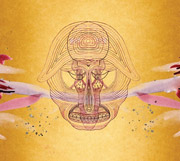 Devendra Banhart is hard artist to pin down.  The alt-folk singer/songwriter is a minor mainstream celebrity, having dated the likes of Natalie Portman and Drew Barrymore.  The Houston-born, but Venezuelan-raised Banhart doesn’t just draw from Spanish sounds, but even sings in the language at times, and also looks to French New Wave and other sixties/seventies styles.  Still relatively young, yet he’s also got one of the most famous beards in indie-dom.  And with What Will We Be, his first major label release, Banhart is even more varied and interesting.  Or, to put it another way, you won’t hear the same What Will We Be every time you listen to it.

Click here for photos of Devandra Banhart at 2012 Governors Ball in New York, NY in the QRO Concert Photo Gallery

Click here for photos of Devendra Banhart at Music Hall in Williamsburg in Brooklyn, NY on November 23rd, 2009 in the QRO Concert Photo Gallery

What kind of styles, what kind of Banharts, are on What Will We Be?  There’s the calypso-esque charm of opener “Can’t Help”, followed by the sunny, choral stripped flamenco in “Angelika”.  Banhart employs a subdued, but getting closer, piano on “First Song For B”, but a country-mellow-mumble on the prior “Goin’ Back To the Place”.  He can go sly, with a funky backbeat, such as on “Baby” or “16th & Valencia”, but also bring a sad sixties pastoral, like with “Last Song For B” (which immediately follows “First Song”) or “Meet Me At the Lookout”.  Maybe most frequent is the cabaret-jazz, from “Chin Chin & Muck Muck” to the more removed “Maria Leonza” and the subsequent Francophile “Brindo” (sung in French).  But the most standout is the sixties/seventies, Dylan/Dead/late Beatles “Rats”, with psych-guitar and up-psych moments.  And Banhart ends it all with reggae rhythms in “Foolin'”.

What Will We Be doesn’t just have massive diversity; it’s also diverse with sounds that you don’t hear as much these days. Obviously, any listener will like some sounds & songs over others, depending on their taste, and it’s hard for anyone to like everything on the record, but you won’t hear the same Devendra Banhart twice.