An already packed Fleece venue in the heart of Bristol and a stone’s throw from the river welcomed DIIV.... 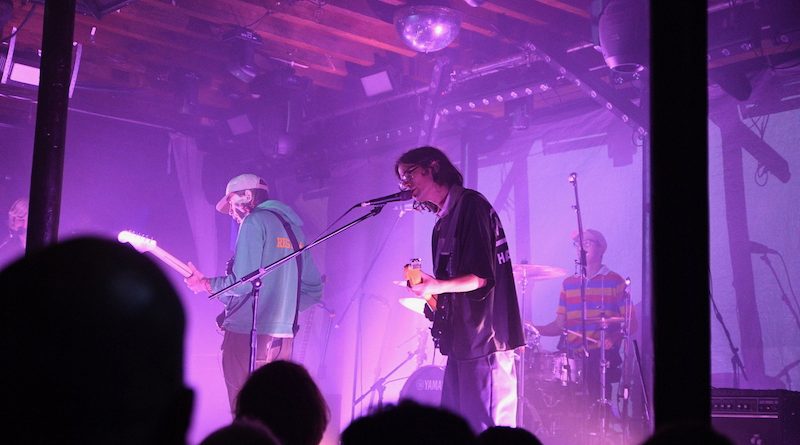 An already packed Fleece venue in the heart of Bristol and a stone’s throw from the river welcomed DIIV on Wednesday, August 24th, with stage support band Ditz, who hail from Brighton.

What followed was a well-received tight set from Ditz, dominated by an incredible pounding rumbling bass and the drummer shirtless centre front of the stage smashing the bee Jesus out of his drum kit and this onslaught continued for the rest of the set. The Great Regression is the debut album from the band and this was the focus of the set, along with a sprinkling of tracks from their various EPs.

Ditz is much heavier than fellow Brighton band Royal Blood and will be loved by fans of The Idles and Pigs Pigs Pigs Pigs Pigs Pigs Pigs. They were well received by the sell out crowd who had arrived early and were soon under the spell of this tight unit and the riveting front man (Cal) who covered all parts of the small stage whilst a mosh ensued in front of him.

Listening to the debut album and the sprinkling of EPs over the past couple of years, this is a band definitely worth checking out in 2022 and there are opportunities to them appear at (fellow Brighton residents) Sea Power’s Krankenhaus Festival from the 26-29 August before heading over to Europe playing Belgium, France, Germany before returning to the U.K. for more dates in places like Nottingham, Cardiff and London.

Photos of DIIV at 2016 Northside Festival in Brooklyn, NY

Photos of DIIV at 2015 Governors Ball in New York, NY

Photos of DIIV at Brooklyn Bowl in Brooklyn, NY on January 13th, 2013

Photos of DIIV at Monarch in Berlin, Germany on August 28th, 2012

The excitement grew around the packed sold-out venue with no room to move as DIIV took to the stage and the excitement grew with them kicking off with “Loose Ends” from the 2016 album Is the Is Are (QRO review) with Zachary Smith (vocals/guitar) hunched over his mic in his Nine Inch Nails sweatshirt. At times his voice appeared to be a whisper, as was the DIIV way with vocals almost taking a back seat behind the swirling guitars and drums.

Andrew Bailey (guitar) was a distinctive character with a baseball cap on backwards and his hair in bunched to the side. He took prominence in the middle of the stage. He glided through the fretboard of his Fender Jazzmaster playing fuzz laden notes and with his darkened eye sockets staring, and at times appearing to glare into the crowd as he glided hypnotically rocking around the stage on the balls of his feet.

“Under the Sun”, also from the 2016 album, was an up-tempo reverb soaked that saw the room bouncing. However, when Colin Caulfield (bass) started the notes to “Doused” from their 2012 debut album Oshin (QRO review), the venue went mad with Ben Newman (drums) building the tempo.

“Taker” from the last album Deceiver in 2019 was a wall of fuzz and distorted guitars crashing through like chainsaws, as was “Like Before You Were Born”. There are few words here and these from Caulfield, but it’s often difficult to make out what he is saying, but those that did hollered and during the quiet moments where DIIV tuned and adjusted pedal boards, the sold-out crowd kept the noise up.

The band returned for an encore with “Blankenship”, again from Deceiver, was the perfect ending with again the audience responding with whole room grooving away as DIIV rocked away on stage. There is a beauty to the music of DIIV, sure some melancholy but at times damn right euphoria which sweeps you off your feet and leaves you wanting more.

Diiv return to Europe to play a few last festivals before returning to the U.S. and hopefully it won’t be long till they return and with a new album.

The Kooks – 10 Tracks To Echo In the Dark