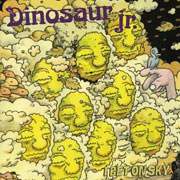 What did we ever do without Dinosaur Jr.?  The bad blood between singer/guitarist J Mascis (QRO solo album review) & singer/bassist Lou Barlow (QRO solo album review), the latter’s departure, Mascis hanging up the ‘Dinosaur Jr.’ name at the end of nineties – it all seems like only a bad dream at this point, thanks to the band’s triumphant second life.  I Bet On Sky is the trio’s (with drummer Murph – never forget about Murph…) third post-reunion record, and once again, it’s right up there with anything else in their storied catalog.

In the late eighties & the early nineties, Dinosaur Jr. was the perfect blend of shredding guitars, grunge backbeat, and alt-punk greatness – and the group has kept it up with their new material, Beyond (QRO review), Farm (QRO review), and now I Bet On Sky.  Sky has all the classic Dinosaur hallmarks: the resigned rock loss in pieces like “Don’t Pretend You Didn’t Know” and “What Was That”, evocative emotions on “Stick a Toe In” and “Almost Fare”, and just the right level to Mascis’ killer guitar solos with “Watch the Corners” and “Pierce the Morning Rain”.  Too often guitar solos feel indulgent and out-of-place, but for Dinosaur Jr., they fit in seamlessly with the overarching music and emotion.

Admittedly, I Bet On Sky does immediately sound like a Dinosaur Jr. record – but that’s a good great thing.  It even has the requisite Lou Barlow tracks – “Recognition” could be a lost piece from his post-Dinosaur (and still going) band Sebadoh (QRO live review), plus there’s a catchy song that could have been from their early nineties MTV grunge era (“I Know It Oh So Well”).  But there’s no need for Dinosaur Jr. to suddenly change everything up – like Beyond & Farm before them, I Bet On Sky is another great Dinosaur Jr. album.