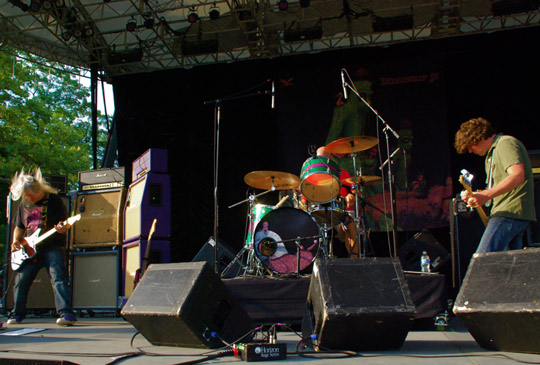 Click here for photos of Dinosaur Jr at SXSW 2009 in Austin, TX in the QRO Concert Photo Gallery

It’s been a rather disappointing summer, concert-wise, in New York.  Last summer The Big Apple had the first season of All Points West (QRO photos) – with two nights of Radiohead (QRO photos) – and the last season of The Pool Parties at McCarren Park Pool (QRO venue review), not to mention Obamamania.  This summer, rain nearly wrecked the Radiohead-less second year of APW, and Williamsburg Waterfront (QRO venue review) just couldn’t live up to The Pool – oh, and there was also the little fact that the world economy had collapsed in between.  Rain also marred Waterfront’s Pool Parties, River-to-River Festival at South Street Seaport (QRO venue review), and RiverRocks Hudson River Park (QRO venue review), while Castle Clinton (QRO venue review) took a step down from last year’s great alt-line-up (St. Vincent, Ted Leo & The Pharmacists…) to celebrate the 40th anniversary of Woodstock.  All in all, couldn’t compare to the summers of ’08 (QRO Outdoors in New York 2008) or ’07 (QRO Outdoors in New York 2007).  So thank god that the one-and-still-only Dinosaur Jr closed out Central Park SummerStage on Sunday, August 16th. 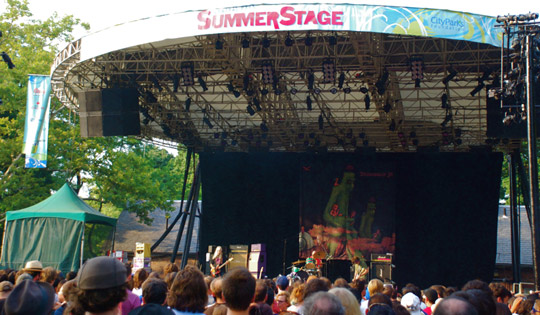 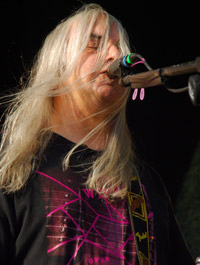 A late announcement, Dinosaur Jr’s SummerStage show – the last free SummerStage show of the summer – was easily one of the most-anticipated outdoor events in New York, and with good reason.  When the original Dinosaur Jr line-up of J Mascis (guitar/vocals – QRO solo photos), Lou Barlow (bass/vocals – QRO solo photos), and Murph (drums) reunited in 2005, it was the biggest alt-rock reunion since The Pixies, but they were only touring re-releases of their old records from the eighties.  Yet somehow, the trio has stuck together, releasing the amazing new Beyond (QRO review) in 2007 (and putting the no-new-stuff Pixies to shame…), and Farm (QRO review) this year.  So seeing them for free at Central Park SummerStage was pretty much a must-see. 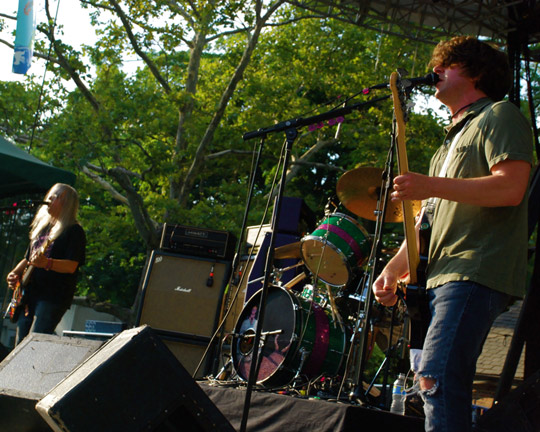 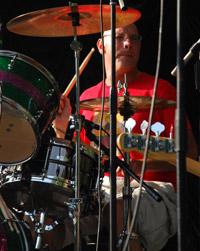 It was actually a return for Dinosaur Jr to SummerStage (QRO venue review), as four years ago, in the midst of their first re-release tour, they hit the Stage (this time it was a paid benefit show, though).  That performance would actually become notorious for what happened to the opener, Broken Social Scene (QRO spotlight on) – their producer Dave Newfeld tried to buy weed in Washington Square Park before the show, and was caught & beaten up the NYPD (and later got a settlement!).  This time, opener The Walkmen (QRO photos) were treated much better (locals knew better than to buy weed in Washington Square Park, which just reopened after a face-lift…), and Dinosaur Jr had a ton of new material (but still looked much the same – Mascis like Gandalf the guitar-wizard, surrounded by four-count ‘em-four speakers, Murph bald as a cue ball, and Barlow still disturbingly young-looking, even barefoot). 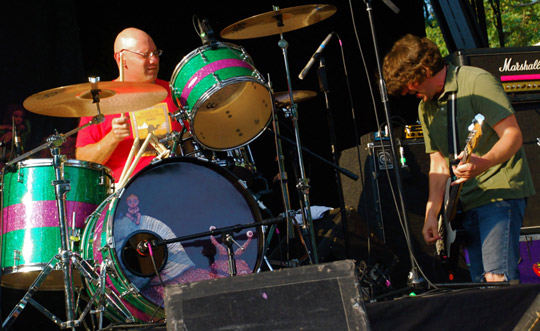 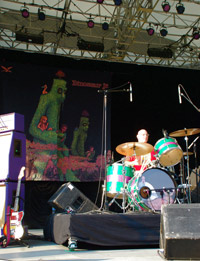 Farm naturally dominated the set (and the stage – the cover was part of the backdrop), at almost half, with great tracks like “I Want You To Know”, “Pieces”, and “Over It”, as well as Barlow’s “Imagination Bind” (though, on the set list for Mascis, who sings all the other songs and was/is notoriously controlling, “Bind” was listed as just “Lou”… – QRO photo).  However, the next-most frequent record was not Beyond (which frankly could have used a little more attention, like playing “Almost Ready”), but the eighties classic You’re Living All Over Me, back in the days of the charter trio, with opener “Tarpit” (a piece that has improved with time), 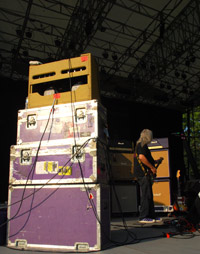 plus the always-excellent “In a Jar”, and the band’s seminal cover of The Cure’s “Just Like Heaven” (back at that ’05 SummerStage show, one fan incessantly shouted out for “Heaven”, throughout the whole set – it took four years, but there ya go, mister…).  Dinosaur Jr were understandably light on post-Barlow Green Mind & Where You Been and post-Murph Without a Sound, but did find time for one of the best songs of each album, “The Wagon”, “Out There”, and “Feel the Pain”, respectively. 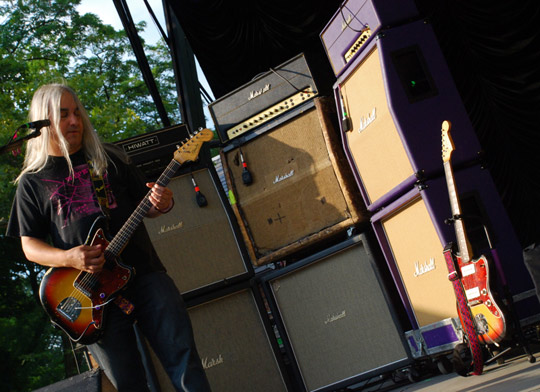 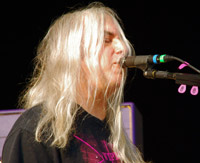 After a cool June & July, August 16th may have felt like only the beginning of the summer, but it was actually pretty much the end, as nearly all free outdoor concert series ended that weekend, from RiverRocks’ Yeasayer show on the Thursday before (QRO live review) to River-to-River’s School of Seven bells show on the Friday before (QRO photos).  Dinosaur Jr don’t come back to New York until late November, when they open at Terminal 5 (QRO venue review) for Sonic Youth (QRO live review) – pretty much the only band Dinosaur Jr should ever open for (and that includes Built To Spill – QRO photos).  Hopefully this fall NYC won’t need them as badly as we did this summer. 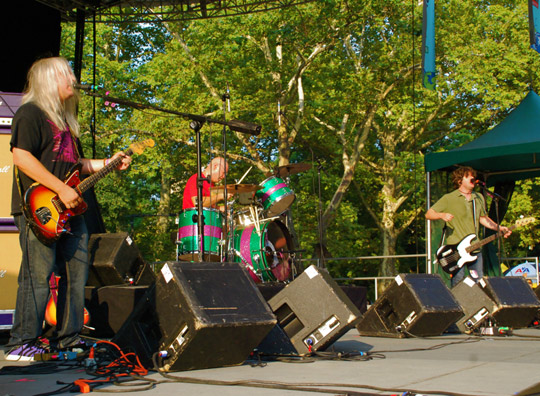 A.A. Bondy : When The Devil’s Loose