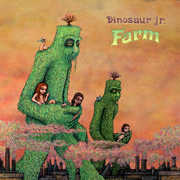 Just in case there were any doubters, let it be official: the greatest alternative musical reunion of the twenty-first century is that of Dinosaur Jr.  Mission of Burma (QRO live review) may have been the first, and The Pixies the biggest (and everyone’s eagerly anticipating the return to Blur of Graham Coxon – QRO photos), but with Farm, the band’s second post-reunion record, there can be no doubt.  Despite all the bad blood of the nineties that split first singer/bassist Lou Barlow (QRO photos), then drummer Murph, from singer/guitarist J Mascis, the band has reunited, first touring re-releases of early material, and then, with 2007’s Beyond (QRO review), putting out one of the, if not the best Dinosaur Jr. album ever.  Everyone has been waiting for the other shoe to drop, for the rug to be pulled out from under, but that shoe & that rug are just some more great music, as the band once again combines alt-, grunge, and guitar-rock, going a little harder on Farm.

First things first: Farm is not quite as good as Beyond, but that’s a very high standard.  Beyond was naturally lifted up by just the sheer awesomeness of Dinosaur Jr. having put something new out at all, and with the original trio!  Beyond also drew from all the stages of the Dinosaur Jr. name, from the early hard-rock days to the more popular grunge-era, post-Barlow days, to the final, Mascis-alone higher guitar wash.  Farm moves the needle back a bit, not entirely to the initial, Dinosaur period of the trio, but averaging out somewhere in the late eighties Bug/Green Mind era, right around when Barlow left.  While 1997’s Hand It Over, the last record Mascis released under the ‘Dinosaur Jr.’ moniker, is definitely the weakest of the records under that name, Farm does see the band shrink their reach from the wide-ranging Beyond.

But what they do hold is so good that you can be forgiven for not caring.  It all starts with opener/single “Pieces”, which employs the singular guitar-rock-to-expand sound that has been the hallmark of Dinosaur Jr.  Other tracks like “I Don’t Wanna Go There” keep in that approach, but there’s also the road-drive Dinosaur, like on “I Want You To Know” and “Over It”, which is just as good – “Over It” is catchy and enjoyable enough to feel like a single from Where You Been, the band’s most commercially successful record (thanks to the post-Nirvana glow of 1993).

Dinosaur Jr. does have a bit more difficulty with the sadder fare, getting some mixed results.  The loss-leaden “Ocean In the Way” is good, but is outshined by the following heartbreaker “Plans” (with one of many excellent guitar solos from Mascis).  The downbeat “Said the People” is a nice change of pace to Farm, but a little too stark, as it makes the following “There’s No Here” have to rebuild Farm’s energy.  Better done is what follows that, “See You”, which sways sadly, but with some sweet swings to the guitar.

And it should never (never) be forgotten that Barlow has a couple tracks, “Your Weather” and closer “Imagination Blind”.  Barlow plays his vocals more restrained, and his songs are a bit stranger, but can stand up on their own and nicely break the pace (though it might have been better had “Imagination” not been the last track on Farm).  Mascis’ supposedly controlling attitude was what led to Barlow’s firing/departure, so it’s double great to see the bassist doubling his song output from Beyond on Farm.

Mascis’ great guitar work can make songs on Farm a bit overextended, though one tends not to notice (“Said the People” is an exception, thanks to its sadder, more restrained nature – not to mention the fact that Mascis even sings on it, “Can’t let it drag on”…) – certainly superior to the guitar-wankery of jam bands, hard-rock bands, and even some indie-musicians who’ve fallen a little too in love with their guitar [cough-Stephen Malkmus-QRO live review-cough].  And it’s nice to see Mascis embracing all the comparisons of him to Gandolf (of Lord of the Rings), with his long, white hair – see the Ents on the cover of the album.  Reunions can be a dicey thing, and even if they don’t go awry, can often fail to meet outmatched expectations.  But Dinosaur Jr. is breaking that trend and remaking their own.