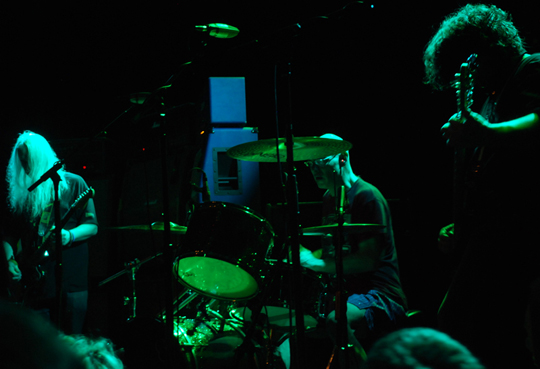 Click here for photos of Dinsoaur Jr. at 2012 FYF Fest in Los Angeles, CA in the QRO Concert Photo Gallery

Click here for photos of Dinsoaur Jr. at 2012 LouFest in St. Louis, MO in the QRO Concert Photo Gallery

Click here for photos of Dinsoaur Jr. at 2012 80/35 Festival in Des Moines, IA in the QRO Concert Photo Gallery

Click here for photos of Dinsoaur Jr. at SXSW 2012 in Austin, TX in the QRO Concert Photo Gallery

Is there more that can be said about the greatness that is Dinosaur Jr.?  One of the best punk bands of the eighties & best grunge bands of the nineties (if you care for those sort of labels), they were also the greatest alt-rock reunion of the just-finished decade.  While other reunions were more anticipated (like Pixies – QRO live review), and still others have been more prolific since getting back together (like Mission of Burma – QRO live review), none have been as good reunited as Dinosaur Jr.  2007’s Beyond (QRO review) and last year’s Farm (QRO review), the first under the ‘Dinosaur moniker’ in ten years, and the first with the original line-up in almost twenty, were as good as anything the band had previously put out.  And they’re just as consistent live – especially in smaller confines like Brooklyn’s Music Hall in Williamsburg on Sunday, January 17th. 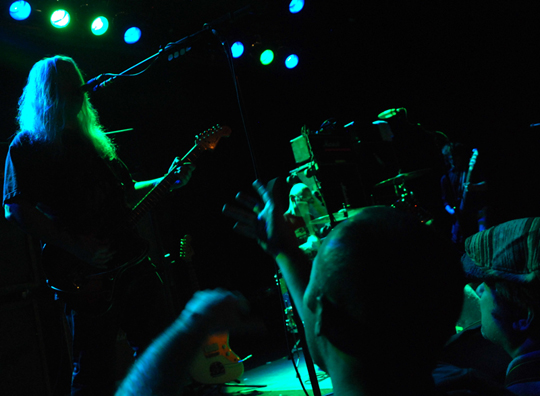 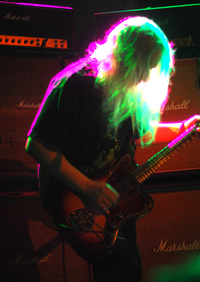 Indeed, before Dinosaur Jr. went on, the show didn’t feel like a sold-out, ‘small-for-them’ event, with still some room to move up front – but that’s because only the brave, or foolhardy, would get that close to the speakers.  Singer/guitarist J. Mascis had his bank of amps behind him, and another pointing at him, while singer/bassist Lou Barlow had two stacks behind him, and Murph & his drum kit were front and center (one of the advantages of playing in a trio).  And there were still many die-hards up front, the kind of fans who would cheer the roadie for tuning & checking the equipment. 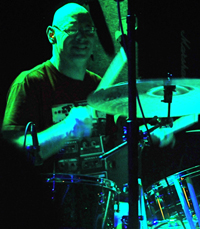 Dinosaur’s fanbase is more diverse than you might think: while there were big punks, mooks who were falling over wasted before Dinosaur ever went on, and one drunk guy up front yelling for the band to come on because, “Some of us have to work tomorrow!” (working on Martin Luther King Day – and apparently, hung over?  That’s just wrong…), there were also older fans (steering clear of the tottering mooks), younger super-fans right up front (one demanded & received a high-five from Barlow), and yes, even g-g-g-girls rockin’ out – like those in the way of QRO’s camera during “Freak Scene” (off of 1988’s Bug, the last with the original trio until the reunion):

Barlow, Mascis & Murph first reunited to tour the re-releases of their early records (after finally getting the masters from iconic eighties punk label – and notoriously tight-fisted with rights & royalties – SST), and it’s really no surprise that even now, their set lists (QRO photo) have been primarily dominated by Beyond & Farm, but the rest mostly from the early days, before Barlow’s 1989 departure/expulsion & Murph’s 1994 exit.  Bug, 1987’s You’re Living All Over Me and 1985’s at-the-time-self-titled debut Dinosaur (apparently, some Jefferson Starship spin-off was already named ‘Dinosaur’, so the band had to add the ‘Jr.’) comprised just under half the set, from openers “Bulbs of Passion” (the best off of Dinosaur), Bug‘s “Budge”, and You’re Living‘s “Tarpit” to closers “Freak Scene” and, “This song is off our first record, but it was called ‘Dinosaur’…”, “Gargoyle” – with a double-dose of You’re Living in the encore return, “Kracked” and “Sludgefest” (the former indeed replacing the set list’s “Wagon”, from 1991’s Green Mind). 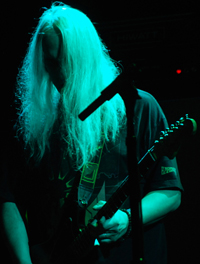 Some fans who found Dinosaur Jr. during their early nineties, grunge-era mainstream success, might be disappointed that the band doesn’t play more from 1991’s Where You Been or 1994’s post-Murph Without a Sound.  Those records are more accessible than earlier works, thanks to greater melody from the solo control of the band by Mascis (QRO photos solo) by then.  But Dinosaur Jr. haven’t completely left that era by the way side, as they performed one of the best from each, Where‘s weary classic “Get Me” and Without‘s standout single, “Feel the Pain”.

Click here for photos of Dinosaur Jr. at SXSW 2009 in the QRO Concert Photo Gallery

Still, twenty-first century Dinosaur is a Mascis-Barlow-Murph affair, including Barlow contributing his own pieces to Beyond, Farm and live, with Beyond‘s “Back To Your Heart” and Farm‘s “Imagination Blind”.  And all that time away, in post-Dinosaur act Sebadoh (QRO live review) and on his own (QRO solo album review), has certainly improved Barlow’s chops – what’s more, the songs didn’t feel like outliers in a set where Mascis otherwise sings.  And putting Murph up front let Barlow play off the drummer like Mascis does with his amps. 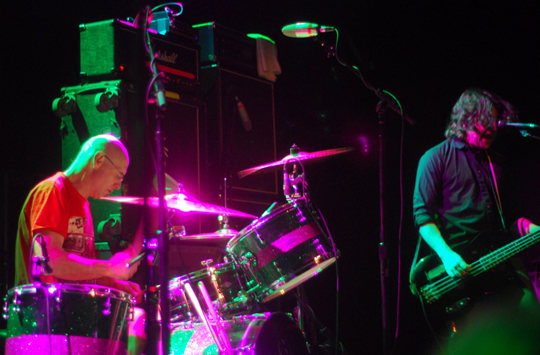 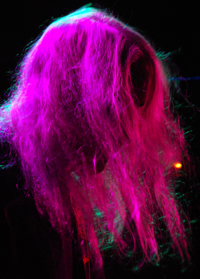 “Imagination” & “Get Me” led into the middle, Beyond/Farm portion of the evening, where you have to be amazed at how well those new records stand up to the old in pieces like “Pieces”, “Plans”, “Crumble” and “Over It”.  The set list was the same, night-to-night – Barlow, after blowing his nose after “Crumble”, remarked that he’d blown his nose at the same point in the set the night before.  Barlow is the most affable of the three, as Mascis let his guitar (and his long white hair) do the talking, while Murph was behind his kit (which did seem to need a lot of adjusting, at least early on) – there were certainly more shouts of “LOU!” than “J!” (the hippest shout “MURPH!”).  When the band returned for their encore, while Mascis was tuning up, Barlow joked that his bass was, “A ‘Mike Dirnt Original’.  Of Green Day.  Yeah, they fuckin’ rock!…” – and proceeded to play a bit of the famed opening bass line of the ‘punk’ act’s (QRO album review) “Longview”, before heading into “Kracked”.

But if you’re a fan of Dinosaur Jr., you already know pretty much everything that’s been said here already.  You know their large, but surprisingly diverse, audience, their predilection for playing eighties material over better-known nineties songs, the amazing strength of their two reunion records, how great it is to have the original trio back, and how great it is to have Dinosaur Jr. back.  And knowing all of that already doesn’t make seeing them any less sweet.

Dinosaur Jr. closing out with “Sludgefest” live at Music Hall in Williamsburg in Brooklyn, NY on January 17th, 2010: