<img src="http://www.qromag.com/wp-content/uploads/2012/04/dinowalrusbestbehavior.jpg" alt="Dinowalrus : Best Behavior" /><br /> Dinowalrus build upon their psychedelica, establishing a whole new sound, all of their own. ... 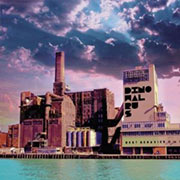 Psych-rock has come back in a big way, not just in the mainstream but also in indie, as artists like The Black Angels (QRO live review) bring back the swirling sounds of the seventies just as surely as sixties Beatles pop and fifties garage-rock have been brought back.  But psychedelica still has the same inherent disadvantages that it had forty years ago, risking getting too deep into the psychedelia as to lose the listener, or come off as feeling like an indulgent jam from the artist.  Many neo-psych acts have fallen into this, but Brooklyn’s Dinowalrus didn’t on debut % (QRO review), which was as accomplished a new psych album as the neo-genre has produced.  Yet % was still "a conceptually difficult title to wrap your head around and Dinowalrus can be a conceptually difficult band to wrap your ears around."  But follow-up Best Behavior makes their expert psych accessible to us all.

One could have complained that % lacked a single, and Dinowalrus answered that in late 2010 with "Phone Home From the Edge" (QRO review), which "keeps the band’s kraut/psych/whatever journey while making it go down both smoother and sweeter."  Best Behavior includes "Phone Home" and lives up to it.  The psych(/kraut/whatever) is fuzzier and more expansive, not to mention brighter, but is also laid atop a catchier, even danceable beat on songs such as "Beth Steel" and "RICO".  Meanwhile, the back half to Best sees Dinowalrus put a driving force behind their sound on pieces like "What Now" and "Burners".

Psych loyalists will likely complain that Dinowalrus ‘isn’t psychedelic enough anymore’ or some such on Best Behavior, but the band doesn’t trade in some of their psychedelica – they build upon it, by making it more than just psychedelic, more than just ‘neo-psych/kraut/whatever’, but rather establishing a whole new sound, all of their own.