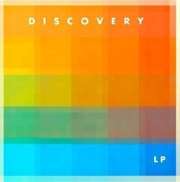 Ra Ra Riot & Vampire Weekend have both rocketed to fame relatively early, on the backs of debut LPs The Rhumb Line (QRO review) and Vampire Weekend, respectively.  While both young bands worked on their follow-ups and try to avoid the dreaded sophomore slump, Ra Ra Riot singer Wesley Miles (QRO interview) and Vampire Weekend multi-instrumentalist Rostam Batmanglij teamed up (along with guest spots from a few more friends) as Discovery on LP.  Unfortunately, the lame electronica & remixes is worse than any sophomore slump.

Click here for photos of Ra Ra Riot, on the bill with Vampire Weekend, at Maxwell’s in Hoboken, NJ on August 11th, 2007 in the QRO Concert Photo Gallery

In Ra Ra Riot, Miles’ high vocals are well matched to the band’s collective sound, but with Batmanglij’s high electronica, it’s all too much.  They seem to be going for some sort of high-dance electronica (in the spirit of an even more recent breakthrough, Passion Pit – QRO album review), but it’s really just sub-par.  The remixes of Jackson 5’s “I Want You Back” and Riot’s own “Can You Tell?” stand a bit above the fray, thanks to stronger source material, but are totally unnecessary (though you can’t blame the former for being spectacularly badly timed: now it sounds like a tribute…).  Angel Deradoorian of Dirty Projectors (QRO album review) provides nice harmonies when she guest-spots on “I Wanna Be Your Boyfriend”, but the track sounds like a Dirty Projectors remix: nice harmonies, but even more arrhythmic.  LP does reach middling level when Vampire Weekend singer Ezra Koenig guest-spots on the single-ish “Carby”, but most of the record is the kind of lame stop/start key-beat electronica that anyone can make on a Casio.

Side projects from blowing-up artists should always be taken with a grain of salt, as they’re really just something to fill in the time before their next ‘main’ record.  However, sometimes they can be excellent: witness The Postal Service, the pairing of Benjamin Gibbard of Death Cab For Cutie (QRO album review) and Jimmy Tamborello of Dntel (QRO album review).  Their Give Up practically introduced indietronica to the wider world.  If Batmanglij & Miles were trying to ape Gibbard & Tamborello (who are seemingly never going to put out another Postal Service record – and you thought the post office was slow…), nice try, but go back to your day jobs.