<img src="http://www.qromag.com/wp-content/uploads/2012/10/divinefitsathingcalleddivinefits.jpg" alt="Divine Fits : A Thing Called Divine Fits" /><br /> When two or more acclaimed musicians team up for a project, hope is mixed with trepidation. ... 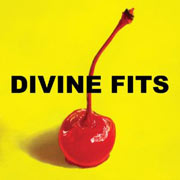 When two or more acclaimed musicians team up for a project, hope is mixed with trepidation.  The term ‘supergroup’ gets excitedly bandied about, and naturally a great artist + another great artist = a really great band, right?  Yet so often these outfits are less than the sum of their parts, with too many chiefs, not enough Indians.  What’s more, they don’t have the artists’ impressive catalog to fall back on – indeed, these new groups can seem like unnecessary excursions keeping them from doing what they should be doing, their acclaimed day job.  And sometimes these are excuses to go in a wildly different direction that nobody asked for.  What looks good on paper doesn’t always work in practice.

But sometimes it does, at least more or less.  While Divine Fits, the new team-up of Britt Daniel (Spoon) and Dan Boeckner (Wolf Parade, Handsome Furs), along with Sam Brown (New Bomb Turks), isn’t more than the sum of its parts, those are great parts, and debut album A Thing Called Divine Fits still delivers.

Click here for photos of Divine Fits at CMJ 2012 in New York, NY in the QRO Concert Photo Gallery

Click here for photos of Divine Fits at 2013 CBGB Festival in New York, NY in the QRO Concert Photo Gallery

Click here for photos of Divine Fits, at their first official show, at Beerland in Austin, TX on August 1st, 2012 in the QRO Concert Photo Gallery

While hearing Boeckner + Daniel made one wonder what the frenetic sharp energy of Wolf Parade + the sharp echo indie-rock of Spoon would make (other than something sharp), the base of Divine Fits is synth beats.  Whereas their prior efforts still treated the guitar as central, Boeckner & Daniel have given into today’s keyboard-obsessed music scene.  Instead of Boeckner + Daniel, Divine Fits is more Boeckner + more keys and Daniel + more keys.  Most of the tracks distinctly sound like either Spoon or Wolf Parade – tech-beat Spoon in “Flaggin’ a Ride”, cooler, even dance-beat Spoon with “Would That Not Be Nice”, resigned, slow Spoon on “Shivers”, and even more echoing Spoon in “Like Ice Cream”; meanwhile, Wolf Parade is synthed-up with “Baby Get Worse”, yet more hopeful on “Civilian Stripes”, and more evocative in “For Your Heart”.  Perhaps only “What Gets You Alone” actually really mixes frenetic Boeckner & indie-rock Spoon, while those still unmentioned don’t stand out for any reason (such as the somewhat run-of-the-mill beat-stop with opener “My Love Is Real” or straight synth-shadow on “The Salton Sea”).

Dan Boeckner & Britt Daniel are accomplished enough musicians that they didn’t need to team up, but didn’t get in each other’s way on A Thing Called Divine Fits.  The new group is also thankfully something they’re doing during their regular downtime, in addition to their regular work, not instead of (though no word yet on what’s next for Boeckner, with the demise of Handsome Furs and the hiatus of undetermined length for Wolf Parade, while his partner in that, Spencer Krug, works now at his own Moonface, successor/replacement for his prior Sunset Rubdown – QRO live review).  Divine Fits is not the super-supergroup at the high end of your hopes, but is far above what you feared, and, most importantly, worthy in its own right.

MP3 Stream: “What Gets You Alone“