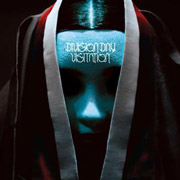 It’s been a few years since the indie music scene around Los Angeles’ Echo Park blew up, thanks to Silversun Pickups (QRO album review) and especially Dangerbird Records.  While veterans like Earlimart (QRO spotlight on) got some attention, there were youngsters who got a few looks as well, like Division Day, who in 2007 finally released Beartrap Island (QRO review), after much work.  Now the four young men follow-up that fourteen-track release by signing to Dangerbird and putting out Visitation, which sees them hone their initially over-wide approach into a driving wash.

Click here for photos of Division Day at Sound Fix Records in Brooklyn, NY on October 24th, 2007 in the QRO Concert Photo Gallery

Click here for photos of Division Day at Maxwell’s in Hoboken, NJ on October 14th, 2007 in the QRO Concert Photo Gallery

Division Day had self-released Beartrap Island in 2006, but for the label release they added a few more songs, making for a somewhat over-varied, even a bit disjointed album (recorded over seven long weekends).  With Visitation, they move away from their younger, more rock-oriented sound into higher, even electronic atmosphere, but kept their driving rhythm.  That comes through right at the start with “Reservoir”, as its opening crash/crush percussion is married to not only dark-road guitar, but also higher vocals, setting the tone for the record.

Not that there isn’t variety on Visitation.  While the following “Malachite” just turns down the percussion and adds some synth, there’s slower, more emotional carry on “Azalean” and “Carrier”.  When Division Day mess with their rhythm, though, they do so at their peril: the off-kilter, muddled beats to “Chalk Lines” and “My Prisoner” both hamper otherwise nice expanses, and “Surrender” unfortunately goes a bit discotronic in its press.  Much better is when they keep that press straightforward, but then add & subtract on top of it, like the dark echo into something grand of “Devil Light”, the stripped-to-tech title track, or the high choral-tronica closer, “Black Crow”.

After the over-stuff Beartrap Island, it’s not surprising that Visitation doesn’t have quite the highs or lows of the near-double-disc debut.  Division Day also have a habit for changing their sound, record to record (akin to The Most Serene Republic – QRO spotlight on), even joking about it, “The New Division Day Recording: Not For Fans of Division Day”.  So it’s good to see them build on some, but not all, of their past.