A few tracks in on Constantopolis and you begin to realize you’re listening to only a tiny fraction of a much larger body of work from Django Voris.... 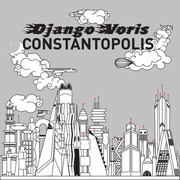 A few tracks in on Constantopolis and you begin to realize you’re listening to only a tiny fraction of a much larger body of work from Django Voris.  From film scores to art installations and even a collaboration project, “Fates” with PJ Norman 100m Records founder who also appears on this record, Voris has been comfortable with making unconventional sounds his entire career.  He joins a collection of artists so idiosyncratic they single handedly create their own genre.  Musicians like Gary Numan, Cabaret Voltaire or Marshall Crenshaw, who explored pop sounds in ways far ahead of their time.

The first track, “Starbird”, introduces Voris’ ensemble orchestral sound and the impressive level of training and talent that comes with it.  The complex arrangement is in the layered, dense sound creating an ever-changing musical landscape out of fantastic elements.  On “Crusade”, a synth-heavy track, an authoritative figure with a robotic soul embraces the raw synth sounds and root sine waves.  Like Thomas Dolby, Voris utilizes elements of all that is gleaming pop and pushes technology to its limits.  But it’s not all looking toward the future; Voris includes classical instrumentation on “The Problem With Dead Bodies” through cello, astral strings and a brass section.  The track becomes a gypsy-esque Klaus Nomi character, using its unique talents in the service of new pop experiments.  Voris forces a clash of styles that shift and camouflage into something familiar enough to relate to without realizing you’ve been fooled.

“Wannabe” directly references electronic dance at first listen.  Layers appear as a waltz beat or rhumba rhythm, with equally bizarre lyrics.  Maybe the depth of instrumentation is distracting, but verses about fighting back barbarians were lost on first listen.  Descriptions of an ancient civilization between the ring-modulated pings of a neon kettle drum.  His grand theatrics remind of Spencer Krug of Sunset Rubdown in this absurdly dense diary laid out to examine, an attempt to rework the ‘80s, embracing previous mistakes and spinning gold out of the unnatural limitations of machines.

Voris leads a chorus of harmonized voices on “Ghostboat”, a rejected Human League b-side with lyrics about demons and ships, bursts of synth with a Beck type of cabaret absurdity.  Somehow there’s a deadly seriousness to this, even when he’s deconstructing melody with deliberately out of tune playing, it’s so rigidly planned it becomes the tuning of a sixty piece orchestra.  It refuses to be broken down; there are things you aren’t going to understand, things that are going to continue to be surprising on multiple listens.  “The World of Tomorrow” even melodically quotes Close Encounters through a bellowing trombone, building this fragment into a choppy plateau that breaks away into the chorus: “Somewhere out there is a future me.”

Constantopolis is a conceptual musical from a future that didn’t happen.  It ignores contemporary trends and manages something unique in a bizarre journey that rewards not over thinking the next change.  You miss the point in examining each intention, or worse yet, figuring out how this fits into a category.  Django Voris has simultaneously absorbed and rejected the last forty years of familiar melody and pop structures to craft his own shiny era of produced pop.