<img src="http://www.qromag.com/wp-content/uploads/2012/06/djangodjangojun14.jpg" alt="Django Django : Live" />Demonstrating how carefully thought out their performance is, Django Django stepped out on the stage dressed in purple, near-matching patterned shirts. ... 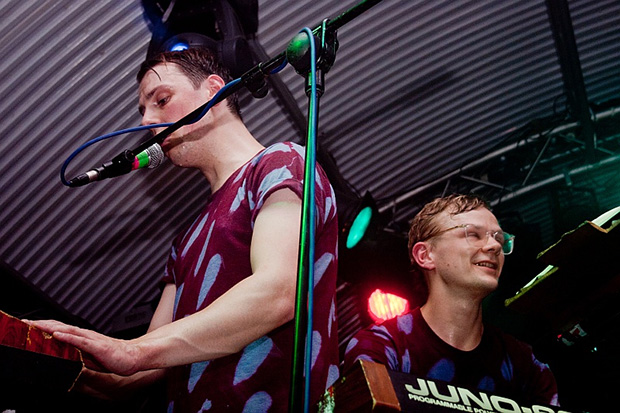 Click here for photos of Django Django at 2015 Lollapalooza in Chicago, IL

Click here for photos of Django Django at 2015 Glastonbury Festival in Glastonbury, U.K.

Click here for photos of Django Django at 2013 Beacons Festival in Skipton, U.K.

Click here for photos of Django Django at SXSW 2012 in Austin, TX

Click here for QRO’s review of Django Django at Glasslands in Brooklyn, NY on March 10th, 2012

Django Django’s self-titled debut had that ‘breath of fresh air’ quality that comes with hearing a new band that playfully blends different styles in unsuspecting ways.  Often times, these sorts of things work because of something like a strangely endearing youthful naiveté, à la Vampire Weekend’s debut.  Despite the playful nature of Django Django, instead an air of professionalism pervades the experience.  It is not surprising to discover that music is actually the second career of singer/guitarist Vincent Neff.  Most buzz bands are not so deliberate in their attack, but most buzz bands are not fronted by a 33-year-old architect.

Demonstrating how carefully thought out their performance is, Django Django stepped out on the stage of The Cockpit in Leeds on June 14th dressed in purple, near-matching patterned shirts.  Resembling a space-age cult, they slowly worked up the packed crowd in the sold-out club with the building, appropriately titled “Introduction” and transitioned seamlessly to the wide-screen sound of “Hail Bop”.  Its lush harmonies filled the room, making the venue (formerly an empty space beneath railway arches) sound surprisingly warm. 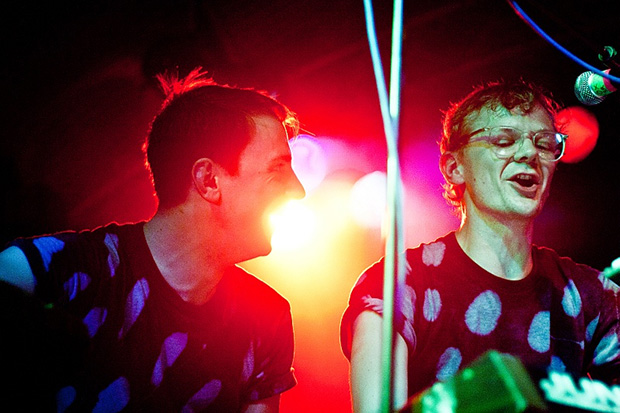 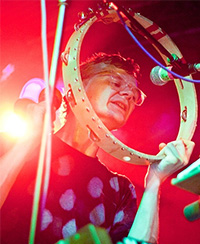 Next came the driving “Storm”, which was first released as a single three years earlier, and also highlights this year’s full-length.  Along the way came another album highlight, “Default”, whose kinetic chorus should be the soundtrack to every bounce house the world over.  Several left turns appeared along the way in the form of the Egyptian-themed and borderline cheesy instrumental “Skies over Cairo”, and “Life’s a Beach” wearing both blues and country influences on its sleeve.

The band played their entire album with the exception of “Zumm Zumm” and managed to let these songs stretch out and breathe enough to go well beyond the corresponding 43-minute on-album runtime.  Their live performance came across as more danceable than expected, but the crowd 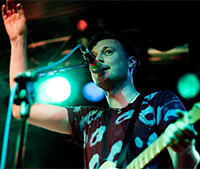 was so packed that this opportunity was not realized during their main set.  However, the crowd thinned out before the encore, and the band came out right on cue to play the synth-driven “Silver Rays”, allowing the crowd to end the night right.  Two dates in Northern Ireland remain until the band’s summer festival circuit, and then another U.K. tour starts in the fall.  Hopefully next will come a U.S. tour beyond the (less than a) handful of U.S. dates they played earlier this year (QRO live review). 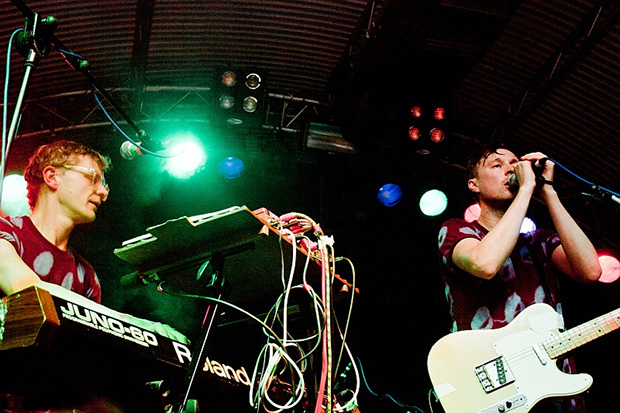