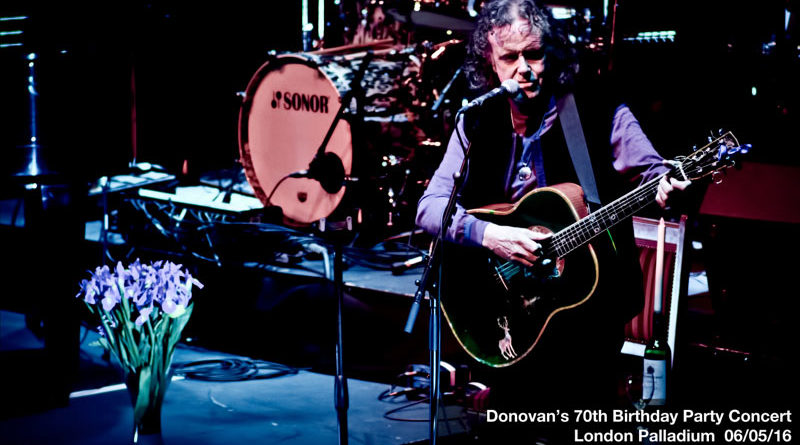 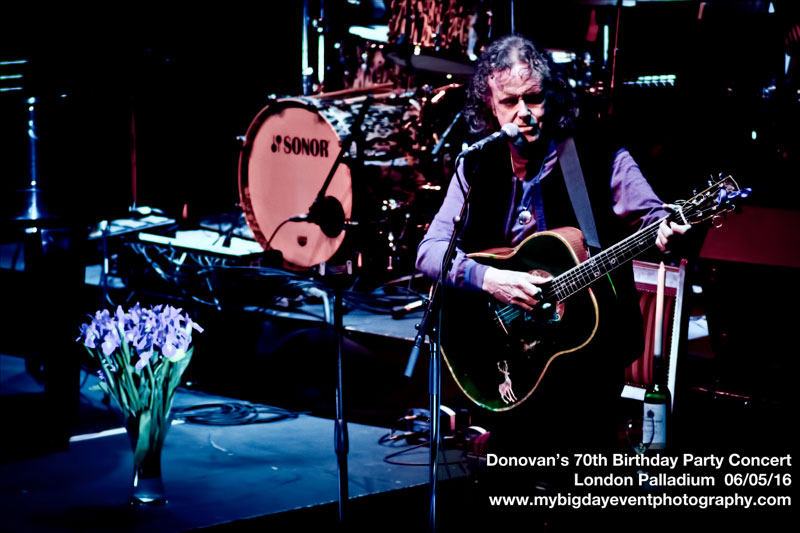 It’s an unwritten rule of music writing that if you find yourself reviewing a gig by an artist who has been around for a while, it’s essential to say at some point that the reader should be aware that the show in question was no mere trip down memory lane. New material must be stressed, changes of style and direction emphasized, risks taken enumerated. Make it all sound just a bit edgy and happening. That’s the law.

But sometimes we are presented with an evening of almost unadulterated nostalgia. And sometimes that’s exactly what’s wanted. Donovan’s 70th Birthday Show at The London Palladium was such an event.

On a stage set with palms and candles in bottles, laid out to recall the heyday of the beat movement, flower power, hippie-dom and the cafes that served as meeting places for the musicians and artists of London in the early sixties (and if you didn’t remember then you probably were there but a couple of verses of “Sunny Goodge Street” and “Sunny South Kensington” are all it takes to settle that), Donovan guided us through his back catalogue, playing sometimes with his three piece band (Gavin Harrison on drums, bassist Paul O’ Brien and pianist John Cameron) sometimes solo, always witty and intelligent and funny and beguilingly romantic. And it has to be said he doesn’t look or sound his age. Could this really be the man who turned up in Dylan’s hotel room in Don’t Look Back, who travelled to India to visit the Maharishi with the Beatles? Surely not. 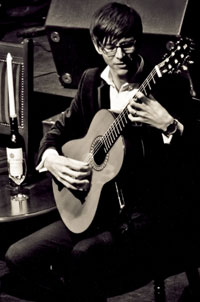 Support came from an eclectic mixture of performers, including an introductory rap by Donovan’s niece, Nils Klofver on the classical guitar (I’ve been listening to John Dowland’s “Fantasia No 7” ever since when I should be reviewing heavy metal) and poetry from Ian Griffiths and Michael Horovitz, the latter’s delivery marked by some of the most compelling owl noises and kazoo blasts ever heard on a London stage. “The owls are turning in their sheep.” I’m going to remember that and say it quite often just to confuse people. While this part of the show was a little baffling at times, it certainly helped conjure up the idea of a 1960s creative community where poets and musicians, writers and artists, could be found in each other company in the pubs and cafes of London.

Of course all the hits were present, “Mellow Yellow”, “Jennifer Juniper”, “Catch The Wind”, “Sunshine Superman” and plenty more besides. They arrived sometimes singly, sometimes in twos and threes, like old friends coming to visit after too long away, and were greeted warmly by an audience who clearly had all the albums at home. Most of the songs in the set were drawn from the earlier albums, the period when Donovan was feted as ‘the British Bob Dylan’ but fifty years down the line it’s striking just how unlike Dylan’s work they are, simpler and less dark, but also more open hearted and singable, like adult nursery rhymes. 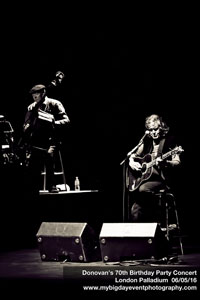 Having said nostalgia was the order of the day, one or two songs seemed to me to arrive dressed in slightly new colours, especially “There Is a Mountain”, a song I’d never really appreciated fully until this gig, and which on the night was so full of joy and celebration it was impossible not to join in. Buffy St Marie’s classic “Universal Soldier”, a song I honestly thought I knew well, also stood out. What a clear sighted and unforgiving song it is, far sterner than the well-meaning folky drivel I had (I’m ashamed to say) remembered it to be. The same might also be said of “Young But Daily Growing”, which gave Donovan the chance to show his traditional folk chops on a pretty bleak piece of narrative, and it was interesting how well the change of tone suited a singer who many of us tend to associate with up beat and humorous material.

Between songs Donovan treated the audience to a series of monologues and digressions, including an extraordinary story about an end of the pier show with The Kinks, The Hollies, The Who and The Walker Brothers, which began with the performers being taken up the pier in a wheeled box to avoid the crowds of girls lining the path, took in an assault from the pit by Roger Daltrey and Keith Moon armed with water pistols and ended up with a spliffing session at Billy Fury’s digs. This story, worth the ticket price on its own, was one of several in which the subject of weed came up. Donovan clearly has a fondness and I hope somebody gets him something really nice for his birthday.

He certainly looks well on it. 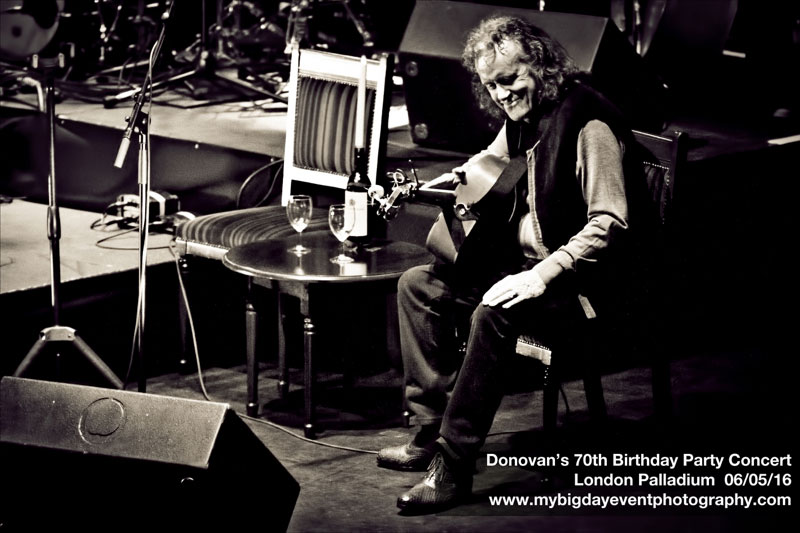