Fifteen of Nottingham’s best music venues opened their doors and celebrated the 10th anniversary of the award-winning Dot to Dot festival. All for £25.... 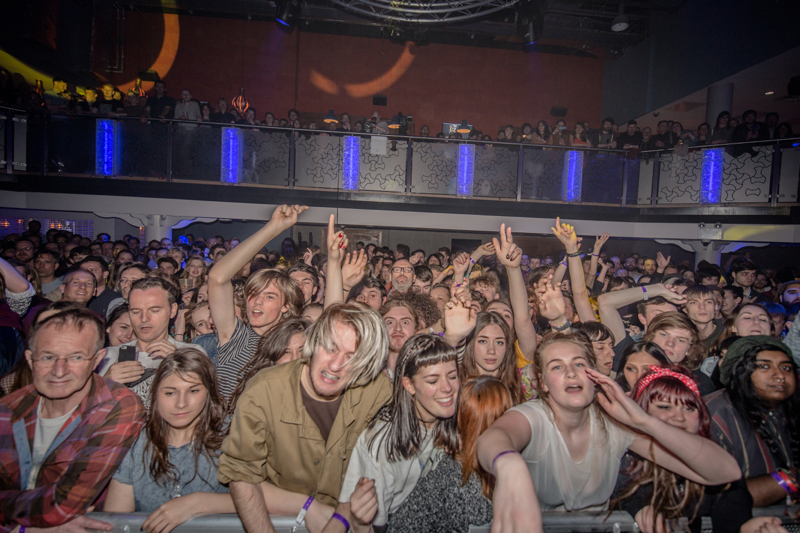 Spend Bank Holiday weekend in Nottingham, you say? Not only did Nottingham host the legendary cycling ‘Milk Race’ on Sunday 24th of May, but also over fifteen of the city’s best music venues opened their doors and celebrated the 10th anniversary of the award-winning Dot to Dot festival. All for £25. 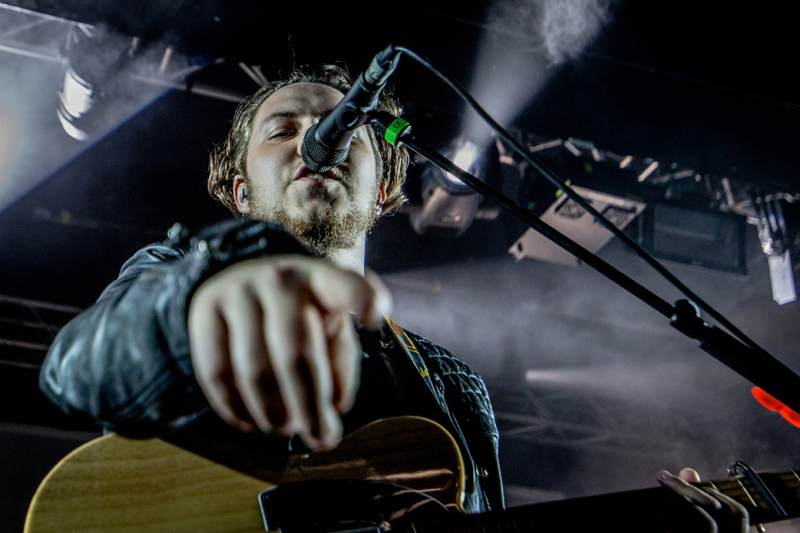 With over 150 artists to choose from, QRO Mag was spoilt for choice. Nine hours into this musical jamboree, Nottingham’s own headliner Saint Raymond (aka Callum Burrows) came on-stage, black leather jacket, black jeans and big smile to wild and noisy delight, belting out catchy pop tunes like “Come Back To You”. He was the star of the show, and he knew it too – worked the teenage Rock City crowd. Definitely a highlight of the day. 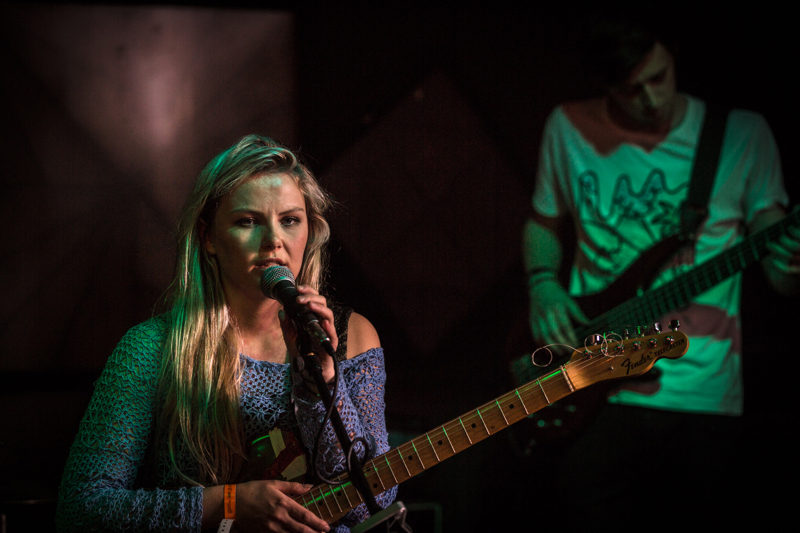 Earlier, grunge three-piece Crosa Rosa had opened the festival at 1pm with the first of two strong sets on the day, this one at The Bodega. But first up for QRO was Keto at Spanky Van Dyke’s. In spite of being the first band on at that venue, singer / songwriter Leah Sinead attracted a decent-sized audience, even though many punters were still collecting their festival wristbands. Leah Sinead’s voice has a wonderful, dreamlike quality, as showcased in recent single, “Change”. Keto are definitely in the ‘one to watch’ category. Check them out on YouTube and Soundcloud. 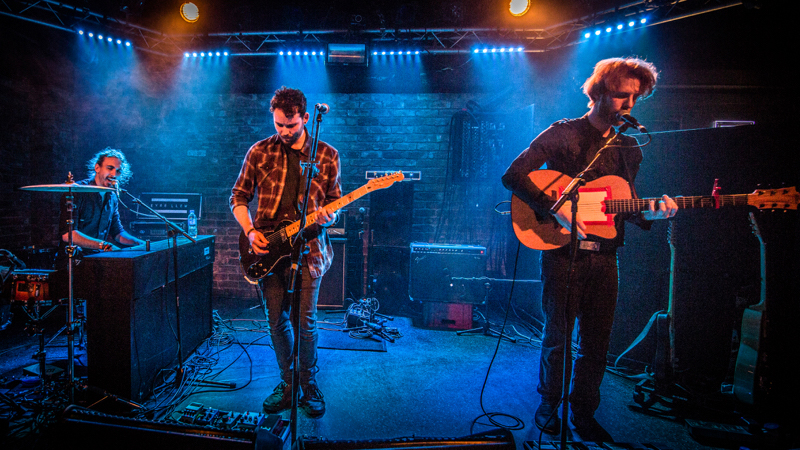 Next up was another Nottingham band, three-piece Eyre Llew. Having played their first gig just a few weeks before (QRO photos), these guys nailed it. Hard work, detailed preparation and mastercraft musicianship are all hallmarks of this band. Delicate, somewhat ethereal, vocals from singer / guitarist Sam Heaton, with beautiful accompaniment by Jack Bennett (guitar) and Jack Gibson-Clark (keys) delivered a rich ambient sounds worthy of your full attention. How good it is to be in a room with people focused on the music alone, no chatting and definitely no camera phones. Gigs like this are meant to be savoured in the moment… 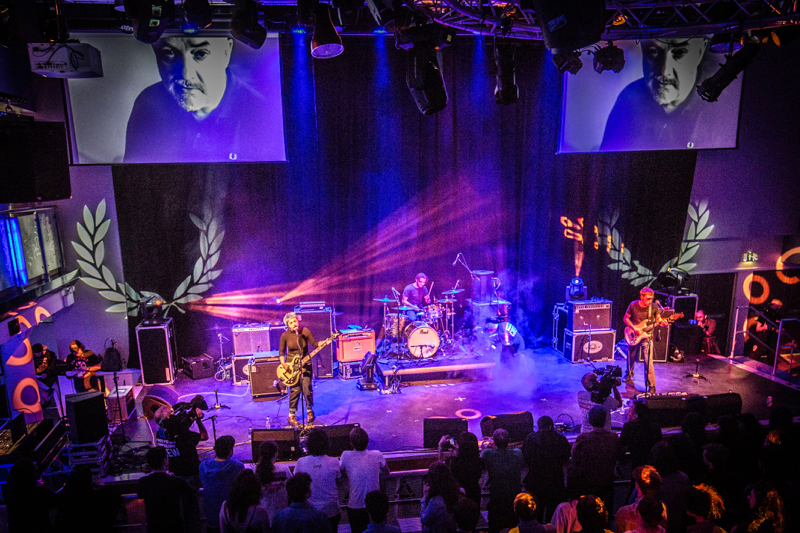 A dash across town followed, to Nottingham Trent University Students’ Union where local grungesters Kagoule were also playing the first of two sets. Cai Burns (vocals / guitar), Lucy Hatter (vocals / bass) and Lawrence English (drums) are firmly established on the national music scene, with a 2014 Glastonbury stage performance in their locker, and dozens of U.K.-wide gigs. With a solid set of tracks taken from their forthcoming LP Urth, Kagoule hit the right spot with another large crowd. Highlights included “Gush” and “Made of Concrete”. 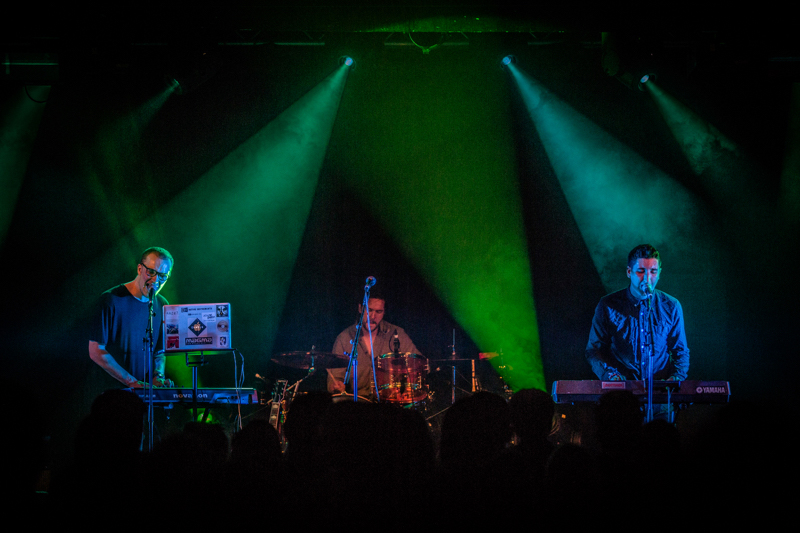 April Towers is another Nottingham-based band generating heat and light. Fresh from a gig in sunny Ibiza, banter-merchants Alex Noble and Charlie Burley’s were firmly at home on the Rock City main stage. Their 30 minute set ended with a couple of electro-pop bangers, “Arcadia” and “No Corruption”. Big things beckon for these guys. 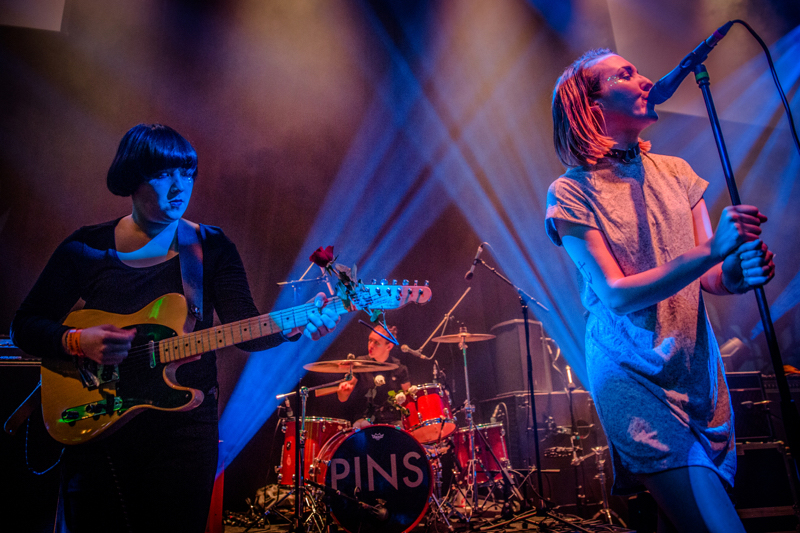 Back at Nottingham Trent University, things were heating up, as Manchester’s four-piece band, PINS, have now become a five-piece with the welcome addition of Kyoko Swan on keys. While some might assume singer / guitarist Faith Vern to be the leader of the pack, this is no one-woman band. Hell, no. With Lois McDonald on guitar, Anna Donigan on bass and Sophie Galpin on drums, as well as Kyoko on keys, PINS are one heck of a band with an impressive armory to shoot you up. “Too Little Too Late”, “Oh Lord” and “Dazed By Yo” were three new-ish tracks off their forthcoming album, Wild Nights, which impressed. Contender for gig of the day. 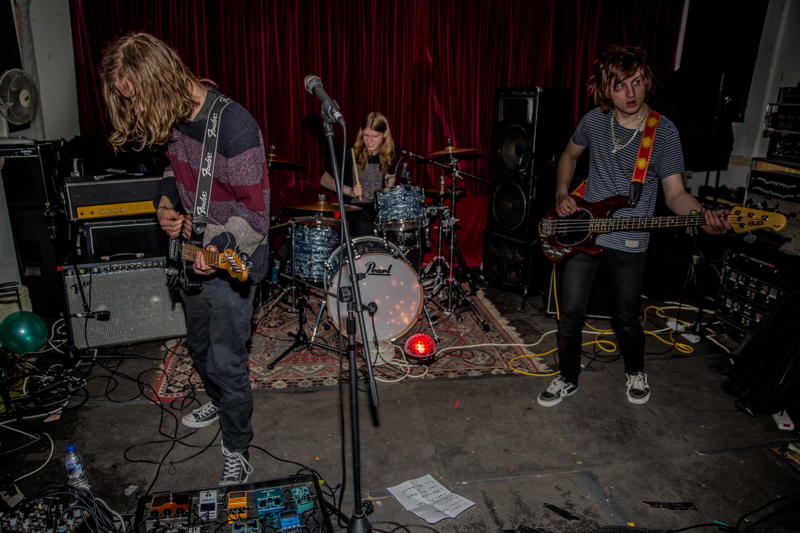 For their second gig of the day, teenage punks, Crosa Rosa, delivered an immense set on the Kagoule-curated stage in the Chameleon Bar. Joe Weatherall (vocals / guitar), Joe Fisher (bass) and Kegan Clark (drums) were a spent force at the end of a 30-minute exhilarating, rollercoaster ride of a set – the highlight being “Little Leper”, just released on 12” vinyl. WOW. Another contender for gig of the day. 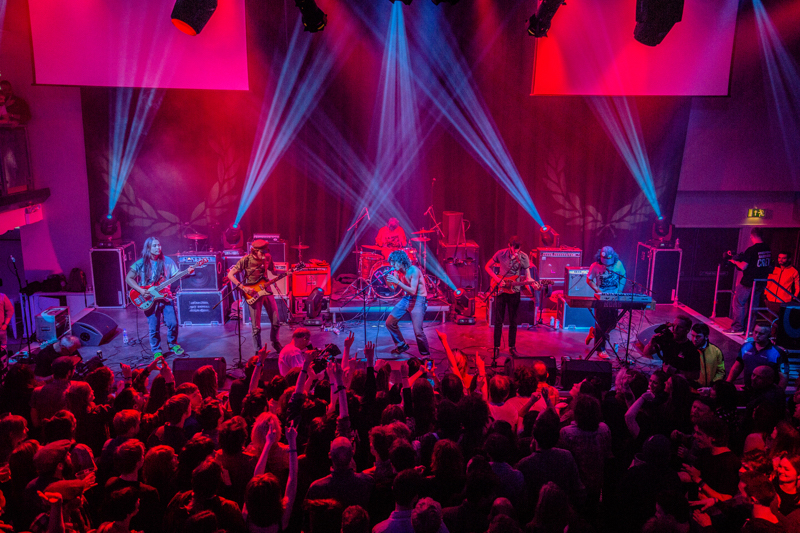 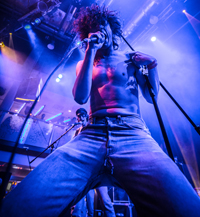 There’s no rest for the wicked – and amongst the wickedest bands around at the moment is the Fat White Family. With more line-ups than a Claudio Ranieri football team, this day’s Fat Whites pulled off one of the day’s most astonishing sets. Frontman Lias Saoudi seems to spend as much time crowdsurfing as on stage – and everyone loved it. The hypnotic “I Am Mark E Smith” with its call to “leave the kettle on” was a masterpiece, as was the brooding, crazy “Auto Neuron” and the brain hemorrhaging “Is It Raining In Your Mouth?”. Emblematically, and unsurprisingly, The Fat Whites finale was “Bomb Disneyland”; Lias Saoudi emerged from his last crowdsurf with jeans around his knees. Without a doubt, GIG OF THE DAY! 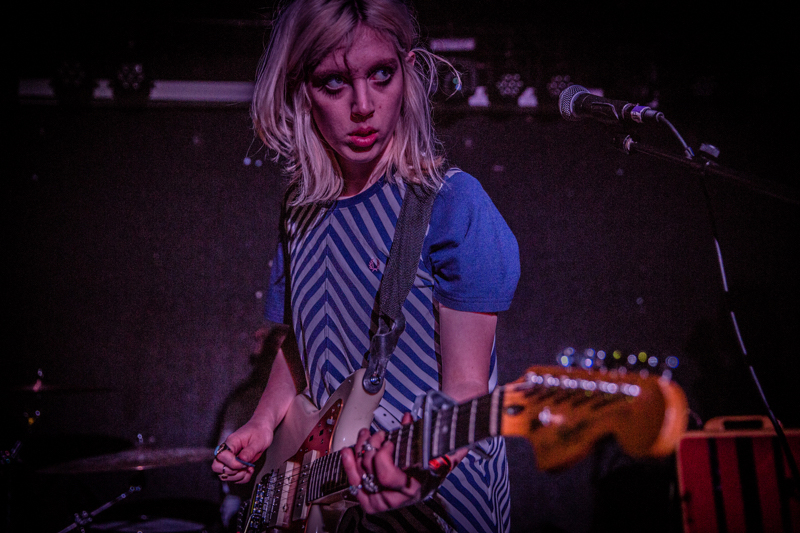 A walk across town, and Brighton-based Black Honey were on at The Bodega. Vocalist Izzy Bee Philips stage performance was enthralling, with standout tracks “Spinning Wheel”, “Bloodlust” and “Teenager”. They’re a tight band, and playing a few festivals this summer. Go see them; they’re great. 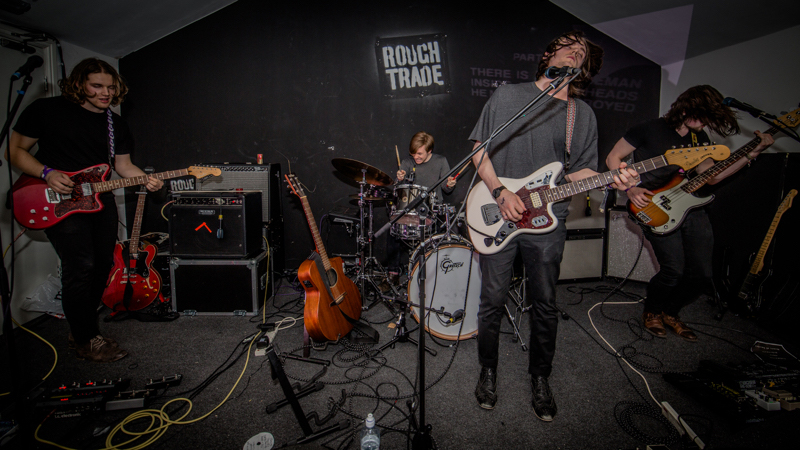 Life got a little dirtier and deeper post-Saint Raymond’s headlining set. Nottingham’s Rough Trade record shop said goodnight with a supreme set from Nottingham’s Field Studies. Playing on a stage in a big field near you very soon (hint, hint), the last few months have seen them transform into one of the most stunning sounds around. Chris Bailey (vocalist / rhythm guitar) demanded attention, with range and depth, and sublime control. Kasper Sandstrom’s guitar riffs, Charlie Howarth’s bass rhythms and Andrew Harrison hard-hitting on drums made it all look effortless. It’s not, I’m sure, but it seemed it. 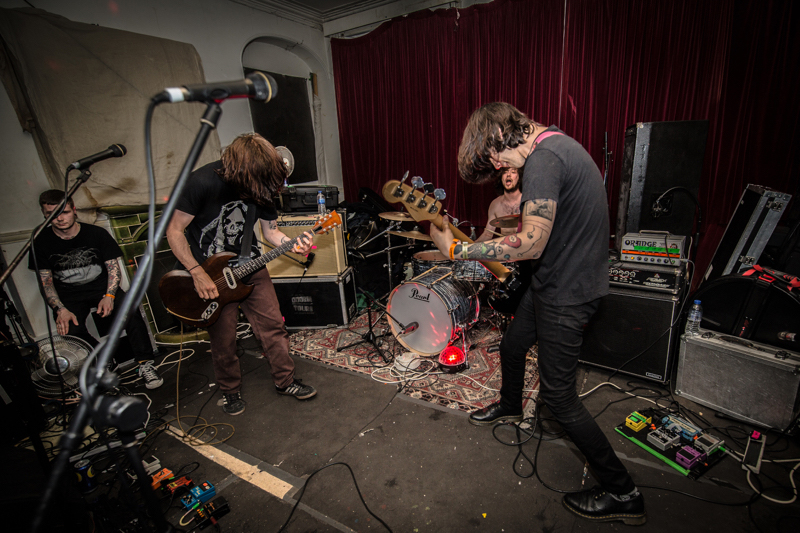 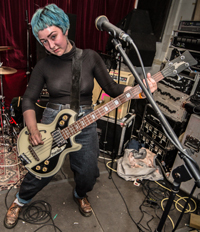 Post-midnight sees QRO completed a 13-hour festival marathon taking in a dozen bands, with two final gigs on the Kagoule-curated stage at The Chameleon Bar. Strictly a one-in / one-out arrangement as the venue was full, rarely had Nottingham seen long queues to get onto a venue past midnight on a Sunday. The penultimate band, in what has been frequently described as the ‘venue of the day’, was Kagoule themselves. Everyone lost it. Lucy on bass yells at Sid to quit his crowdsurfing. Like that was gonna happen. The mosh pit, overflowing, was also in no mood for gentleness. This was like having all your best mates round for a gig in your own front room, with the neighbours away. Indeed, some large Victorian student-house front rooms are probably as big as The Chameleon. Intense. Incredible. Not-so ‘secret headliners’, The Wytches, followed. Somehow, the sound was turned up to eleven or twelve out of ten on the dial, and then it felt like someone’s snapped the dial knob off. Those inside – including Kristian Bell on vocals / guitar, Dan Rumsey on bass and Gianni Honey on drums – were in a frenzied state. Those outside, the ones that ain’t gonna get in, stay – listened anyway. And then it’s all over. The Chameleon has run out of beer, and everything else. It’s time for home.