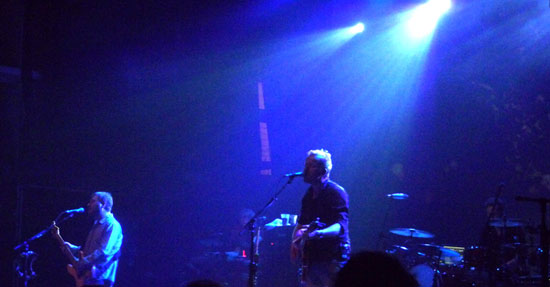 Finishing up their North American tour in support of Kingdom of Rust (QRO review), Doves stopped by House of Blues in Boston on a relatively quiet Sunday.

With a mix of songs that covered all four of their albums, the band breezed through a variety of intensities while backed up by their trademark video on a massive screen.  They opened with Kingdom of Rust opener “Jetstream” with images of airplanes playing behind them, and into “Snowden” off of Some Cities.  From there, they peppered in new tracks like “Winter Hill”, “10:03”, and “The Greatest Denier” while occasionally stopping to express their gratitude to Boston’s fans.

The end of the main set was perhaps where their greatest variety of moods were, starting with the solemn “Ambition”.  “Black & White Town”, featuring the official behind the band, got the ground back into higher spirits before the explosive new track “The Outsiders” took it a step further.  “Caught By The River” sent them off stage in a cloud of dust before they returned for an encore.

The encore consisted of four older tracks, including “Here It Comes”, “The Last Broadcast”, and the finale, “There Goes The Fear”.  On that finisher, supporting-band Wild Light joined Doves on stage for the signature group drumfest during the song’s coda.  After the lights came on, several drumsticks were thrown, and with them, the tour ended on a high note.