<img src="http://www.qromag.com/wp-content/uploads/2009/05/doveskingdomofrust.jpg" alt="Doves : Kingdom of Rust" />A little more seasoned and skeptical, Doves return with their darkest album to date. ... 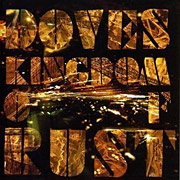 With their signature spacey romps, Doves have always provided a oddly upbeat vibe to their otherwise dramatic rock n’ roll.  On Kingdom of Rust, their fourth album, the group lowers the mood further than ever, with desperately strained melodies and cynical lyrics.

Once again, Doves display great range over the course of the album, but Kingdom of Rust is more teeth-gritting than its free-flowing predecessors.  It kicks off with an electronic nod to their former incarnation, Sub Sub, "Jetstream" that eeriely rides out a metallic dance beat.  Fuzzed-out guitar melodies and driving beats find themselves on songs like "Winter Hill" and "House of Mirrors" – scattered in between smoother, more somber tracks like "Kingdom of Rust" and "10:03" (the latter actually blowing up into an anthemic alt-rock gem).  Such a wide variety of rhythms and energy levels exist throughout the record that Doves come out looking brilliant again.  The alt-funk swagger of "Compulsion" is a perfect setup for the grungy stomp of "House of Mirrors" and the soaring "Lifelines" that close out the album.  Each track on Kingdom of Rust seems to perfectly lead into the next one.

Click here for photos of Doves at Terminal 5 in New York, NY on June 4th, 2009 in the QRO Concert Photo Gallery

On their first offering since 2005, the always-reliable Manchester, England band delivers another stellar blend of modern rock that’s seemingly ahead of its time.  Songs like "The Outsiders" and "The Greatest Denier" and even the album’s title cast shadows all over the mood, and in an age fraught with worldwide despair, Doves capture that sense while cleverly pairing it with a sophisticated soundtrack.