'Take Care' probably won't be remembered as Drake's best album, but as yet another nice addition to his rapidly growing catalogue.... 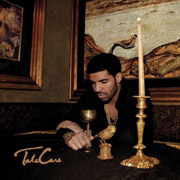 After hearing the first single “Headlines” off Drake’s new album Take Care, expectations for the record went from cautiously optimistic to straight up psyched; will never learn.  As dynamic as the lead single was, the rest of the album is solid and workmanlike, but not spectacular.  ‘Workmanlike’ in that it is finely crafted, and ‘finely crafted’, one means obsessively crafted.  In the aforementioned “Headlines” he raps, “I take my time with all this shit, I still believe in that” and we all still believe it too.  You can never fault any work that Drake puts out for not being meticulously constructed and his brilliant crew of producers on this album deserve a ton of credit.

Noah ‘40’ Shebib, Boi-1da, Just Blaze and The Weeknd especially are on the top of their game throughout the album (and yes, Chantal Kreviazuk too).  A review of R. Kelly’s “Ignition (Remix)” once said that it takes hard work to sound as relaxed as that track does, and the same applies here.  Some of these tracks delve so far into laid back R&B that you forget Drake started as a rapper.  These songs were the best part of Thank Me Later (QRO review) and while there are a couple of great ones here, you can’t help but miss Drake’s signature flow.

The album starts off strong with “Over My Dead Body” and continues its high through the first six songs.  “Headlines”, “Crew Love”, and “Marvin’s Room” are all classic Drake, and the guest spots from The Weeknd and Rihanna are excellent.  But after “Marvin’s Room”, the album gets a little too soft through the middle.  It’s hard to buy a song named “Underground Kings” as coming from the decidedly not-underground Drake, and following it up with a Birdman collaboration is never a good idea for any artist.  From that point on the album stays solid, but doesn’t quite reach the potential of the first six tracks.  Nicki Minaj, Andre 3000, and Lil Wayne all provide decent guest spots (Lil Wayne’s is the best) but nothing sucks you back in to the album.

Take Care probably won’t be remembered as Drake’s best album, but as yet another nice addition to his rapidly growing catalogue.  Don’t let his world-weary lyrics fool you though – at only 25 years old, Drake still hasn’t fully found his stride.