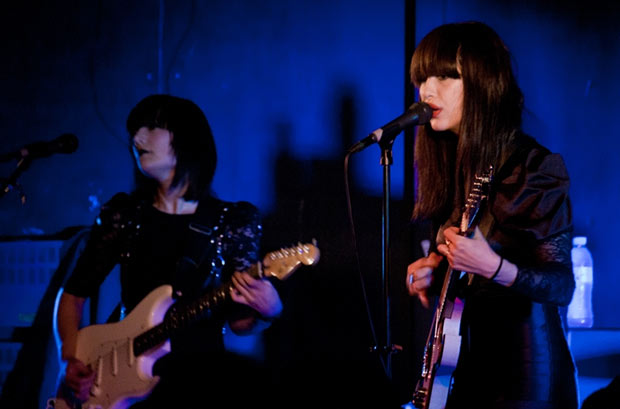 Click here for photos of Dum Dum Girls at CMJ 2012 in New York, NY in the QRO Concert Photo Gallery

Click here for photos of Dum Dum Girls at House of Vans in Brooklyn, NY on July 21st, 2012 in the QRO Concert Photo Gallery

Click here for photos of Dum Dum Girls at Brooklyn Bowl in Brooklyn, NY on December 1st, 2011 in the QRO Concert Photo Gallery

Sub Pop’s Dum Dum Girls are a band as iconic in image as they are in their sound – the ultimate girl gang, decked in leathers and beehives, unwavering and cool enough to erect a veil of ice between them and their admirers.  Armed with songs that resurrected the girl garage bands of old, practically dragging their ghost melodies through dirtier and darker acts such as The Cramps and The Jesus and Mary Chain, it was small wonder the image conscious London crowd flocked to see them in their droves.  Their second release, Only in Dreams (QRO review), hinted at a lighter and more melodic form – undoubtedly due to the inclusion of the full band on the record as opposed to just being the brainchild of frontwoman Dee Dee – and found the band more successful than ever before.

But it was a curious sight on entering the O2 Academy Islington on April 11th.  For a band that usually sells out every show they play in London, only a handful of people were dotted around the venue.  Had the L.A. sirens lost their popularity?

Support came in the form of Novella, an East London-via-Brighton three-piece (swelled to four with the addition of a live drummer) who specialise in My Bloody Valentine-esque grunge tinged shoegaze.  Their lilting and wistful sound places them securely among the Best Coasts and Vivian Girls set…  But while at first it’s easy to dismiss them as a generic, if charming, take on this popular American sound, the strength of their songwriting and sound-play make one sad to think they will be judged by those who came before.  It’s plain to see they have the potential to be even stronger musically than their more famous U.S. counterparts, given time.

Thankfully, by the time Dum Dum Girls took the stage the crowd had swelled significantly into a sea of copycat leather jackets, men and women alike.  The softer element to their second album represented itself in the band’s dress: all decked in white rather than their usual black.  Opening with “Bedroom Eyes”, they enveloped the crowd instantly in those waves of their surfy guitar pop, like kisses fluttering to each individual cheek.

While flashes of their earlier darkness manifested in their versions of “I Will Be” and later, “Bhang Bhang I’m a Burn Out”, the show as a whole was instead a celebration of sweetness and sugar as they ran through the contents of Only In Dreams.  Dee Dee still took command of others, undeniably a fantastic and attention-commanding frontwoman, but it was heartening to see how they had gelled so much as a band – even new bassist Malia slotted in perfectly – and lead guitarist Jules was a genuine talent to behold.

The crowd, while full, were disproportionately quiet and polite, which led to a slight lack of atmosphere.  Perhaps they were too cool to let themselves go, or perhaps they were lost in appreciation.  Either way, it did nothing to dampen Dum Dum Girls’ fervour.  They may have been born out of an appreciation for the old, but tonight’s gig showed that their songwriting accomplishments outweigh anything those 60s garage girls could have achieved.