Billed as a hometown gig, Duran Duran played a couple of intimate shows in Birmingham.... 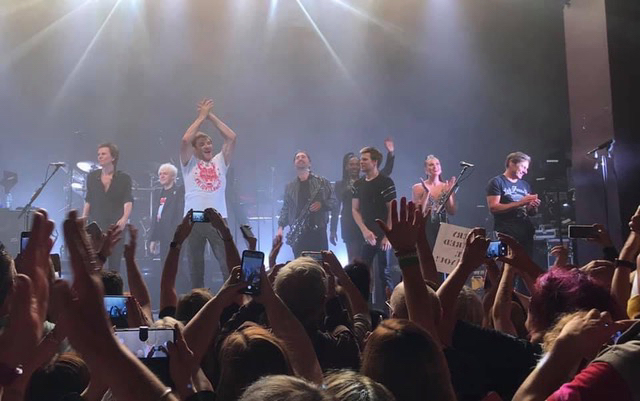 Billed as a hometown gig, Duran Duran played a couple of intimate shows in Birmingham starting on Wednesday, September 15th to a capacity crowd 1,500. The Birmingham O2 Institute sits in a tatty worn-down area of Digbeth a far cry from the exotic sites of some of the bands video locations in the ‘80s and ‘90s, but it was from this bleak landscape a phenomenon was unleased across the globe in a time of ‘yuppies’ and MTV.

Selling out in minutes when the tickets went on sale, fans could be seen queuing outside the venue a good two-and-a-half hours before the doors opened and a further two hours before the band were due to take to the stage.

There was a lot of excitement and anticipation from those waiting outside with several people travelling in from all over the world. One Californian fan said that she had literally flown into Birmingham for 78 hours and would be then heading home.

Arrival later to the venue and hour before showtime and every corner of the compact venue was rammed making it impossible for people to get to the bar as people jostled for a good vantage point. Upstairs was a small stretch-around balcony, with some original features from the building’s inception in 1908.

Up front the relatively small stage was shrouded in electric blue lighting with a haze from the dry ice as the packed venue waited in anticipation with several ongoing late comers trying in vain to try and get closer to the stage.

Finally, a roar went up as Duran Duran confidently strutted on stage with original members Simon Le Bon, Nick Rhodes (with his trademark blond hair and snappy suit), Roger Taylor and John Taylor, who still looked like the ‘80s icon which made them so popular with girls all over the world. This band was hailed at the time as the new Beatles, but this ‘Duranmania’ and it’s alive and well all these years later.

The band were joined on stage by two female backing singers, a sax player and guitarist Dom Brown who had played on Duran Duran’s previous three albums, as well as playing with other artists such as Elton John and Lionel Richie, and he impressed throughout the evening looking every part as cool as the rest of the band.

Duran Duran have a new album Future Past due for release on 22 October and the night started with “Invisible”, a track from the forthcoming album and automatically those present were hooked, with grown women screaming before heading into older classics “The Reflex” and “Notorious” with full audience participation.

Over the next hour and a half, the band played a varied selection of songs from across their career with Simon Le Bon playfully moving around the stage and not taking himself too seriously. In between songs the frontman expressed their gratitude for the career which had seen the band remain as popular as they had been in the early ‘80s.

“Planet Earth” was well received, so much so it was impossible to hear Le Bon due to him being drowned out by 1,500 voices singing every word including the “bop, bop, bops.” Next the Bond classic “View to a Kill” and then back to the debut self-titled album and “Friends of Mine”, which almost became a mosh pit of middle-aged women that at times felt more aggressive than any punk gig.

Other favourites across the evening were the sing along classic “(Reach Up for the) Sunrise” from the 2004 album Astronaut and a great cover of “White Lines” by Grandmaster & Melle Mel before finishing the set with “Girls on Film”.

They returned for an encore with a brief rendition of Lou Reed’s “Perfect Day” before finishing the evening with two of their biggest songs in “Wild Boys” and “Rio”, which catapulted Duran Duran to super stardom.

With three songs played from the forthcoming album during the evening and well received, do not be surprised to see Duran Duran with potentially another #1 album on their hands and further sold-out large arenas once “Planet Earth” opens up again.