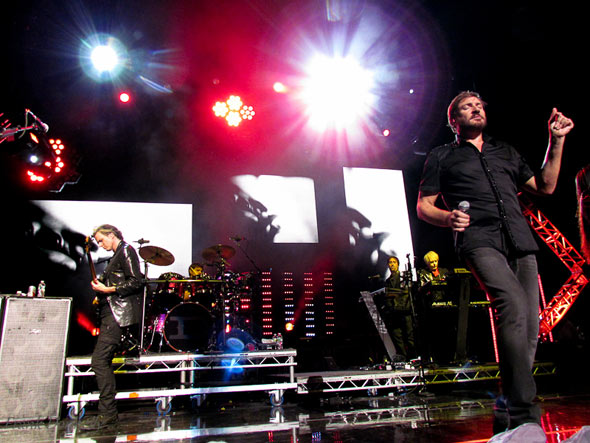 Duran Duran is a phenomenon.  Having been consistently filling venues for well over 30 years and still staying relevant with people who hadn’t been born when they began, they are truly a gem in the music world.  Touring their latest album All You Need Is Now, produced by wunderkind producer Mark Ronson, they made their 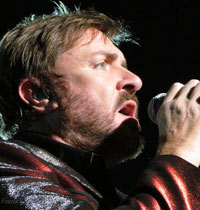 stop on Tuesday, October 11th at Seminoles Hard Rock and Casino (the ill-fated place where Anna Nicole Smith died).  Their stage set was immense and beautifully decked out, including a massive banner that was projected with various visages including the band’s, the album cover for Rio’s face, and even merging female backup vocalist Anna Ross, whose features were blended with that of a Leopard during “Man Who Stole a Leopard”.  It was quite intense and beautifully laid out, and showed that despite the economic climate that has despaired most musicians these days, Duran Duran still holds their opulence.  Throughout the evening audience members were directed to send tweets with the tag #duranlive in order to see them on screens projected behind the band. 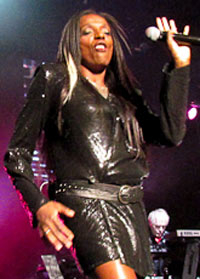 Opening the sadly not long enough set was “Before the Rain”, a dark track that built up tension before transitioning into “Planet Earth”.  Simon had previously been having vocal problems leading to a cancellation of European tour dates, but his voice was strong this night, hitting notes that he had hit when he was in his twenties.  “Planet Earth” was a crowd favorite, which had people from many stages of life, from children to forty-year-olds, up 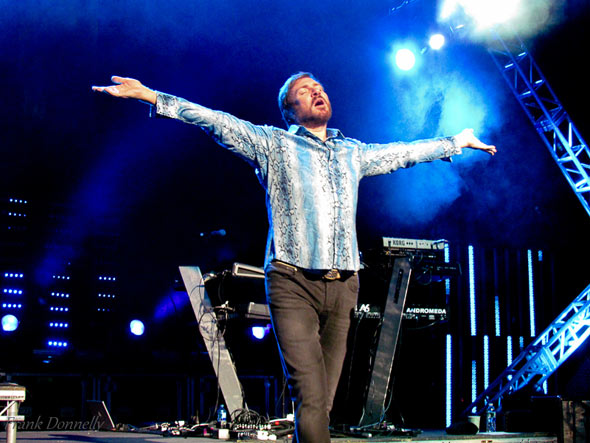 dancing in their seats.  “View To a Kill” was next with some Bond-type visuals; women dancing in fire forms backlit behind them on the screen.  This was followed by their latest album’s title track, “All You Need Is Now”.  Lebon’s moves were fluent and enthused as he danced along the expanse of the large stage, sending people into frenzy as he approached.  Lending his hand until nearly touching that of a fans and pulling away left people going nuts.  “Blame the Machines” was next, then taking it back to the ‘90s with “Come Undone”.  Backup vocalist Anna Ross took the front rapping Ana Matronic’s (of the Scissor Sisters) part for “Safe (In the Heat of the Moment)”, a disco-y track track that translated well to the venue.  Lebon called for crowd participation during “Reflex”, and then on to the epic “Man Who Stole a Leopard”, which is a love song to a big cat. 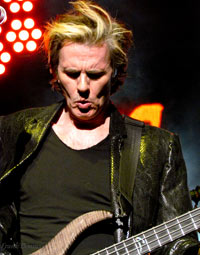 The evening’s big blatant lie came from the next song which was introduced by Lebon, stating that it was written for men like him who have trouble talking to the ladies.  “Girl Panic” is catchy, lively, and totally not true to life.  John Taylor introduced a return to the early eighties with “Careless Memories” and a small instrumental tweet session.  Back to the present with “Leave a Light On”, which was a new single that Lebon asked the audience to request from their radio stations 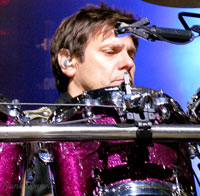 in order to keep his mother from disappointment.  “Ordinary World” with a massive swaying crowd and ended the slow portion of the show.  “Notorious” had an extended jam session where the band was introduced.  Nick Rhodes so stoic throughout the show smiled and drummer Roger Taylor’s after-party DJ gig was announced again.  Live percussionist Chastity Ashley had been on the bongos and synth drum pads and dancing all night, and the sax player & Anna Ross were also introduced.  “Hungry Like the Wolf” and “Sunrise” finished the set, leaving a short moment for the crowd to demand an encore.  The Hard Rock being a venue that runs on the clock pretty strictly it wasn’t a long wait before the show ending with “Wild Boys” and “Rio”, which left the audience going crazy.  It was a beautiful show executed brilliantly and gives hope that Duran Duran will not only be back for another tour but as many as they like.  These boys who are now men still have it.