<img src="http://www.qromag.com/wp-content/uploads/2011/12/durandurandec16.jpg" alt="Duran Duran : Live" />So how can a bunch of mostly Brummy lads, in their circa 50s, dressed in sequins, velvet, and ruffles still come over... 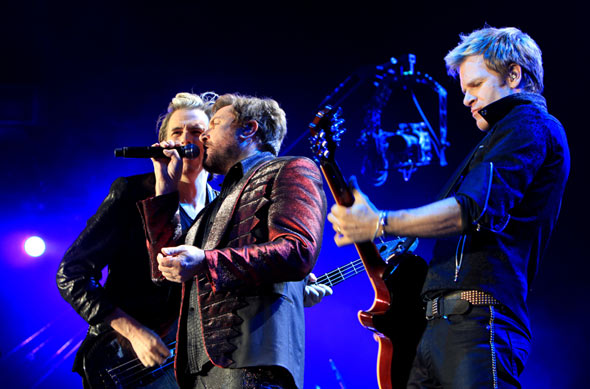 So how can a bunch of mostly Brummy lads, in their circa 50s, dressed in sequins, velvet, and ruffles still come over as cool?  The answer is, not sure how, but they did!

From the moment Duran Duran entered the stage at Manchester’s M.E.N. Arena on Friday, December 16th, the crowd of mostly over-40s (but looking and acting much younger) were taken back years.  Women’s hands were clasped to their mouths in anticipation; as an audience they had waited with excitement by doing a Mexican wave, straight out of the ‘80s.

The stage was in black, with a wisp of white smoke, and then the band bounded on with arms in the air, obviously very happy to be exactly where they were.

Simon Le Bon, dressed in sequin trousers (that only a real man could carry off…) and tailored crimson and black military jacket, sported a full beard, which, let’s face it, unless you are very sexy is difficult to make look that good.  He confidently took the Arena full to the rafters and made it feel like he was singing every song to each individual.

It’s hard to remember what videos used to be like before “Wild Boys” and “Hungry Like a Wolf”, but the videos that were shown as background art during the show weren’t letting anyone down today. 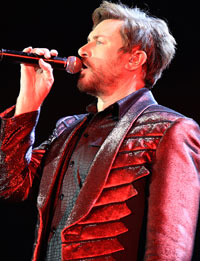 Le Bon was note perfect throughout the evening.  Visual treats, winged phoenix “Tales of the Unexpected” dancing-fire-women made a red and gold backdrop for “A View To a Kill”.

John Taylor, a true legend, looked, acted, and played like his passion was being fulfilled.  Every note that came from his guitar was backed up with emotion, and the room went along with him.
During “Come Undone”, someone near the front of the stage blew Le Bon a kiss, which, with his arm outstretched he caught and then put his hand to his mouth.  To the delight of the ladies who screamed, “We love you Simon!” 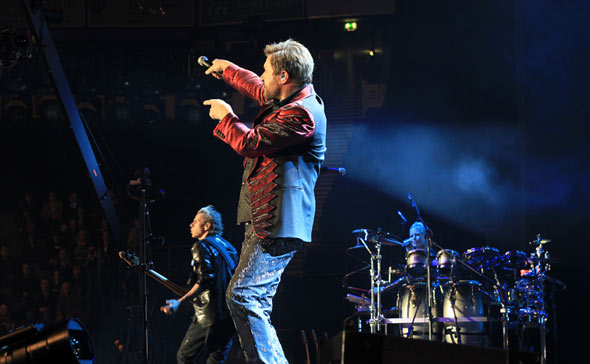 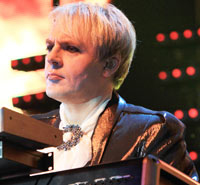 Nick Rhodes stood behind his synth in a full black suit with white ruffled necked shirt held down by an enormous diamante brooch, his hair still the trademark white and the ‘guy liner’ just made him appear to have been suspended in time for the past 30 years.

One of the highlights was “The Reflex”, when Le Bon asked for a “Mancunian bloke” to help start the singing off, and “Dean” was ushered to the front where Le Bon kindly offered to hold his pint (and took a drink, singing the “Da na na na” over and over again in the mic that was then lopped.  The rest of the audience then joined in.

When “The Man Who Stole a Leopard” was sung, the video with the newsreader Nina Hossain presenting the news report on the true story, showed how innovative the song was.  “Safe (In the Heart of the Movement)” saw the fantastic Anna Ross come to life, the control of the room was inspiring, from the getting everyone to clap, to go with the rap that starts the song, the glitter balls on the big screens gave a suddenly different feel to what had happened before – BUT it worked, it fitted, it was another string to the bow.

During “Girl Panic”, visuals from the music video staring Yasmin Le Bon, Cindy Crawford, Naomi Campbell, Eva Herzigova, and Helena Christensen played behind in synchronization with Le Bon’s singing.  The girls took on the roles of singer Le Bon, drummer Roger Taylor, bassist John Taylor and keyboard player Nick Rhodes in the video, which is a half-parody/half homage to the music and fashion industry.  Taylor did a ‘drum off’ that echoed round the room and it took the clapping, stamping fans with them.

Duran Duran have eventually been dragged into the social networking media and Le Bon added he was a twitter addict, “If you’re feeling the itch, message #Duranlive,” and they did, messages from “Simon, my mum wants you to be my new Daddy,” “I am 11 years old and this is my first gig,” to “John, I love you as much now as I did 30 years ago!”

There were as many men as women in the crowd, and everyone danced.  Watching them with scarves outstretched and retro padded shoulder jackets you could’ve been back in the ‘80s, if it wasn’t for that people were recording their memories and uploading them to Facebook/Twitter as the evening went on.

During “Is There Something I Should Know”, the men and women were singing the words as if they were Le Bon, mirroring his mannerisms and feeling every word.  Singing “White Lines” and “Relax” were other ways of taking us back to the ‘80s, when music was such an important way of getting the country united with one voice.  Not wishing to get political (but music and politics are firm friends) but we all need that coming together under one roof, with a similar focus every now and again.

Le Bon summed up the whole night by saying, “I just fucking love music, here we all are on the same side!” 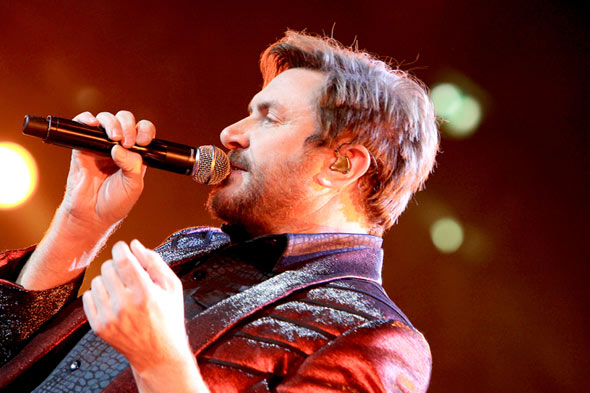