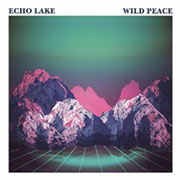 Wild Peace is Beach House (QRO live review) and Slowdive’s illegitimate (but enthusiastically created) lovechild.  Combining the former’s dreamy wistfulness and the graceful shoegaze defined by the latter, your enjoyment of Echo Lake’s debut long-player will be predicated on overcoming any prejudices you have about band’s repurposing others’ sounds.  This process is made easier by the uncanny accuracy of the group’s simulacrum, as it’s difficult to dwell on their obvious influences when they sound this good.

A gossamer haze envelops each track, producing an otherworldly atmosphere that’s just substantial enough to prevent them floating away into the ether.  This is achieved through the combination of vocalist Linda Jarvis’ particular style, which is characterized by a delicacy and ethereality that sits perfectly atop the glittery drone of Thom Hill’s guitar work.  Complementing this, the band’s rhythmic components are content to underpin and not to overwhelm.

An unfortunate side effect of the sweet sonic miasma the group has created is that these songs can tend to blend in with one another.  Though this ensures coherence, it was a wise decision to cap the album at ten tracks.  Any longer and the listener’s patience and capacity to differentiate between one vaporous number and another (and another) would be sorely tested.

This is not to say that certain tracks don’t distinguish themselves.  Opener "Further Down" has a special poignancy, "Even the Blind" almost becomes anthemistic and the poppy "Another Day" will no doubt win over a few converts.  It’s evident though that for all their beauty, these tracks will probably struggle to hold your attention beyond the ‘album honeymoon period’ (scientifically quantified at two weeks).  The band will have to be content then with having made a good impression rather than a deep one.