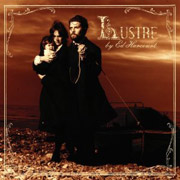 While Great Britain’s Ed Harcourt has produced enough material successfully enough to have his own best-of release (2007’s Until Tomorrow Then), the singer/songwriter hasn’t hit it big in the U.S. of A. – the two-year delay between the release of his last studio album, 2006’s/2008’s The Beautiful Lie (QRO review), didn’t help.  Lustre at least is coming out at the same time on both sides of the pond, but after some decent beginnings, the record sinks into Broadway overwrought in the back half.

Like it seems every other record these days, Lustre starts with its title track that effectively introduces the record, in this case sweet & brightening up-with-life pop that gets bigger & bigger.  While "Lustre" and the bigger-all-the-way-through following "Haywired" don’t truly impress, they lead to better pieces that start to.  "Church of No Religion" is more focused and effective, even when it gets big, and if the subsequent "Heart of a Wolf" & "Do As I Say Not As I Do" are cheesy like late seventies/early eighties Billy Joel or Randy Newman, they’re also catchy in the Joel-Newman way.

Unfortunately, from there Lustre starts to sink.  "Killed By the Morning Sun" is some overwrought heart-sad softness, jarringly inserted between the upbeat "Wolf" & "Do" before and "Lachrymosity" & "A Secret Society" after – and the latter two can’t match the former two, feeling like Broadway numbers Billy Joel or Randy Newman would do these days.  And then, for the final three on Lustre, Harcourt dives completely into a piano emo-croon on "When the Lost Don’t Want To Be Found", "So I’ve Been Told", and "Fears of a Father" – even Billy Joel (or Keane – QRO album review) would think these overdone…

Maybe there’s a reason Ed Harcourt hasn’t broken through in America, and it’s not because of his timing.  On Lustre, after some early promise, Harcourt gets overdone in seemingly every direction, like Robin Williams carrying his comedic approach to Broadway (wait – think that would make Nathan Lane…).  Grandeur has to have something to compare to, and something to back it up, not just shine.

MP3 Stream: "Church of No Religion"