<img src="http://www.qromag.com/wp-content/uploads/2010/01/editorsinthislightandon.jpg" alt=" " />Editors put synths in center stage, and while rewarding after a fashion, it ain't the Anglo New Wave you were looking for. ... 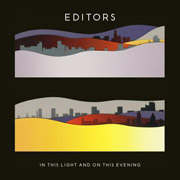 There was a time, earlier this century, where the indie world seemed saturated by Anglo New Wave revival acts, and at the forefront were New York’s Interpol & Birmingham’s (U.K.) Editors.  While Interpol graduated to major label status, and saw their quality decline (most recently with 2007’s Our Love To Admire – QRO review), their English brethren held back a bit, staying with their independent label and sticking roughly to their 80’s New Wave style in that same year’s An End Has a Start (QRO review); but by that point, they were almost outliers, as indie-rock had moved in a different direction.  However, all things come back around, and the dark Anglo New Wave is back in bands like U.K.’s White Lies (QRO spotlight on) & Melbourne-by-way-of-New York Morning After Girls (QRO spotlight on).  But now it’s the Editors who have shifted, trading the guitar-base of their prior work for a decidedly synth-ier In This Light and On This Evening.  Disappointing at first, then rewarding after a fashion, but it’s not the Editors you loved.

The overriding element on This Light is the synthesizer, which has replaced guitar at the core of the songs.  Unfortunately, it presents two problems: for one, a synth note will sound the same, every time you play it, and that can leave otherwise interesting pieces such as the titular opener a little one note.  But more difficult is that synths, with their single, sustained notes, can be overpowering if placed in the center, the guitars overwhelmed, not complimenting, like synths do when guitars are the main actors.  Along with singer/guitarist/pianist Tom Smith’s sometimes over-amped voice, the sound can be both too much & too little – too much in volume for the synths & voice, and too little in variety for the two, like on first single “Papillon”.

However, it isn’t an awful sound, and Editors later learn to tone it down a bit.  The restraint on “Eat Raw Meat = Blood Drool” makes a kind of New Wave-tronica, and when Editors start small, then build, such as with “The Boxer” or upcoming single “You Don’t Know Love”, the bigger parts are better for it.  The back half of This Light is clearly finer when the synths are toned down: the slow, high procession of “The Big Exit” improves when the repeated chorus of “They took what once was ours” comes in near the end, while the nice proceeding growth of “Like Treasure” is marred by some overdone synthesizers.  Closer “Walk the Fleet Road” brings orchestral, not synthetic, grandeur & emotion to an empty room.

It’s natural that the Editors wanted to shift their sound and do things differently, and focusing on synths was a natural move.  But the results don’t feel natural, and even as the kinks get worked on, In This Light and On This Evening still ain’t what you were looking for from the Editors.