<img src="https://www.qromag.com/wp-content/uploads/2010/09/edwardsharpesep2.jpg" alt=" " />Edward Sharpe and the Magnetic Zeroes decided to play in the city most appropriate for their somewhat hipster style: Portland, Oregon. ... 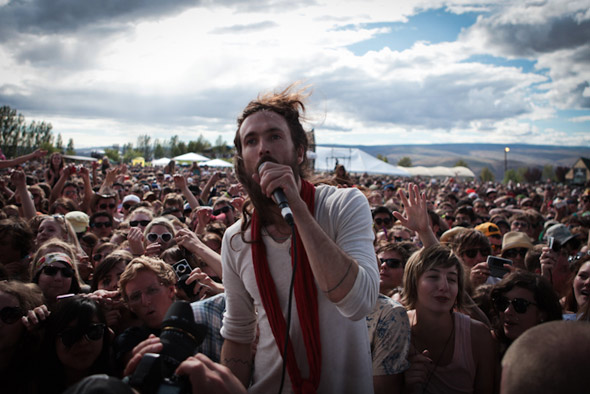 Click here for photos of Edward Sharpe & The Magnetic Zeros at 2010 Sasquatch! Music Festival in George, WA in the QRO Concert Photo Gallery

Thursday, September 2nd was the first of a two-night special event at the Wonder Ballroom that Edward Sharpe and the Magnetic Zeroes decided to play in the city most appropriate for their somewhat hipster style: Portland, Oregon.  It was easy to see what kind of show it was going to be by the lengthy line of people standing in front of the venue forty minutes before the doors opened.  That being said, the expectations were high for this needless to say, sold out show.

After an hour or so wait following the opening act, Ed and company finally made their way onto the stage.  They covered just about every song off of their self-titled album, including the first song on the record, "40 Day Dream", which also happened to be the kick off song of their set list.  Throughout the show, it became subtly obvious that playing these same songs had started to burn the band out; and who could blame them, as they have most likely played them hundreds of times.  This was most evident when one of their most energetic as well as famous songs (probably the most famous song in their repertoire), "Home", was played in a seemingly lackluster manor compared to other songs in their set.

However, this does not mean by any means that the entire performance was lackluster, in fact, quite the opposite.  Yes, they are probably sick of playing some of the songs, but that didn’t stop them from playing a fantastically energetic show for all of their Portland fans.  The focus of this energy was ‘Ed’ himself, singer Alex Ebert.  Ebert’s antics included crazy dancing, jumping into the audience, and taking fans’ hats and wearing them on stage.  All of which made the crazed fans even more excited.

The final song was the highlight of the show, as Ebert decided to bring it down a notch and play a very intimate version of their song "Brother".  Most likely against the venue’s wishes, Ebert invited a large portion of the crowd onto the stage to play this song with him.  After dimming the lights and instructing the whole of the ballroom to take a seat, he played one of the most moving live songs this writer has ever seen.  After finishing the show, Ebert even came down into the audience to talk to and take pictures with every fan who was eager to meet him.

Edward Sharpe and the Magnetic Zeroes is definitely one of the most interesting as well as successful bands playing in the indie scene today, and rightfully so.  Catchy well-written songs coupled with an intriguing style and a captivating live performance to back them up bodes well for the future of this band.  To see where they’re headed and the music they will write next will be an entertaining proceeding to say the least.