There is much hope in The Cautionary Tales of Mark Oliver Everett.... 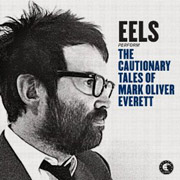 Mark Oliver Everett, a.k.a. the main man behind Eels, already had enough of a career to put out a greatest hits (QRO review) and extras (QRO review) collections back in 2008, not to mention around then also a live album, an autobiography, and even a documentary about his father, ‘Many Worlds’ theorem creator Hugh Everett III. After all of that, he fully eschewed his ‘cooler’ early days and became the stripped alt-folk singer-songwriter his beard (QRO photos) always indicated with records like Hombre Lobo (QRO review), the brighter Tomorrow Morning (QRO review), darker End Times (QRO review), and most recently last year’s Wonderful, Glorious (QRO review). For The Cautionary Tales of Mark Oliver Everett, the man (once) called E has recalled his brighter Morning, but a largely more inspired one.

Click here for photos of Eels at Apollo Theater in New York, NY on June 1st, 2014 in the QRO Concert Photo Gallery

From the first notes of instrumental piano opener “Where I’m At”, Tales feels like the sunshine after the storm. It’s mostly reduced to stripped, intimate Everett, such as the subsequent “Parallels”, but occasionally grows into strings and more (akin to his live album, Eels with Strings: Live From Town Hall), like in the following “Lockdown Hurricane”. It could have been heavy and one-note in other, less skilled hands, but Everett has been doing this (and other things) for long enough to know how to handle it. There’s the weary “Agatha Chang”, loss-laden “A Swallow In the Sun”, and great sweet strum “Where I’m From” to round out the first half of the record, though Tales does slip a bit after that – “Series of Misunderstandings” is a twinkle harmony underdone, likewise with the old man “Gentlemen’s Choice”.

There is a moment of real darkness in “Dead Reckoning”, yet one doesn’t feel the need for relief from Everett’s brighter morning, which ends very well in “Answers”, “Mistakes of My Youth”, and “Where I’m Going”. There is much hope in The Cautionary Tales of Mark Oliver Everett.