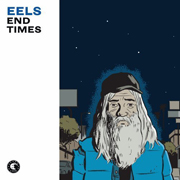 After 2005’s double-disc Blinking Lights and Other Revelations, Mark Oliver Everett – better known as Eels – put out a lot of stuff that wasn’t another studio album, from a greatest hits collection (Meet The Eels: Essential Eels Vol. 1, 1996-2006 – QRO review) & a b-sides compilation (Useless Trinkets: B-Sides, Soundtracks, Rarities and Unreleased, 1996-2006 – QRO review) to an autobiography (Things The Grandchildren Should Know) & even a documentary about his father, Hugh Everett III, originator of the ‘multiple worlds’ theory of quantum physics (Parallel Worlds, Parallel Lives).  So when he came back to the studio releases last year with Hombre Lobo (QRO review), it naturally came as a bit of a letdown that he his sound hadn’t changed after all of that, despite it being such a good sound already.  But the prolific Man (once) Called E has taken only half a year to follow that up with End Times, which builds & takes him further.

The main reason for the quick turnaround was Everett’s decision to record much of End Times on a four-track.  In addition to making production much faster, the lo-fi recording saw Everett go lower-fi in style – but not (yet) another garage-rock act, despite his previous garage-buzz ways, rather into stripped, soul-bearing alt-folk with grit.  This was certainly intentional, as Everett also chose downbeat material, mostly about aging and divorce, as well as the ‘end of the world’ overarching theme.  But that’s always been some of Everett’s best work, and he keeps it up on End Times tracks like “I Need a Mother” and “Little Bird”.  There are also a few more up-blues pieces, such as the smiling wry honky-tonk “Paradise Blues” and road-stomp “Gone Man”, but the sad, stripped side of life is definitely paramount.

At fourteen tracks (though two of those are near-minute recordings – Everett talking about seeing a tree over a forest in “Apple Trees”, and of the rain outside on “High and Lonesome”), all of the stripped, sad work can run together a bit, but it still stands out from the million-and-one alt-folk singer/songwriters out there.  Eels had needed a double-disc to get the up- & downbeat visions through on Blinking Lights; End Times is just the sad times, but done better than ever.