<img src="http://www.qromag.com/wp-content/uploads/2009/06/eelshombrelobo.jpg" alt=" " />After all of his other exploits, Mark Oliver Everett still stays close to home on his latest Eels release, <i>Hombre Lobo</i>. ... 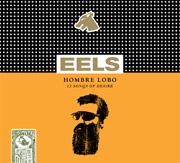 It’s been a long time since Mark Oliver Everett, better known as Eels, has released a ‘regular album’.  In the last few years, he’s put out a greatest hits collection (Meet The Eels: Essential Eels Vol. 1, 1996-2006 – QRO review), a b-sides compilation (Useless Trinkets: B-Sides, Soundtracks, Rarities and Unreleased, 1996-2006 – QRO review), a live album (Eels With Strings: Live at Town Hall – QRO venue review), an autobiography (Things The Grandchildren Should Know), worked on numerous soundtracks (from Knocked Up to all three Shrek movies), and even made a documentary about his father, Hugh Everett III, originator of the ‘multiple worlds’ theory of quantum physics (Parallel Worlds, Parallel Lives).  And his last studio record was 2005’s double-disc Blinking Lights and Other Revelations.  So what is Hombre Lobo, his first regular-length studio record in years?  Fairly following in the sad-but-bright & garage-buzz nature he’s had during all of those excursions.

Hombre Lobo can be divided between those two sides of Eels.  On tracks like “That Look You Give That Guy”, “In My Dreams”, “The Longing”, “My Timing Is Off”, and “All the Beautiful Things”, Everett brings some sad, restrained beauty that is underpinned by brightness, sort of a ‘sunshine after the rain’.  Warm and enjoyable, it can veer a little too closely to his kid’s movie work, like “My Beautiful Monster”.  And while he does split the tracks up for the most part, it’s hard not to feel they all sound rather similar.

The other half of Hombre is where Everett goes for the garage-rock.  He employs the lo-fi buzz-fuzz better than most of those who are embracing it these days, marrying it to some flat-out fun rock ‘n’ roll on such songs as “Prizefighter”, “Lilac Breeze”, “Tremendous Dynamite”, and “What’s a Fella Gotta Do”.  He also manages to vary those tracks up more than on the other half, from the honky-tonk of “Prizefighter” to the press of “Lilac”, or from the dirty loudness of “Dynamite” to the fifties/sixties road-garage catch of “Fella”.

There are two places where Everett steps out of this dichotomy, and they are the two best tracks on Hombre Lobo.  In middle piece “Fresh Blood”, Everett revives some of that restrained procession he first employed way back when with “Susan’s House” (his first hit), but with a garage-road haunt and old-timey relax.  Meanwhile, the penultimate “Beginner’s Luck” successfully mixes Everett’s sad sun & catchy garage.

Yet Hombre Lobo ends on the sad, growing restraint of “Ordinary Man”.  As Eels, Mark Oliver Everett has definitely mastered his twin styles, but it’s hard to feel that he’s grown that much since Blinking Lights, despite all the other projects in between.  And you know he can do it.  Hombre Lobo is the expected nice addition to his discography, but not the unexpectedly, maybe hoped-for step past that past.