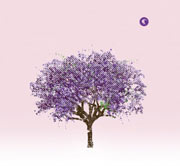 Solo artists have to work doubly hard at forging their own voice, since it really is ‘their own voice’ – no working with others to combine into something new, and their own individuality is wrapped up in their sound.  However, lots of indie-artists have been able to do it, such as the literate John Darnielle (i.e., The Mountain Goats) or the uniquely orchestral Owen Pallett (formerly Final Fantasy – QRO live review of them).  Mark Oliver Everett, a.k.a. Eels, has been pulling it off for almost twenty years now, with a close-up, blues-ish voice, and a somewhat wry, somewhat monotone that just screams, ‘This guy’s got serious facial hair.’  On Tomorrow Morning, Everett displays a brighter attitude, though could use more variance.

After putting out a variety of non-studio albums, from greatest hits (QRO review) & b-sides (QRO review) collections to an autobiography, Everett returned to the ‘regular record’ game with a pseudo-trio of studio albums in the last two years.  2009’s Hombre Lobo (QRO review) wasn’t as inspired as his prior, non-studio work, but this year’s End Times (QRO review) delivered.  Tomorrow Morning stands somewhere in the middle, with some killer tracks, and some run-of-the-mill Eels, held together by a brighter outlook from Everett.

Best pieces include the staccato-ish rhymes that Everett’s employed since breaking through with “Susan’s House” in the nineties, albeit rougher and happier on “Baby Loves Me”, “Spectacular Girl” and “The Man”.  There’s also a really engaging “Looking Up”, where Everett, son of ‘many worlds theory’ quantum physicist Hugh Everett III (a documentary about his late father was another of Mark’s non-studio works), goes into almost a ‘gospel revival mode’.  However, there are a few too many ‘just bright’ tracks to Tomorrow Morning, often running together, save for the sometimes overwrought strings to “I’m a Hummingbird”, “The Morning”, or “What I Have to Offer”.  The track order on the fourteen-song record didn’t help, either, pairing similar-sounding pieces back-to-back, whether “Hummingbird”/”Morning” or “Baby”/”Girl”.

After all of the excursions, Hombre Lobo seemed a bit of a disappointment, if only because it seemed like Mark Oliver Everett was returning to earth.  However, it now is clear that he did take away the ‘conceptual concept’, if you will, from the time outside the studio, envisioning his voice as something more than just a voice.  And Tomorrow Morning finds the bright finish to this new endeavor.

Dinowalrus – “Phone Home From the Edge”