Eight and a Half

<img src="http://www.qromag.com/wp-content/uploads/2012/02/eightandahalffeb23.jpg" alt="Eight and a Half : Live" />Newest Canadian team-up Eight and a Half played their second ever show. ... 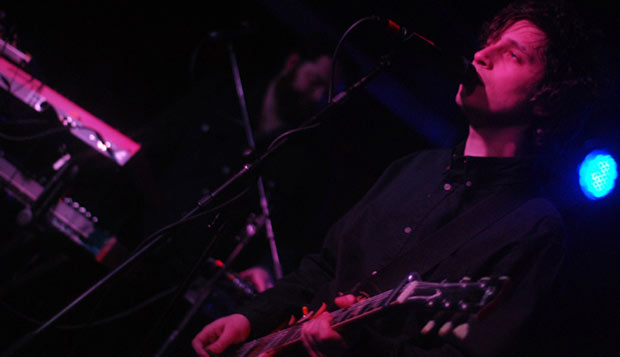 Broken Social Scene’s (QRO spotlight on) hiatus starting last fall (after one more tour with TV On the Radio – QRO review of NYC stop) wasn’t unexpected, given how often the collective takes breaks that allow its various members to pursue other projects (such as Andrew Whiteman’s Apostle of Hustle – QRO spotlight on – or Charles Spearin’s current duty opening for & serving in the band for Feist – QRO review of NYC stop).  The Stills’ (QRO spotlight on) break-up last year did come as a shock, coming after guitarist Greg Paquet returned & a tour with Kings of Leon (QRO photos from St. Louis stop).  But BSS drummer Justin Peroff, Stills singer/guitarist/drummer Dave Hamelin (QRO interview when with The Stills), and both groups’ multi-instrumentalist Liam O’Neil have combined to make Eight and a Half, and played their second-ever show at New York’s Mercury Lounge on Thursday, February 23rd. 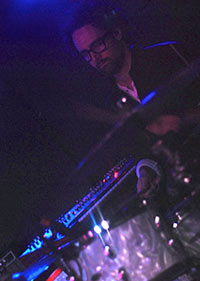 Whereas both Toronto’s BSS and Montreal’s Stills traffic(ked) in killer indie-rock, Eight and a Half takes the expansive element and combines it with strong, near-indietronic beats.  The rhythm element shouldn’t come as too much of a surprise, considering the trio is made up of BSS’ drummer, Stills’ studio drummer, and Stills’ keyboardist, and perhaps not the expanse, either, given Broken Social Scene’s atmospheric leanings.  Still, Eight and a Half have produced something definitely their own on their self-titled debut record, out April 10th.

The set list (QRO photo) at Mercury Lounge naturally drew only from the one-and-only record, playing every song but instrumental closer "My Forevers", though not in the same order as on record (but did start with Eight and a Half‘s instrumental opener, "When I Was Twenty-Nine").  The expanse was more resigned and somber at the start with (after "Twenty-Nine") "Wait Up" and "Took a Train To India", before hitting up the record’s strongest 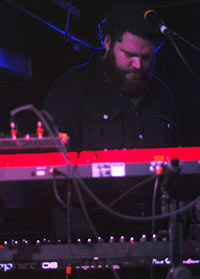 pieces, "Go Ego" (dedicated to a friend’s mother, who just moved away) and single "Scissors".  Eight and a Half got to their most active with the following "Two Points", after which Hamelin noted that he’d asked Mercury to turn off the A.C., but then closed back in the atmosphere with "a song about being jetlagged and on prescription pills," "Walked Into Diazepene", and "Oh, My Head". 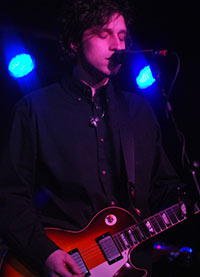 The set was likely a bit of a nerve-wracking one for the band, what with it being their second show ever (when this was mentioned to Peroff before they played, he jokingly responded, "And thanks for reminding me of that…"), and being an industry showcase by label Arts & Crafts (Mercury Lounge is often used for that – QRO venue review).  The lights seemed as low as the A.C. – and having two of your three members behind equipment doesn’t help with stage presence, either.  Hamelin even remarked on the quietness of the crowd, though said that was good, and that was true – the low lights and quiet crowd let the atmospherics of Eight and a Half wash over.