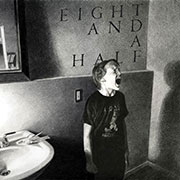 Social democracy works better in Canada, and not just in politics – it is also has a seriously high rate of side-project pair-ups & super-groups.  Toronto’s biggest, the one-and-only Broken Social Scene (QRO spotlight on), began as something of an ad hoc super-group around Kevin Drew & Brendan Canning (QRO interview), and its various other members have done a wide variety of other musical projects, from the solo work of guitarist Andrew Whiteman (QRO interview) as Apostle of Hustle (QRO spotlight on) to multi-instrumentalist Charles Spearin (QRO interview) in post-rock outfit Do Make Say Think (plus his fascinating Happiness Project – QRO review).  Now drummer Justin Peroff teams up with multi-instrumentalist Liam O’Neil & singer/guitarist Dave Hamelin (QRO interview) of O’Neil’s other band, Montreal’s late & lamented Stills (QRO spotlight on), for the expansive of Eight and a Half.

Click here for QRO’s review of EIght and a Half at Mercury Lounge in New York, NY on February 23rd, 2012

Unlike the indie-rock stylings of BSS & The Stills, Eight and a Half is a much more beats-oriented indietronica, with Hamelin’s atmospherics above O’Neil & Peroff’s rhythms.  From the airy intro "When I Was Twenty Nine" to the fuzzy close "My Forevers", Eight and a Half washes over the listener, yet to far more emotional effect than indie-wash usually delivers.  Second track & debut single "Scissors" has an ultra-sustaining loss, while the loss to the following "Go Ego" also nicely brightens – in addition to everything else, Eight and a Half know how to uplift as well as downcast.

The rest of Eight and a Half after "Ego" might not be quite as good, but the record never fails to be quite good, including the resigned "Wait Up" and pressing "Two Points".  We all seriously miss The Stills, and Broken Social Scene better end their latest hiatus at some point, but Eight and a Half is another strong collaboration from our friendly neighbors to the north.