Elbow – The Best Of

One of Britain’s finest bands of the last couple of decades, Elbow, offer their first retrospective collection.... 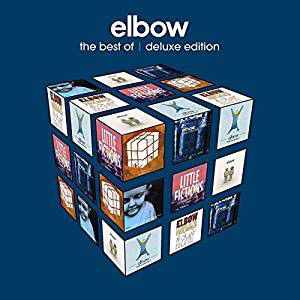 One of Britain’s finest bands of the last couple of decades, Elbow, offer their first retrospective collection following their sixth album Little Fictions (QRO review) bringing them continued success in 2017.

Elbow, who started out as childhood friends in Bury, Lancashire and have been in bands together since 1990 play theatres and clubs in the U.S., have a secret double-life as arena and festival headliners in their native U.K., Europe and Australia.

Click here for photos of Elbow at Terminal 5 in New York, NY on November 2nd, 2017 in the QRO Concert Photo Gallery

Click here for photos of Elbow at Paradise in Boston, MA on November 1st, 2017 in the QRO Concert Photo Gallery

Click here for QRO’s review of Elbow at Webster Hall in New York on May 16th, 2014

As a live band, they are quite a unique proposition with the ridiculously affable frontman Guy Garvey never failing to have the audience in the palm of his hand from early on in the show. It’s this unpretentious and sincere connection with the audience that gives Elbow the edge over many of its contemporaries. Brothers Mark and Craig Potter and Pete Turner conjure up their own signature sounding backdrops for Garvey’s stories and observational lyrics, combining to touch the listener on a deeper level than many bands seem to manage nowadays.

Whereas hardcore fans of many bands may ignore the release of a Best Of, it seems presenting the highlights of their 20 years under the name Elbow is a good opportunity to remind their transatlantic neighbors just what appeals to so many people abroad about what they do.

The collection comes as a single album with mainly singles and an expanded double set with some of the finer deep cuts and album tracks which are no less worthy of airing in most cases. To the uninitiated, try sampling songs such as “Mirrorball”, “Grounds For Divorce”, “One Day Like This”, “Magnificent (She Says)”, “My Sad Captains”, “Lippy Kids” and “Leaders of The Free World”. If those whet your appetite then you are sure to be reeled in and repeatedly charmed by the northern Englanders and their stellar arsenal of reflective and life affirming tunes.

This collection is well worth buying in the 2-CD format if you are inclined to still want your music as a physical commodity. This will give you access to some more of their finest songs such as “Fly Boy Blue/Lunette”, “The Loneliness of a Tower Crane Driver”, “Switching Off”, “Any Day Now” and the always arresting “Starlings”. Both editions also contain a cover of The Beatles’ “Golden Slumbers”, which was recently featured in a high profile advertising campaign in the U.K. However, the treasures are in their original material.

Having followed Elbow’s musical evolution since the late ‘90s, the thing that strikes me is that they have remained true to their craft and grounded as people despite their considerable success. They were afforded the honor of “Mirrorball” being covered by Peter Gabriel on his Scratch My Back collaborative project a few years ago, and have certainly forged their own sound, which should appeal to intelligent rock fans across the spectrum.

Their comparatively modest profile in the U.S. has the positive side effect of being able to see them in more intimate settings, but given the passionate responses their shows get everywhere, it must only be rooted in a lack of airplay and broader touring. Either that or the subject matter of some songs gets lost in translation. Thankfully, given their humble nature, the band is not deterred from playing the U.S. and Canada. If you are a fan already, this is a tasteful distillation of what you love and if you are new to Elbow, this could be a taste of what you come to love for years to come.