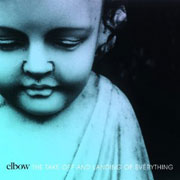 After the amazing high point that was 2008’s Mercury Prize-winning The Seldom Seen Kid (QRO review), Manchester’s Elbow took their time in following it up. 2011’s Build a Rocket, Boys! (QRO review) straightened things out a bit from the genres-spanning Seldom, moving nicely into a mix of intimate and grandeur; however, it wasn’t quite as impressive as Seldom. After the Rocket was built and launched, Elbow produced other things, like a b-sides album (Dead In the Boot) and their first live record, from their performance at Jodrell Bank Telescope (QRO photos) – they even wrote & released the BBC’s theme song for the London Olympics, “First Steps”. Now the band finally returns to a ‘regular’ studio album with The Take Offs and Landings of Everything, which further hones their excellent intimate/grand emotional mix.

“This Blue World” opens Take Offs, and like Rocket the record looks out its window in loss, yet feels anything but removed from events or feelings.  “Fly Boy Blue/Lunette” brings you in and down, while the subsequent “New York Morning” brightens like one.  “Honey Sun” is small and sly, but still sad, while “My Sad Captains” and “The Take Off and Landing of Everything” both hew to the older, bigger Elbow style.  In between, “Colour Fields” oh so slowly moves into your soul with refrain, “Bright girl / Dead town / Open mouths from round & round.” Other than the kind of lost in the air closer “The Blanket of Night” (the penultimate title track would have served better as finish), The Take Offs and Landings of Everything works just as well as you were hoping from the exquisite Elbow.