Double JJ Ranch in Rothbury, Michigan was sputtering with lights and music last weekend for the fourth annual Electric Forest.... 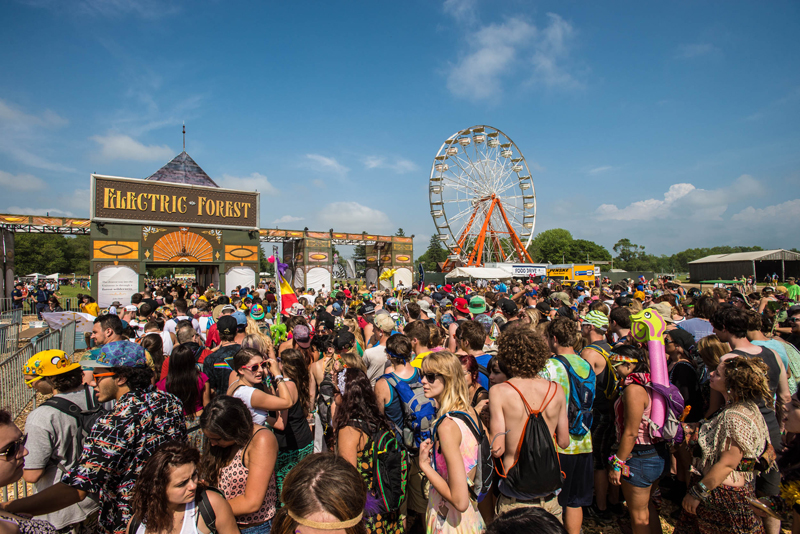 Double JJ Ranch in Rothbury, Michigan was sputtering with lights and music last weekend for the fourth annual Electric Forest, Thursday-to-Sunday, June 26th to 29th. In retrospect, it doesn’t seem right to classify Electric Forest as a “music festival”. Unlike other festivals, which tend to follow a predictable agenda, EForest has a dimension of its own.

The staff, artists, musicians, vendors, and attendees all coordinate together to transform the quiet horse ranch into a jaw-dropping, Technicolor fantasy universe. Though music is the focus, Electric Forest channels a lot of its energy into creating breathtaking yet cherished experiences. Sherwood Forest, the cluster of trees that cuts between the middle of the grounds, was the hallmark element to the festival. Once the sun sets, all of the trees are illuminated with multi colored lights and dancing lasers. Tucked away inside was a silent disco, two stages, and dozens of interactive projects that attendees discover as they wander through the forest. And though everything seemed so big – from the giant art installations to the Avatar-esque trees – there was a sense of intimacy and community that made this festival so special to each of the 30,000 people who attended. 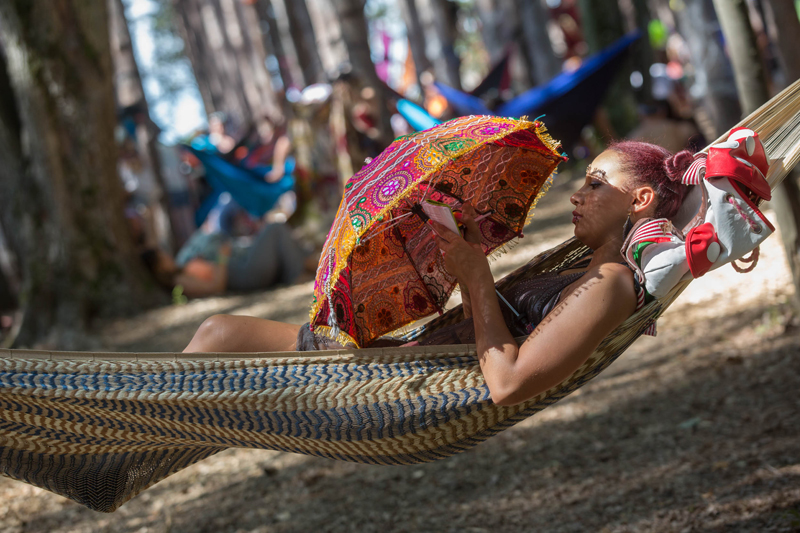 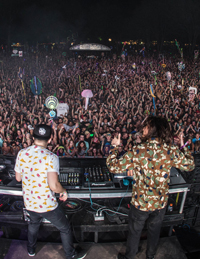 Campers were still trailing in the grounds by Thursday afternoon, but the music wasn’t waiting for anyone. Well, maybe except for Cherub, since they came about an hour late to their set due to flight delays (which would’ve been fine if they didn’t mention it after every other song). Either way the duo set off the day with easy-to-dance-to disco-funk echoing around the Ranch Arena stage. Colorado based producer Late Night Radio played at the smaller Observatory Stage inside the forest, but the crowd that surrounded him was pretty packed. His soulful, electro-hip hop sounds captivated his fans as well as a ton of new listeners. New York’s Penguin Prison played a great DJ set filled with their usual electro-pop and a few Prince remixes. Next in the Sherwood court, EOTO, a band featuring two members of The String Cheese Incident, played an incredible improvised jam-tronica set. Their hour and fifteen minute set probably contained sounds from every single electronic sub-genre you can possibly think of.

The Glitch Mob came on the Ranch Stage to headline yet another festival – they drew an enormous crowd who came to listen to the intense, mechanical set that contained a lot of songs from their more ‘extroverted’ new album, Love Death and Immorality (QRO review). Shortly after, Zeds Dead made quite the entrance on the Ranch Stage with thunderous dubstep infused sounds, including snippets of hard hitting drum and bass. In addition to playing old favorites like “White Satin” and “Rude Boy”, they threw down new songs from their EP Somewhere Else such as “Lost You” (which features indie artist Twin Shadow – who knew?). LA’s favorite disco duo Classixx played one of the last and best sets of the first night. Maybe our ears were influenced by the heavy beats of Zeds Dead, or maybe the sound system was just really good, but the set contained sounds that were clearer and more bass heavy than their sets at Governors Ball in NYC (QRO photos) or BUKU in NOLA (QRO photos). Although it was almost two in the morning, there was a mass of people dancing to “All You’re Waiting For” under a giant projection of Nancy Wang’s smug face. 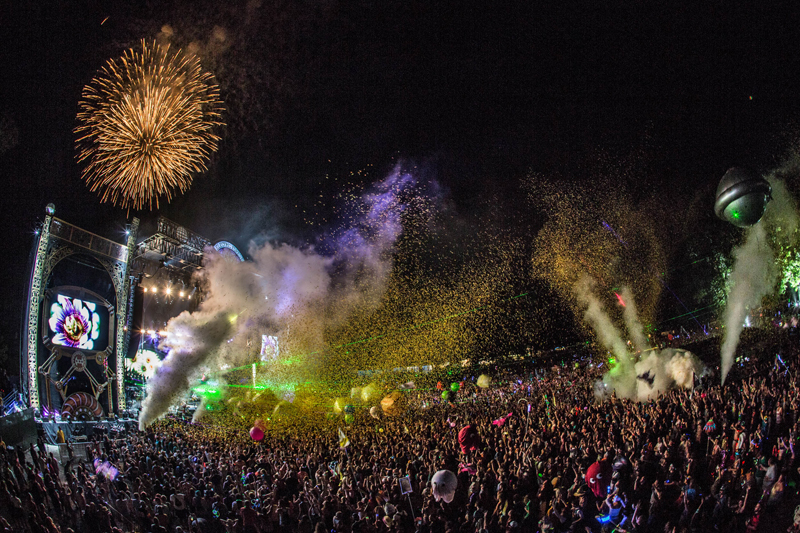 Chrome Sparks’ woozy, dream-like set started off the day second day in the Forest Stage, playing hits like “Marijuana” and “Send the Pain On”. The soft, engulfing sounds were a welcomed treat after the hard night before. The Tripolee Stage near the entrance of the venue was packed with a great and busy lineup on Friday. Lindsay Lowend’s upbeat trap was one of the best performances of that day – it was surprising to see the crowd so active and dedicated during his (yes, ‘Lindsay Lowend’ is a dude) early set. Things got pretty heavy on Tripolee after that – Pegboard Nerds, Dirty Phonics, 12th Planet, the drum-and-bass producer Andy C, and Excision kept everyone dancing harder for the rest of the day.

If that was too much for you, the other stages housed a slew of amazing jam/jamtronica bands that were just as energetic but not to the point of draining you out. The String Cheese Incident started off with a cover of Chromeo’s “Bonafied Lovin’” on first set of the festival, which gathered a hoard of devoted cheese heads on the Ranch Arena for almost four hours. Meanwhile, Disco Biscuits’ Brownie and Aaron Manger appeared for their side project Conspirator. In the middle of the set, Manic Focus was invited on stage to contribute with his funny looking keyboard guitar. STS9’slater performance was filled with soothing visuals and spacy beats that fit perfectly with the glowing forest placed directly across the stage. Their new song “New Dawn, New Day” carried on the night with a great mix of soft drum and bass beats with soulful vocals layered on top. Match that with cut-and-paste projections of the sunrise and you’ve got the perfect conclusion to the set. 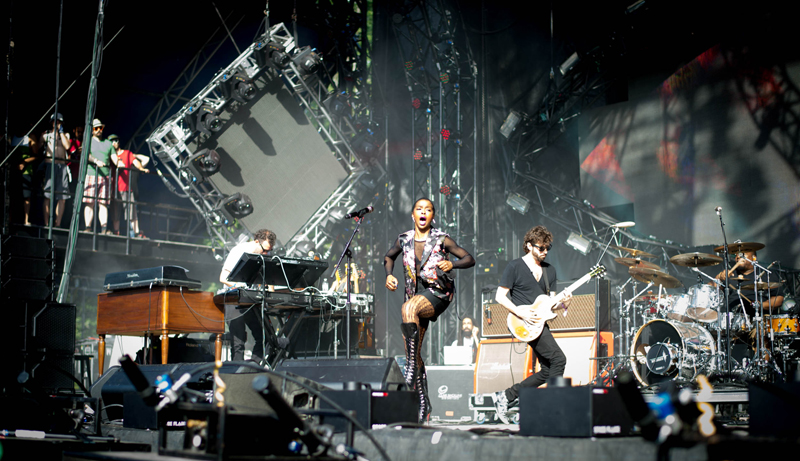 If you weren’t up early for the yoga session held at noon, it’s likely that you were still recovering in the campgrounds ‘til the evening. Thankfully many made it on time for the Emancipator Ensemble set at the Sherwood Court. Originally starting off as a solo producer, Douglas Appling expanded Emancipator’s live performances by including a full band. He played both familiar and newer songs from his repertoire for EForest as well as some improvised bits throughout the set. Next up in the sunset slot was Flying Lotus, the notorious experimental LA producer and founder of the BrainFeeder label. Before his performance began, FlyLo noted a few laser pointers from the crowd harassing his projection screen, which he dismissed by declaring, “My lasers are better than yours, I promise.” Flying Lotus in the live setting proved to be very different form listening to studio recordings – individually, his tracks are disoriented but when strung together live the bits and pieces begin to make sense. In addition to his own work, his set included tracks from like-minded producers such as the late DJ Rashad and Hudson Mohawk. 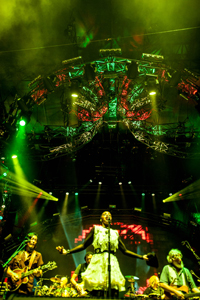 Over on the Ranch Arena, The String Cheese Incident played a collaboration with Ms. Lauryn Hill which was, according to one cheese fan wearing a tie-dyed Cheba Hut T-shirt, “…the best Cheese set I’ve seen in probably forever.” Blue Sky Black Death filled the Observatory Stage with atmospheric samples held down with subtle trap and hip-hop beats. Next on the stage was Psychedelic Friendship Bingo, an interactive game show that turns out, wasn’t really a bingo thing at all (or was it?). The cast proceeded to simultaneously confuse and delight the audience until the night was over. By the end, nobody was sure of anything except that Psychedelic Friendship Bingo was the weirdest thing that has ever existed on the face this planet. 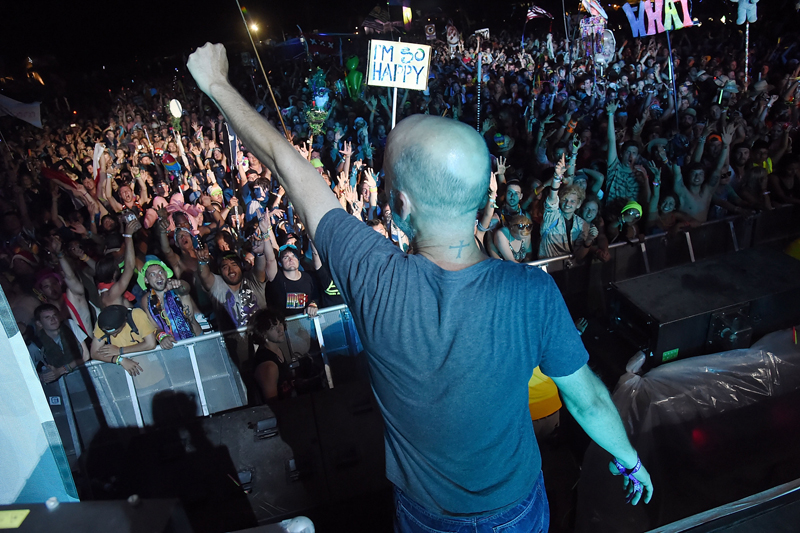 The grounds on the fourth day were surprisingly full – everyone seemed to fight their early afternoon exhaustion for the last huzzah. Although Lotus was not present for this year’s Electric Forest, their guitarist Luke Miller’s solo project Luke The Knife kicked off the day with an energetic funk-filled set. Later, everybody’s favorite up-an-coming Norwegian remixer Kygo drew in a large crowd at the Observatory to play a slew of familiar and refreshing beats.

As the night began to fall Tycho came on to play one of the most soothing and satisfying sets of the festival. Starting with the first song of their new album, Awake (QRO review), Scott Hanson and his band filled Sherwood Court with emotion that slowly intensified with every note. The set, as well as many other sets on their current tour (QRO photos earlier on the tour), was focused more on their new album as opposed to the earlier Dive or Past is Prologue. Even the visuals seemed to branch away from the familiar sunset scheme colors into something a lot more tangible. But the changes did not skew the fundamental warmth of Tycho – if anything it made it more stimulating and complex.

Finally, giant mob of people gathered around the Tripolee Stage to hear one of the most interesting electronic artists to date – Moby. His set blended a whole array of genres, such as of house and minimal techno, into an unpredictable yet cohesive set that was worthy of closing out the last day of another unforgettable Electric Forest. 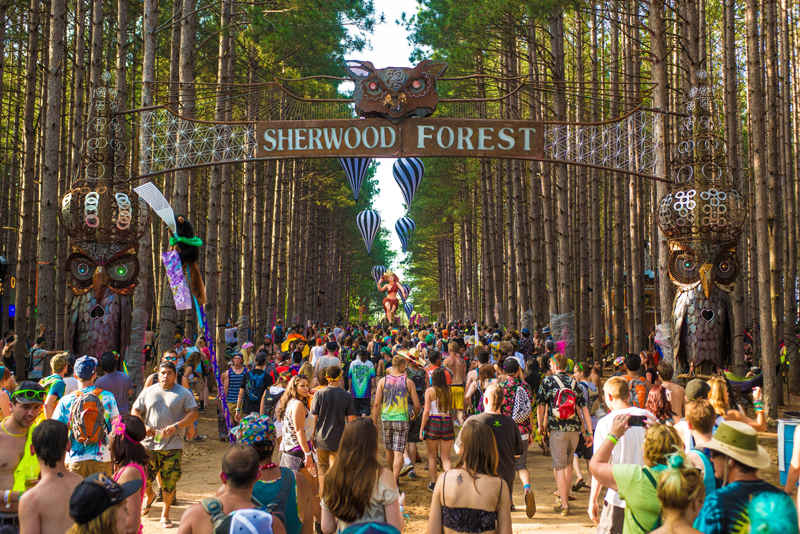