“I’m not sure where we are, or where we’re going,” said one girl to her group of saucer-eyed friends, “but this feels like the right way.”... 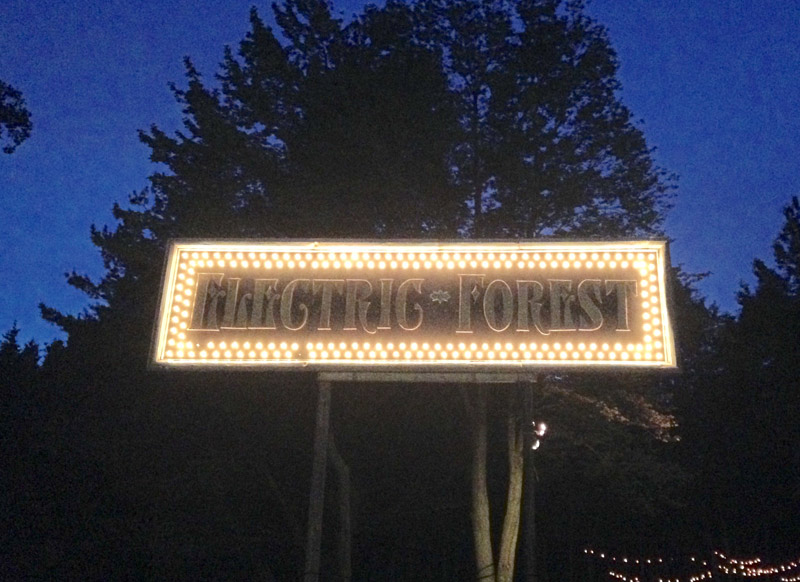 “I’m not sure where we are, or where we’re going,” said one girl to her group of saucer-eyed friends, “but this feels like the right way.”

Out of the hundreds of insightful quotes I overheard at this year’s Electric Forest, this one most accurately sums up the spirit of the festival. That kind of capricious mentality is what makes Electric Forest so distinct from all the other events. The Forest experience was not meant to be a predictable one. From the diverse lineup to the tangled paths of Sherwood Forest, everything in Double JJ Ranch was designed to encourage wandering, exploration and discovery – even if that means getting a little lost.

Word of the festival has obviously gotten around, ‘cuz tickets were sold out in less than two weeks after the initial lineup announcement. For months beforehand, ticketholders and reddit pages were on fire with rumors, predictions, and planning for the big event. And though expectations were higher than ever before, Electric Forest 2015 has exceeded them. Even the thirteen-hour drive and the larger-than-expected crowds couldn’t dampen my spirit & that of the 45,000 attendees congregating in our kaleidoscopic musical mecca in Rothbury, MI, Thursday-to-Sunday, June 25th-28th.

Thursday’s festivities started off a little slow due to the sheer number of people swarming towards the festival grounds. There was a four-plus hour line outside the main entrance, and a lot of people missed some of their must-see acts due to the overcrowding. Thankfully, the festival organizers quickly took notice and got the line moving more efficiently in the following days.

I was one of the lucky ones that made it in the grounds just in time for Australia’s Wave Racer at the Sherwood Court. His bright, pixelated dance set included his own tracks like “Streamers/Stoopid/Rock U Tonite”, his remix of “Best Friend” by Foster the People, Anamanaguchi’s remix of “Sad Machine” by Porter Robinson, and a little goofing around with Lido, who took over the stage after him.

One of the most anticipated bands of the festival, ODESZA, managed to pack the Ranch Arena from barricades all the way to the back vendors. Armed with dreamy visuals and live MPC drumming, the duo played a beautiful set that incorporated songs from their latest album, In Return, as well as tracks from Summer’s Gone and the My Friends Never Die EP.

EOTO, the improvised electronic dance group created by members of The String Cheese Incident (see below), played next at the new Jubilee Tent (the one with the cute Jellyfish hanging from the ceiling). What I love about EOTO’s performances is that they don’t use any pre-recorded samples – every sound is created right there on the stage. The group played a wholesome set filled with dubstep and electro, peppered in with jam band-y pacing and transitions throughout.

After Four Tet, Flume came on the Sherwood Court Stage to close out the first day. His set was everything you would expect from Australia’s most successful producer (and more). He started out with familiar, softer songs like “Sleepless”, “Holding On”, and his remix of Disclosure’s “You and Me”. Then the performance unexpectedly transitioned into a hip-hop session with “Mathematics” by Mos Def and a Biggie track. After thanking the crowd for being with him on the last show of his 2015 tour, he broke out his remix of Lorde’s “Tennis Court” then ended the night with RL Grime & What So Not’s “Tell Me”.

On Friday the Tripolee Stage was taken over by Insomniac’s BassRush, showcasing the sounds from the deeper end of the electronic music spectrum. Artists like Illenium, Vaski, Koan Sound, Snails, Datsik, and Flux Pavilion kept Tripolee wubbling and wobbling from noon to 3am.

A feature that Electric Forest executes really well is their Silent Disco. Though silent discos are seen in almost every festival, it’s not as common to see one that’s as consistently active throughout the day. It was refreshing to see people taking advantage of every corner of the dance floor, instead of all facing front and crowding towards the stage.

My favorite artist at the silent disco was DJ Psycho, who played an all vinyl, Detroit house/techno set for the crowd on Friday night. He closed his set by pointing out that he and his four buddies from the Detroit Techno Militia were the only Detroit-based artists in the festival, despite the fact that it took place in Michigan. He warned the audience that there would soon be a “massive Detroit takeover” in the electronic scene the coming days.

The headliners of the festival, The String Cheese Incident, played the first of their three sets for the festival later on Friday. Before taking over the Ranch Stage, Skrillex returned to his acoustic roots and joined SCI on guitar for their encore to play The Doors’ “Break On Through (To the Other Side)” and “L.A. Woman”.

Meanwhile, jamtronica band Lotus held it down at the Sherwood Court. Though the crowd was sparse, the band carried through with so much energy while playing songs like “Age of Inexperience” and a funky rendition of Disclosure’s “When Fire Starts To Burn” and “F For You”. 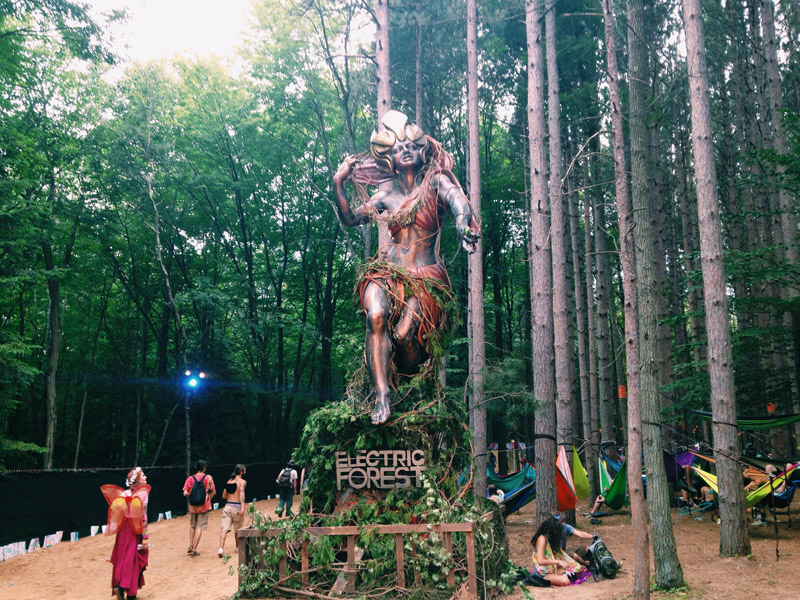 A series of features and showcases were waiting for the early afternoon risers at Electric Forest, including “The Power of Women in Festivals” panel, a hula-hoop showcase, a beer tasting, and a marching band flash mob by the local high school.

The rest of us who were still recovering missed out, but luckily there was still a ton of sights and sounds to experience throughout the remainder of the day.

Over at Sherwood Forest, Phantogram gave us a breathtaking performance during the sunset. The duo started with songs from their latest album, Voices (QRO review), while eventually incorporating their signature tracks from Eyelid Movies (QRO review) such as “Mouthful of Diamonds” and “When I Am Small”.

Later, what seemed like the entire EForest crowd gathered around the Ranch Arena to worship the one and only Bassnectar – his first time playing since he headlined Electric Forest back 2012. The excitement was very tangible: you couldn’t walk two feet without bumping into someone who had a Bassnectar logo mounted on a T-shirt, totem, hat, bra, etc. (I honestly felt naked without some kind of Bassnectar paraphernalia on me). The first song he played was the transient track, “Into the Sun” from his latest album of the same name, which really set the tone for the rest of the night; with slightly lower bpms and longer transitions, the hour and a half set seemed more like an introspective daydream than a rage-your-face-off kind of frenzy.

Despite the three days of non-stop dancing, everyone pulled through to make it for the last huzzah. Sunday’s music at Tripolee kicked off with one of my favorite producers from the west coast: Tokimonsta. She proved once again that she really knows how to read the crowd – she put an emphasis on her hard-drops/heavy trap side, as opposed to the of the experimental electronic side we may be more familiar with. Though this was the first of her two sets that day, she did not hold back from throwing everything to get the crowd dancing from start to finish.

Next was a smooth, sexy, and funky set by Exmag at the Jubilee Tent. Towards the middle of the set, his fellow Lowtemp label buddies Gibbs and Russ Liquid joined on stage to provide vocals and additional instrumentation.

Josh Legg of Goldroom played at the Sherwood Court with his newly expanded four-piece band. They played a series of emotive, sepia-tinged songs like “Till Sunrise”, “Fifteen”, and “Embrace”, which perfectly matched the mood of the last sunset of the festival.

Later in the evening Gramatik took over Sherwood Court with several members of his Lowtemp label on stage to help with vocals and instrumentation. Next was the drum-and-sax duo Big Gigantic to close out the festival. In the middle of their set, they invited the jam band The Motet – which Dominic Lali used to be part of – on the stage to play with them for the rest of the night. Following and mind-blowing rendition of “Uptown Funk”, Big G and The Motet ended with encore with Knife Party’s “Bonfire” and “Uprising”. For those who were lucky enough to find it, the night didn’t end there – Big Gigantic and Cherub threw an impromptu sunrise set on top of an RV down at the GA campsite. 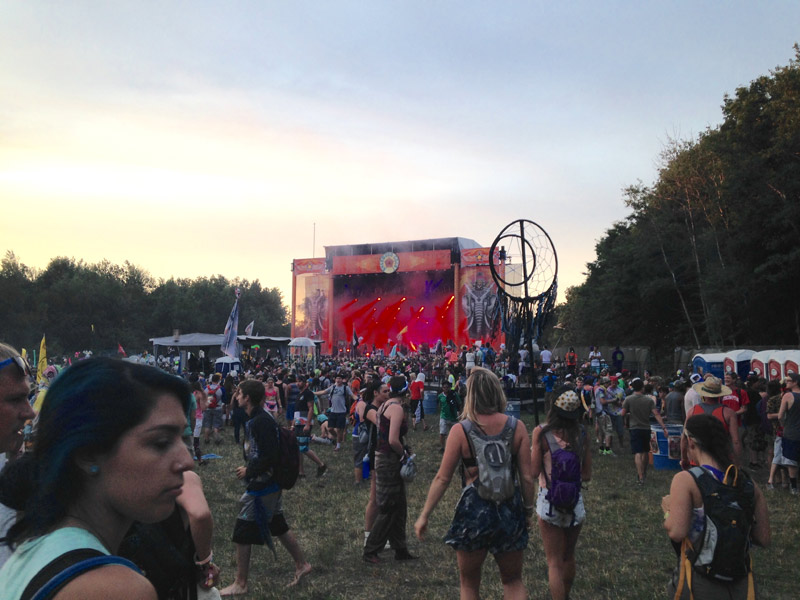