While it still has some filler like any Electric Six record, it’s a nice return to their mock rock sound.... 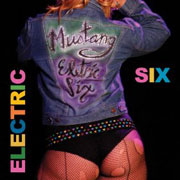 Detroit’s Electric Six have always been a hard-working band, touring incessantly and seemingly releasing a new record every year, but 2012 saw the band take the first break in a long time, and 2013 wasn’t an immediate return to the heavy workload.  However, they did release Mustang, and while it still has some filler like any Electric Six record, it’s a nice return to their mock rock sound.

That big E6 mock rock comes out right from the start with “Nome de Plume” and “Jessica Dressed Like a Dragon”, and while that provides Mustang’s backbone, it’s where the band goes for more that the record shines.  “Adam Levine” is the best kiss-off track to a megastar since…, well, Electric Six’s “Lenny Kravitz”.  Their mock disco on “The New Shampoo” has been around long enough that people are doing it seriously, but Electric Six aren’t (and it’s their gayest song since breakthrough hit “Gay Bar”).  Only singer Dick Valentine (QRO interview) could have a love song to processed food in “Late Night Obama Food”.  And the album closes with the mock horror “Cheryl vs. Darryl”.

Of course, at fourteen tracks (which is about standard for an Electric Six release), there are forgettable songs (“Cranial Games”, “Unnatural Beauty”) – one might have hoped they’d used their extra time to pare down this album.  But it’s just great to have Electric Six back.

We Are Scientists – “Make It Easy”