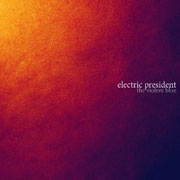 When Electric President’s self-titled debut came out in 2006, the band was notable for being one of the few American acts on German electronic imprint Morr Records.  But since then, America’s become a lot more open to the President’s brand of indietronica, and they reciprocated with 2008’s sophomore Sleep Well (QRO review), an enchanting, accessible, sweet lullaby.  Now the Jacksonville duo of Ben Cooper and Alex Kane raise America from its sweet slumber with Fake Four release The Violent Blue.

Unlike Sleep Well, Violent Blue‘s title isn’t apropos – this is neither a ‘violent’ nor particularly ‘blue’ record.  There’s moments of sadness, such as opener "The Ocean Floor", a swaying little piece that could serve as closer on a downbeat indietronica record, but here is just the last whispers of sleep before rising; actual closer "All the Distant Ships" is a more fitting ender, taking the sway of "The Ocean" and going brighter & bigger.  The growing brightness of The Violent Blue, never harsh, is its best nature, like with the sweet processions "Feathers" and "Circles", or the clap-uplift of "Safe and Sound".

When Electric President get away from that sound, Blue suffers.  The stripped plucks of "Nightmare No. 5 or 6" unnecessarily take away from its great growth.  The following eponymous piece has a good intimate-into-grand way, but one can’t help feeling like you’ve heard this before, from artists where it is their stock-and-trade.

Whether you prefer the soft slumber of Sleep Well or the dew drop awakening of The Violent Blue sort of depends on whether you’re a morning person or not (and what kind of dreams you have).  But Electric President are crafting some of the sweetest indietronica out there.