On the Hudson River, The Temptress was a-rockin’ – but it wasn’t from the waves, but from the crazy crowd for Electric Six.These Detroit rockers have long been known for their incredible (dare one say, ‘electric’?…) live show (QRO live review from Boston), so when Rocks Off Concert Cruise scheduled them for Thursday, August 14th, it quickly became a must-have ticket – despite the high price.  But what occurred was extreme even for a booze cruise, even for Electric Six…

A notable feature of all Rocks Off Concert Cruises (QRO venue review), both aboard The Temptress and the smaller Half Moon (QRO live review), is that the band plays on the same level as the crowd.  On The Temptress, the consequent line-of-sight problems are dealt with by a second-level balcony, which rings around and above the stage/stage floor.  While this creates some great spots from which to watch the band, it is a little more removed than one would like to be for a wild band like Electric Six.  So the really ‘dedicated’ fans packed the stage floor – and were packed in, with the space there being limited by the low ceiling of the balcony.

With the kindling down, Electric Six lit the fire.  They started with “We Were Witchy Witchy White Women”, a hard-hitting grand rocker from their upcoming Flashy (QRO review).  But it was early classic “Gay Bar” (off their 2003 debut, Fire) that really ignited things, from its first, unmistakable guitar riff.  By the time the band hit up their self-declared ‘controversial’ song, the gets-you-going, jump-around “Down at Mcdonnellzzzzz”, from last year’s I Shall Exterminate Everything Around Me That Restricts Me From Being the Master (QRO review), security had come out to keep the fans from falling over the monitors and right into singer/frontman Dick Valentine.  At first security did so gamely, still leaving some exposure between Valentine and the fans through “Be My Dark Angel” and Exterminate’s “Dance Pattern”, but had to thicken as the night progressed and the show just got more energized.

However, Valentine (QRO interview) is a frontman par excellancé, and wasn’t going to let some little thing like people crashing into him or big, burly security guys protecting him mess with his show.  He thanked the crowd, saying how wonderful it was to have such a base in the Big Apple, which led to connections in ‘the record industry… the financial industry…’ and let them tour the country and “pretend that it’s actually those people who make us famous…”  He timely changed the title of “Germans in Mexico” to “Russians in Georgia”, and also shifted his dedication of their other ‘political’ song, “Rock & Roll Evacuation”, from President Bush to the next president, which he claimed would be former Massachusetts governor (and failed GOP aspirant) Mitt Romney, because he predicted that Senators Barack Obama & John McCain would ‘implode’ at their debate and Romney would move in – and “it doesn’t matter that this scenario is highly unlikely, it doesn’t matter that the next president will eventually be someone else – this song is dedicated to the future existence where Mitt Romney is actually president…”  He joked about the band’s drummer, who grew up on a boat, saying, “My drummer grew up on a boat… My drummer had hippie parents… The only rules were the rules of the sea… My drummer lived at sea… And my drummer knows… that this is the greatest audience he’s ever seen in his life!” 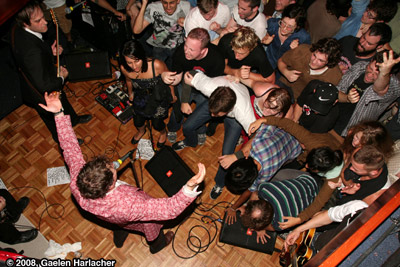 Yes, Valentine did ask a few times for everyone to take a step back (and thanked the security guards).  There was one weirdly well-dressed (but still wild) fan who seemed to alternate between being the most aggressive fan at the front of the crowd, and trying to hold everyone back – and he appeared to get the most attention from security, eventually being hauled off to the back of the stage floor, after he had fallen directly on the stage floor (and not gotten up too fast…).  And whether Electric Six was rocking old chestnuts like “Danger! High Voltage”, a foursome from Fire’s follow-up, Señor Smoke, more recently released numbers like “I Buy the Drugs” and “Lenny Kravitz”, or Flashy tracks like “Formula 409”, it was evening no one would soon forget.

Electric Six playing “I Buy the Drugs” live at Rocks Off Concert Cruise, The Temptress, in the Hudson River, NY:

Oh No Oh My