<img src="http://www.qromag.com/wp-content/uploads/2009/05/elephantstonethesevenseas.jpg" alt=" " />The High Dials' Rishi Dhir brings the sitar & the sixties on his solo debut as Elephant Stone. ... 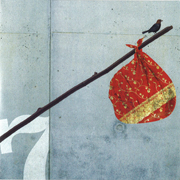 Rishi Dhir has been trying to bring the sitar back into pop for a while now, mainly as part of Montreal’s The High Dials, but also doing work with Austin’s Black Angels and Manchester, U.K.’s Earlies.  And now he’s decided to do it himself as Elephant Stone, on his solo debut The Seven Seas.  However, it’s not the sitar that’s most noticeable on this record, but his alt-pop sensibilities.

Less than half of the tracks on The Seven Seas have any sitar, and it’s Dhir’s bright, neo-Sixties indie-pop that really comes through, right from the get-go with opener “Bombs Bomb Away”.  On tracks like that and the smooth-sounding “I Am Blind”, Dhir channels an enjoyable sound, but he also gets a little darker, or at least sadder, at times, such as “How Long” or “Oh, Heartbreaker”, though “Blood From a Stone” is a bit over-heart.

Click here for photos of Elephant Stone at TT the Bear’s in Cambridge, MA on December 8th, 2012 in the QRO Concert Photo Gallery

Dhir does weld his sitar on The Seven Seas’s title track, and it is more interesting there than the sad pop-loss.  However, the sitar struggles to compel on “A Morning Song” or instrumental “The Straight Line” – not as off-putting as you’d think a sitar instrumental would be, but seven minutes of it?…

The Seven Seas closes with maybe the best combination of sitar & indie, “Don’t You Know”, but it’s in the form of alt-rock expanse, not neo-Sixties Brit-pop, as the sitar jam it enters into gets really rocking, without feeling indulgent.  There’s still some work to be done to bring the sitar into today’s modern indie world, but Dhir has the tools and is doing his best.