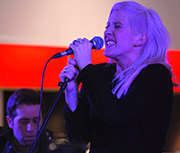 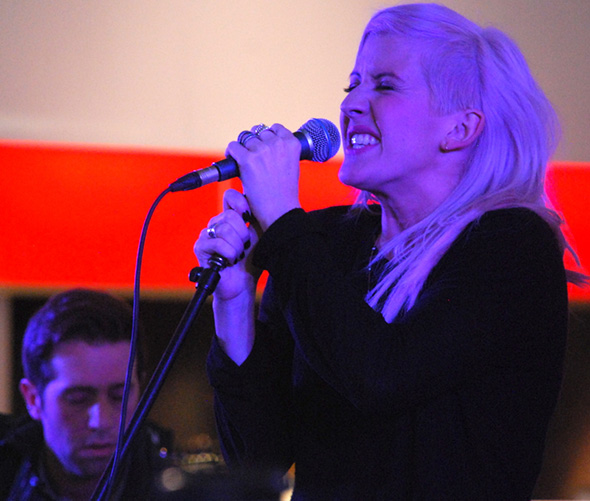 Last year was a very good year for Ellie Goulding.  The Hereford, U.K. native played everything from Saturday Night Live to the royal wedding of Prince William & Kiki Wigglesworth Kate Middleton, as well as headlining around the world.  But there was still something new in store to kick off 2012 – playing an airport terminal, specifically Queens, New York’s JFK Airport, Terminal 5, for JetBlue’s ‘Live at T5’ on Thursday, January 19th. 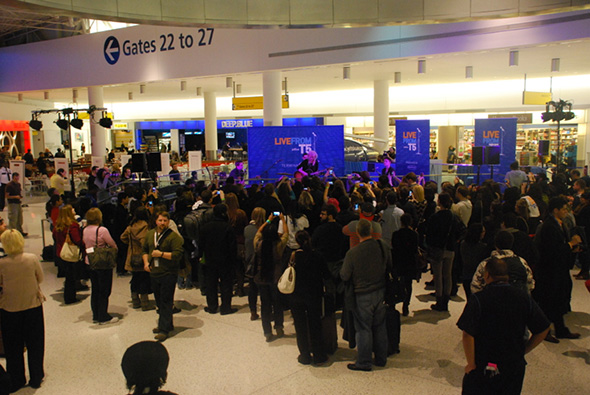 The whole event was a curious one.  It was in an honest-to-god terminal, JetBlue’s dedicated one, in the main plaza, surrounded by duty free shops where people like to stop.  It was held at 5:00 PM on a Thursday.  The crowd was a mix of contest winners, press/VIP, and whoever was in the terminal to catch a flight.  It was way out in Queens, but contest winners & VIPs did get a free bus to & from the event at Union Square.  Even if you weren’t flying, you still had to go through security, with an honest-to-god plane ticket – even the band (and their equipment) had to go through TSA screening, resulting in a stripped down set.  It was only a half-hour with seven songs, but you could get your picture taken with Goulding after the set, and get a signed photo & t-shirt.  In many ways, it was similar to the events held at iHeartRadio Theater (QRO venue review) – VIP/contest winners only, early start time, short set, unusual sponsor, unusual location, big-name act.

Click here for photos of Ellie Goulding at Lincoln Hall in Chicago, IL on March 30th, 2011 in the QRO Concert Photo Gallery

And Ellie Goulding was just the right pick for this kind of event (and this wasn’t a one-off – previous shows there in prior years have had Chris Isaak, Taylor Swift, and others).  She’s a big-name act with loyal fans that’d endure the trek out to deepest Queens – and form a massive line to get to meet her.  But she’s also so new that she doesn’t have a huge stable of songs, and so didn’t have to skip any key ones for the short set.  While her breakthrough debut Lights is electro, the singer/songwriter is more than capable at playing a stripped-down show – indeed, it made it a special, unique event.  Plus being a cute British girl really lends to the international flavour one would want when seeing a performance at an airport. 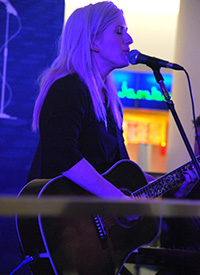 Goulding opened with “Starry Eyed” and “Under the Sheets”, then stopped to “wet her whistle” (do you have that phrase here in The States?” – though she was just drinking water…).  Throughout the set made sure to tell the crowd what song she and her band would be playing next – while the contest winners all knew them by heart (and would cheer whatever she announced was coming up), it let those passing by know what was going on.  Indeed, Goulding seemed particularly interested in talking to people who were flying, including some going to Orlando (with which she praised Disney World, “I think I had the best time of my life…”) and some going to Los Angeles – on the same flight that Goulding herself would be on (if she was telling the truth about flying to Los Angeles on JetBlue – might have had to say that to appease the sponsor, but one hopes it was true, as otherwise she’d have to go through security again… – update: she did indeed fly to L.A. on JetBlue).  “Who’s stopped by just to check this out?  Thumbs up?” 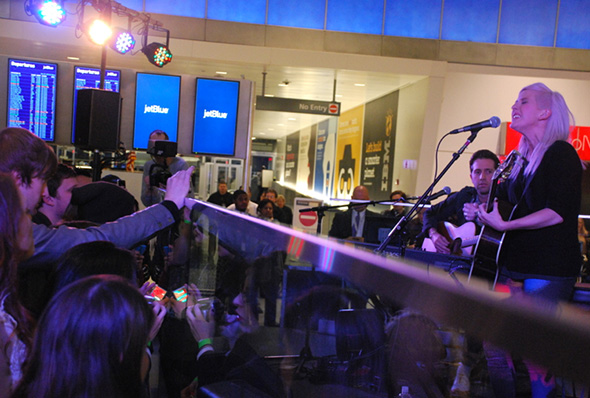 The great Lights opener “Guns and Horses” might have been the only song that suffered from removing some of the electro (also suffering were photographers, as Goulding played on a riser only a few feet above the floor, with no photo pit, and glass and a big railing right between them & the performance – one photog went behind the back barrier to the stage and put his camera above it, which Goulding pointed out as a “sneaky camera”), but “Wish I Stayed” was pitch-perfect for the occasion, as, “This song’s about missing home” (it was also one that Goulding admitted that she hadn’t played in ages).  There was a bit of confusion between Goulding and her band about what to play next, with Goulding remarking that, “I’m not Lily Allen…” before adding, “She’s awesome, though…” 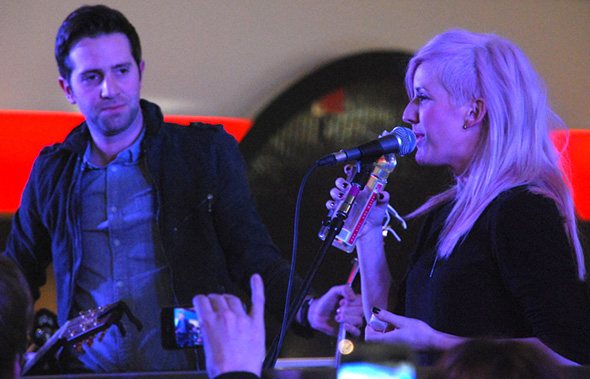 The group decided on “Your Song”, Goulding’s U.K. chart-topping cover of Elton John – only to see it marred by a door alarm going off in the middle of it…  They stopped and laughed that it was “bloody typical” something like this would happen, started again from the middle, only to realize they hadn’t all started at the same place and had to stop again – Goulding even said a word worse than “bloody”, but quickly apologized, and she & her band started again, this time in sync.  They closed with Lights closer “Salt Skin” (the song that they had originally planned on doing before “Your Song”) and the title track – “This is like ‘Lights’; well, it is ‘Lights’…”  And the contest winners got to get their picture taken with Goulding after the set (and after forming a long, winding line). 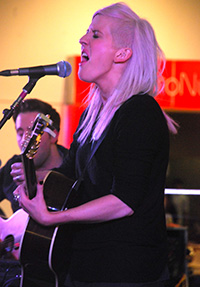 [note: QRO would be remiss if it wasn’t mentioned that the ticket for your correspondent had the wrong first name – ‘TOM Chase’?!? – and he had to wait forty-five minutes for them to print a new boarding pass, this time at the ticket desk (though nobody told a surly guy working there that this was happening, who nearly sent your correspondent away for good); even the TSA agent who had caught the discrepancy when checking the pass before going through security was surprised at how long it took.  TED (well, actually Frederic…) Chase missed the early meet-and-greet, and only made it through security just as Goulding was starting. 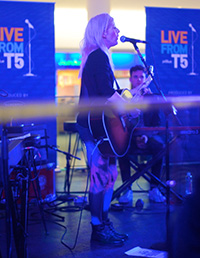 On the other hand, it did show that TSA was on the ball (one has to think JFK has probably the best agents, tightest security, of any airport in the country).  And the JetBlue staff running things were nothing but gracious and apologetic – plus the hired security guy who led your correspondent through everything turned out to have worked security at legendary venues for legendary bands like Janis Joplin & The Grateful Dead at Fillmore East (who had performed at noon for three bucks!?!), and still had his original ticket from Woodstock (‘cause nobody ever took it – he just walked in…)]

‘Live at T5’ – which is not to be confused with west Midtown venue Terminal 5 (QRO venue review – though that place is admittedly airplane hangar-like, Goulding has played there, and some said the sound was better at JFK…) – is going to continue throughout the year, and picked a great way to kick off their season.  And Ellie Goulding picked a special way to kick off what is sure to be another great year for her, too. 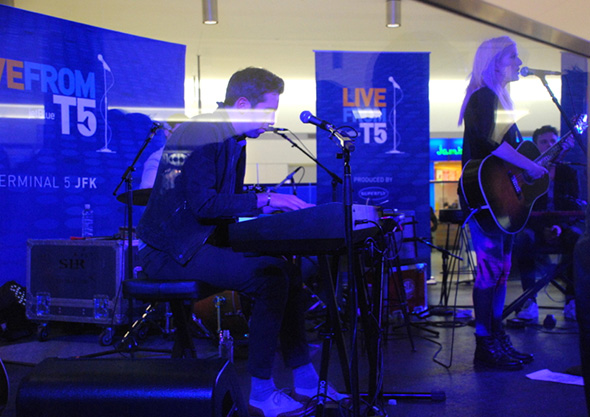 Tom Waits : Bad As Me