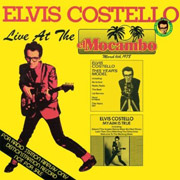 Elvis Costello is such an established figure in rock ‘n’ roll that at this point, you don’t even notice his name (how many years did it take you to notice the spelling of ‘The Beatles’?…).  But thirty years ago, Declan MacManus was just some weird fusion of punk, rockabilly, and Afro-rhythms, in a Bizarro Buddy Holly package.  His first tour of North America included a memorable appearance on Saturday Night Live, and a stop-off at Toronto’s El Mocambo club.  Recorded as a promotional-only Canadian release, Live at The El Mocambo was heavily bootlegged afterwards, before being included as part of the 2 ½ Years box set in 1993, and now is out on its own as part of the Hip-O ‘Costello Show’ series of live recordings, highlighting the icon’s early ability to combine the energy of punk with rock ‘n’ roll artistry.

Recorded for live broadcast, Live at The El Mocambo is not a great ‘recording’ as such, with a lot of audience sound, and an imperfect pick-up of Elvis Costello & The Attractions.  But that raw nature helps connect one to the times, as opposed to many of today’s over-polished remasterings – especially when you’re talking about the late seventies, when punk rock rose up in rebellion to the overdone wankery of classic rock.  Elvis Costello might have been classified as ‘punk rock’ by British record execs, but the garage-stop rock of the night’s opener, "Mystery Dance", hewed much more to the sounds of the youth of two decades earlier.  The name & look didn’t entirely come out of nowhere, but early on, there was still that decidedly ‘Costellian’ spin on such material, like the swing of "Waiting For the End of the World" & "Welcome To the Working Week", or even the mock-croon of "Less Than Zero".

There still some surprises on Live at El Mocambo, or at least refreshing reminders (depending on how much one knew about Elvis Costello going in).  The most significant has to be his proto-two/tone sound; "The Beat" feels like it could have been the blueprint for the entire ska-influenced sound out of the U.K. in the next decade (The Specials, Bad Manners), and probably was (think of the band, ‘The Beat’…).  Costello’s drawing on fifties sounds, the raw nature of the recording, and that it was a club show, not one of the huge, Grateful Dead/The Who/KISS/etc. stadium shows of the day, combined with the record’s age, also harkens one back to bygone days of rock ‘n’ roll, a more innocent & exuberant time, like watching film of the ’69 Mets.

Just over half the way through, Elvis Costello & The Attractions go into their encore break, but while their encore return is long, it includes some of the record’s most forgettable numbers, like "Lipstick Vogue" and "Watching the Detectives".  But it also features Costello’s introductions of The Attractions during "Miracle Man", and an excellent rendition of the Costello classic "Radio, Radio".

Just the year prior, Elvis Costello & The Attractions appeared for the first time on the then-new Saturday Night Live (filling in for couldn’t-get-visas Sex Pistols, alongside the winner of the ‘Anyone Can Host’ contest), and, after starting "Less Than Zero", Costello stopped himself & his band, apologized, saying, "There’s no reason we should be doing this song here", and launched into the infamous rendition of "Radio, Radio".  While the story was later miss-told as SNL didn’t want Costello to sing the anti-radio (and thus also anti-TV) song on-air, it was actually that his label wanted him to push then-single "Less Than Zero", as opposed to the new "Radio" (also, "Zero" was about British fascism, and thus "no reason" to do it in America).  "Radio, Radio" is the superior song, but more importantly, in these days where Elvis Costello has his own TV show (Spectacle – QRO Indie on Late Night TV listings), Live at El Mocambo is a great introduction to those who don’t know, and reminder to those who forgot, why the icon’s so iconic.