<span style="font-style: normal"><img src="http://www.qromag.com/wp-content/uploads/2010/04/emanuelandthefearapr12.jpg" alt=" " />Set loose on the Autobahn as strangers in a strange land, Emanuel & The Fear are getting a little grimier.<span>  </span>And they've... 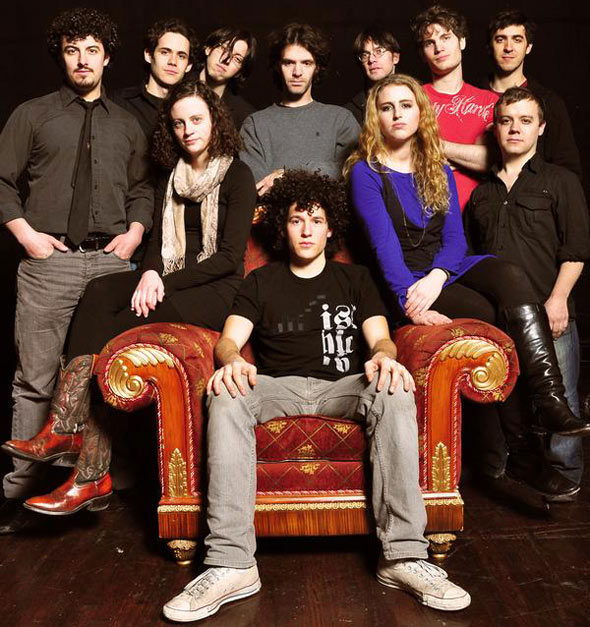 Swamp, a cozy rock club in Freiburg, Germany, is the sort of place where you’ll walk in, order ein Bier, and be best friends with the owner in less than five minutes.  He’s a responsible business owner with a respectable German name, but he’s got a wild look in his eye and goes by the moniker "Chico".  Say hi to Chico if you’re in the neighborhood and make sure to catch a show because there’s something about the place that can grow a little chest hair on even the most inexperienced artist.  Not that Emanuel & The Fear are musical virgins.  The eleven-piece (yes, eleven) orchestral pop ensemble has been knocking about their native Brooklyn (no slouch locale for music lately) a good while, racking up mentions from the likes of L Magazine and company.  But when you listen to a song like "Dear Friend" on record there is this impossible polish that shouts out to the world, "Hey, I’ve never been spit in the face by an angry gibberish-speaking Euro high on amphetamines while on tour!"  The tracks sound so smooth, they could have been lifted from a Broadway musical.  Happily, Chico and the Swamp came to the rescue on Monday, April 12th, reminding us that you better hear a band live before you pass final judgment.  Sporting only six members (paying the way for eleven people on a European tour is a pretty tall order for most), the band sounded rawer, grittier, saltier in person.  Set loose on the Autobahn as strangers in a strange land, Emanuel & The Fear are getting a little grimier.  And they’ve never sounded better.

The recurring joke of the tour must be the sight gag of seeing the six touring members of the band packed like sardines onto tiny stages like the one at Swamp.  The flute, guitar, bass, violin are no problem, but fitting a drum kit and a monstrous cello into intimate spaces is a special challenge (not to mention the music stands that classically-trained artists insist upon).  The band took it in stride: it’s all part of the deal of life on the road: a new venue every night with new fans and new bridges to build.  Emanuel (who, by the way, is a sick whistler) explained to the audience that the smaller stage made for a quieter set that "…made him feel all warm and tingly inside" (before worrying that he had laid himself open to misinterpretation by non-native English speakers: "…I hope that made sense….").  It made perfect sense; besides, Germans speak better English than most Americans.  Emanuel & The Fear took a smaller stage as an opportunity to deliver a more intimate set.  They steered clear of the bombastic synth-drenched numbers and stuck to a more heartfelt Americana flavor.  The full house at Swamp ate it up to the tune of two encores, "Comfortable Prison" and "Over and Over Again".

One of the comparisons that get tossed around with Emanuel & The Fear is Arcade Fire (QRO live review), and it’s easy to see why.  Both bands go big.  Both lean on orchestral textures.  Another comparison you might have heard is Polyphonic Spree (QRO album review), because they love the Clorox-clean, multi-layered vocal arrangements.  But Arcade Fire and Polyphonic Spree were not the bands that showed up Sunday night in Freiburg.  It was a duskier, danker band that showed up.  A band that sounded like it belonged in the club, not the recording studio.  Let’s hope they bring some of those rougher edges back to America when the tour’s finished.  Who knows?  Maybe we’ll hear it on their forthcoming album (from which most of the set list was drawn), Listen.  Tune in and find out whether Emanuel & The Fear have got a pair.