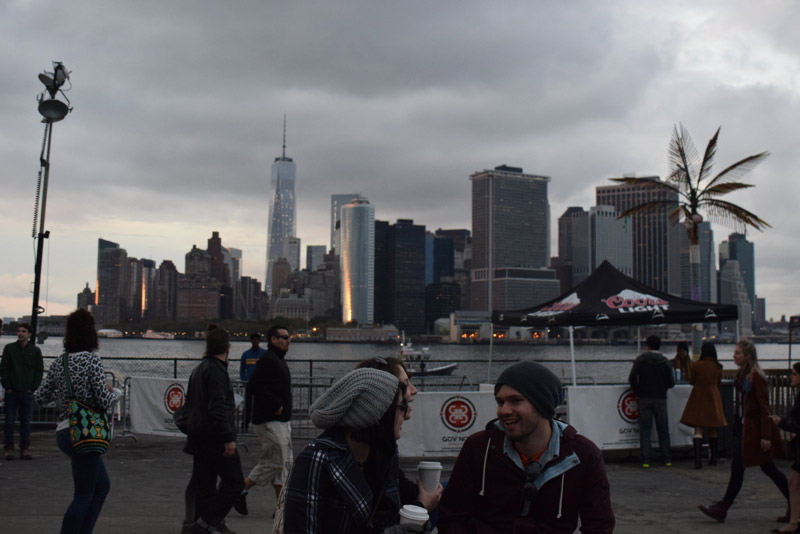 On Saturday & Sunday, October 11th & 12th, DJ outfit The Most Definitely organized the Escape Music Festival in New York. Originally to be on a pier in Red Hook in Brooklyn, it was moved a week beforehand to Governors Island Beach Club (QRO venue review) south of Manhattan, due to undetermined reasons (some said neighbor complaints, some said issues with landowner Port Authority, some said ticket sales). This wasn’t the only issue the festival would have. While it never poured rain, it was cold both days – yes, that comes with booking an outdoor event in October in New York, but only days after it got much hotter outside. Having to take a ferry to & from the event isn’t ideal, either. And beers were eight bucks. But the acts did shine through.

Escape was set up as an interesting mix of indie-rock and EDM, though instead of picking acts that crossed those two genres, it was acts from either. This meant that you got the indie hipsters and the electro kids, but also a lot of downtime when the artists you came to see weren’t playing. And that was downtime in the cold, with eight-dollar beers (the five dollar tacos were good, however). 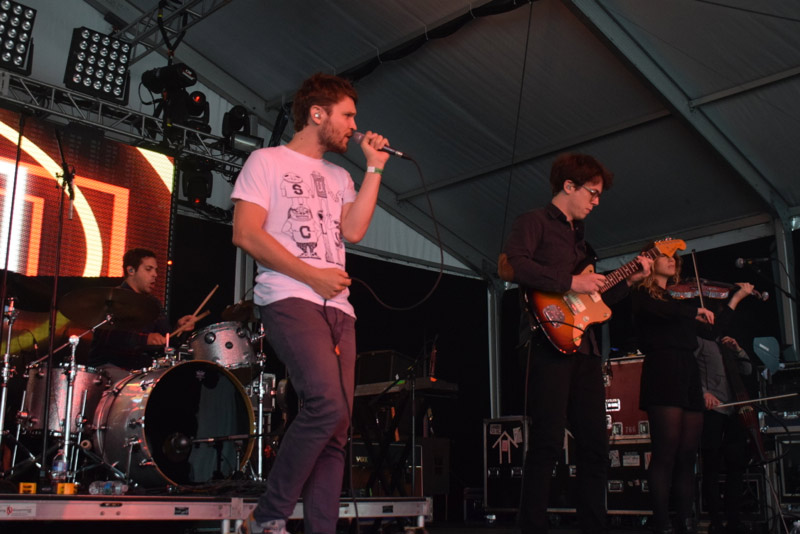 On Saturday, Governors Island Beach Club began to fill when the ferry docked as Ra Ra Riot played. The group did their best to bring their energy, and though not at the heights of other shows of theirs, they still played some great songs. It was especially nice to hear some older material, as this was one of their first shows since touring last year’s Beta Love (QRO review). 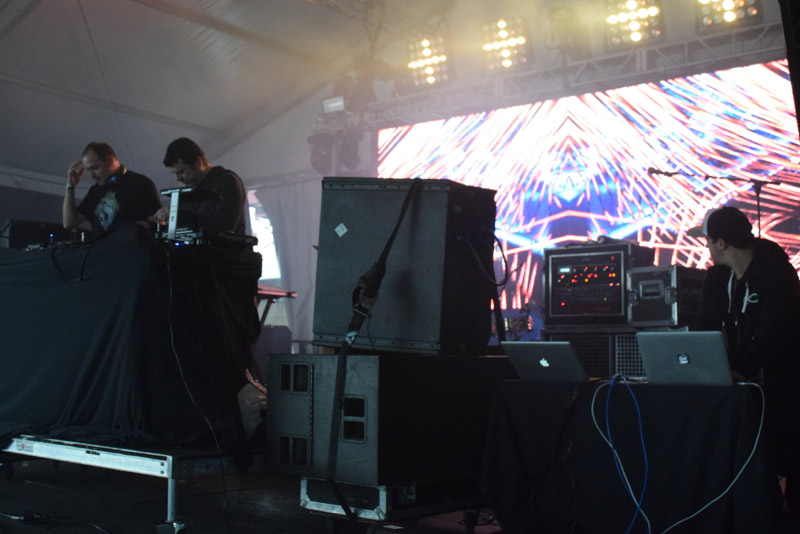 Whether indie like Ra Ra Riot or EDM like following veteran DJ The Crystal Method, credit must be given to the artists at Escape for not being dimmed by circumstances. That included tech problems for Crystal Method (as well as too much smoke machine), but the DJ is a justifiable legend. Yeasayer broke a “wireless guitar thing” of theirs, but were certainly upbeat, joking about the place they made a prior record now being a J. Crew, “We get discounts there for life…” They didn’t quite have the presence that they brought to the same space (if a bigger stage) at the 2010 show there (QRO photos), but that was in June ’10. “Friends with benefits” from Reptar came out on horns for final song, “Ambling Alp”. 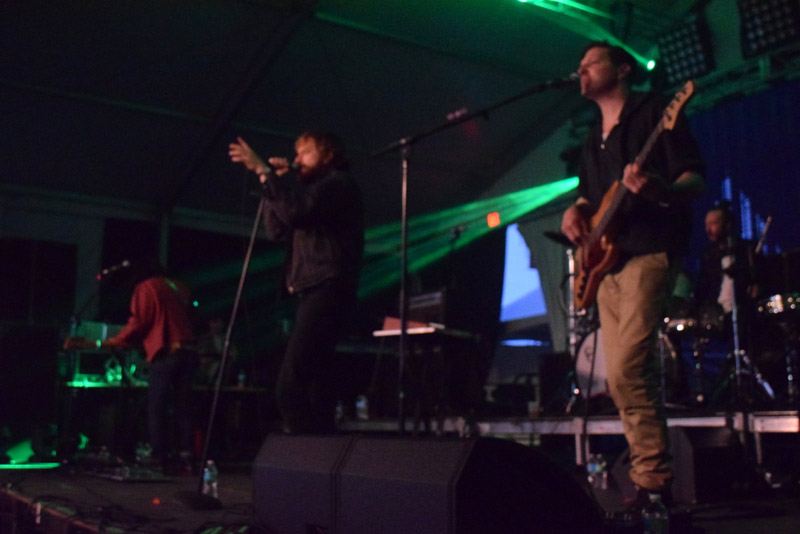 The biggest alt-act at Escape ’14 was Placebo. Admittedly, the band has long been bigger in their native Britain than over here, across the pond, but they had the biggest crowd of the entire festival as they came behind this year’s Loud Like Love (QRO review), one of the few bands playing Escape behind a specific, recent record (Yeasayer, by contrast, mentioned that they were working on a new record, as did Sunday’s The Joy Formidable). 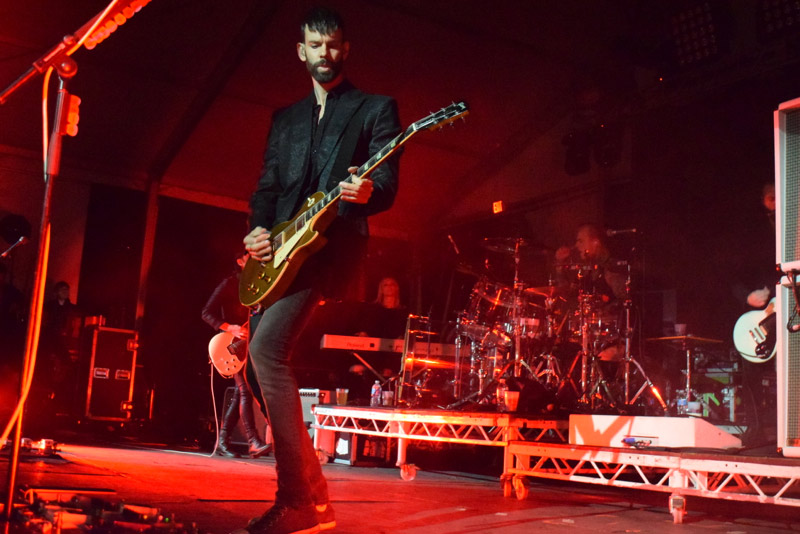 The indie kids did leave after Placebo, as closing out the night was just a DJ set from Moby. But if you’re gonna have a DJ set, make it a Moby one, as the musician knows his stuff. After taking over from an overconfident between-song DJ, the bald man in glasses was definitely into it – maybe even more so than his ‘regular’ gigs. 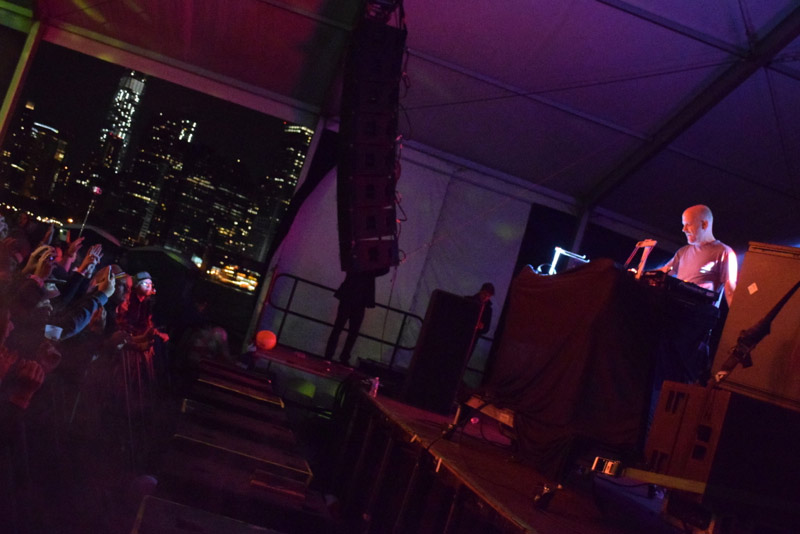 [note: QRO had our own technical problems, leading to a limited photo gallery, especially on Saturday. It didn’t help that security shrunk the photo pit to one corner in the middle of Saturday, and then made it basically inaccessible on Sunday…] 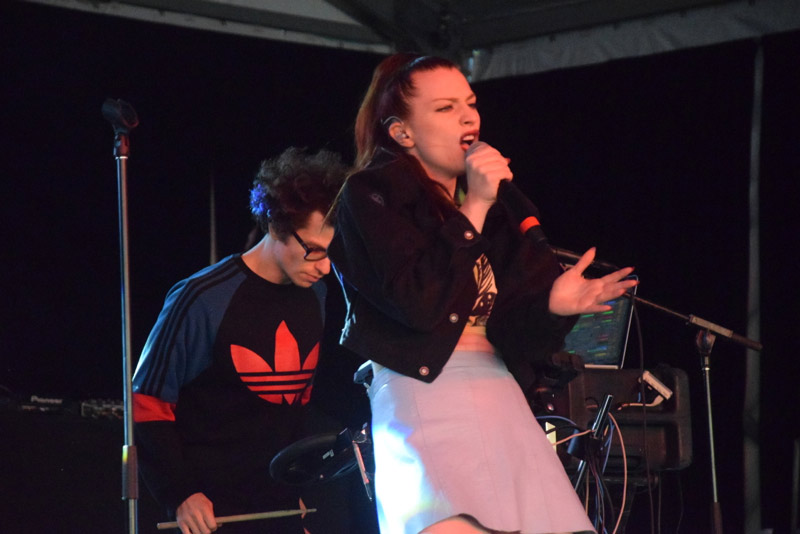 Sunday was thankfully much sunnier, but it couldn’t really warm up, right there on the faux beach (complete with sand pit and fake palm trees). There was also more competition during the day, as many were at the free Times Square show from the CBGB festival. But electro-pop duo ASTR had a very special fan, singer Zoe Silverman’s mom, seeing them for the first time, “Buy her drinks!” 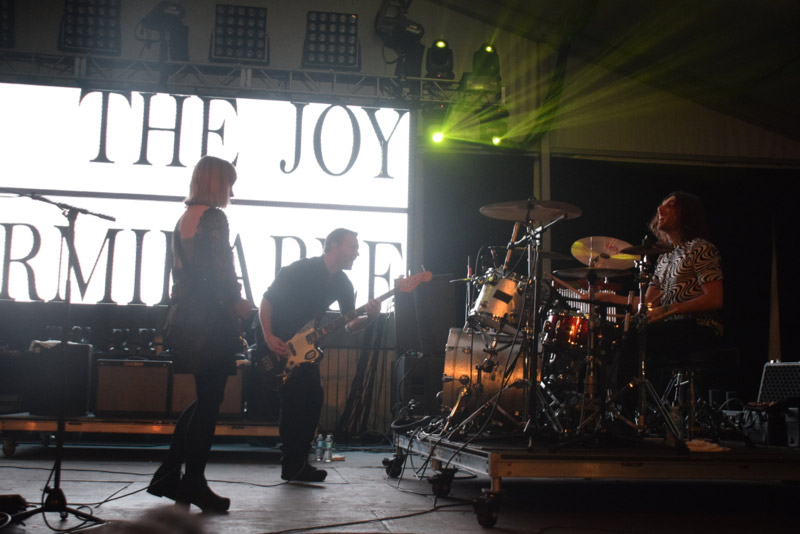 In the middle of making their next record, Wales’ The Joy Formidable still brought it for this one-off appearance. Yes, they played their ‘big hits’ like “Everchanging Spectrum of a Lie” and “This Ladder Is Ours”, but also did one of their Welsh language songs (surprisingly, the Welsh regional government didn’t give any state support to the artistic endeavour – where’s Plaid Cymru when you need them?…). What’s more, they delivered Escape’s high point when, after singer/guitarist Ritzy Bryan remarked that, “acoustic sounds shit through PAs,” headed into the crowd to play wholly acoustic with bassist Rhydian Dafydd (QRO interview). It was kind of hard to hear, but took advantage of the relatively smaller crowd to give a special, intimate moment. 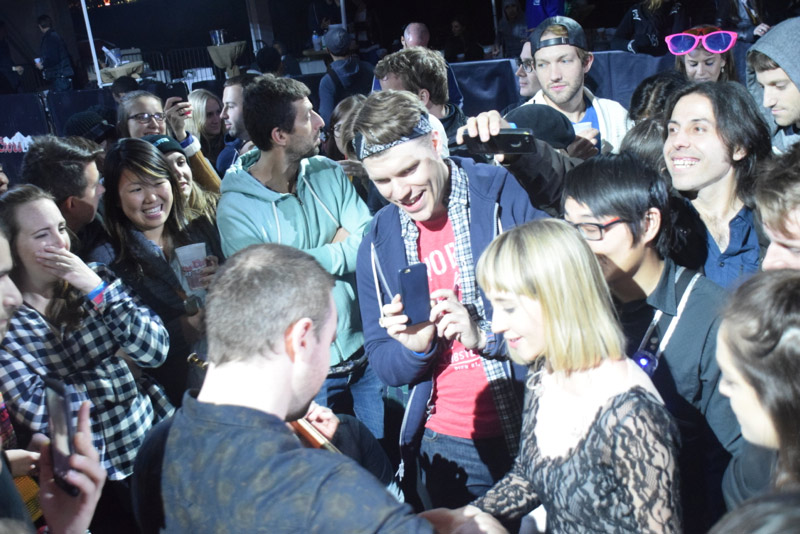 Escape closed by keeping it up with Mayer Hawthorne and the irrepressible Girl Talk, not to mention a video of ‘urban skiing’ from main sponsor My Life (a pretty cool video, if randomly interspersed with shots of a bathing beauty). 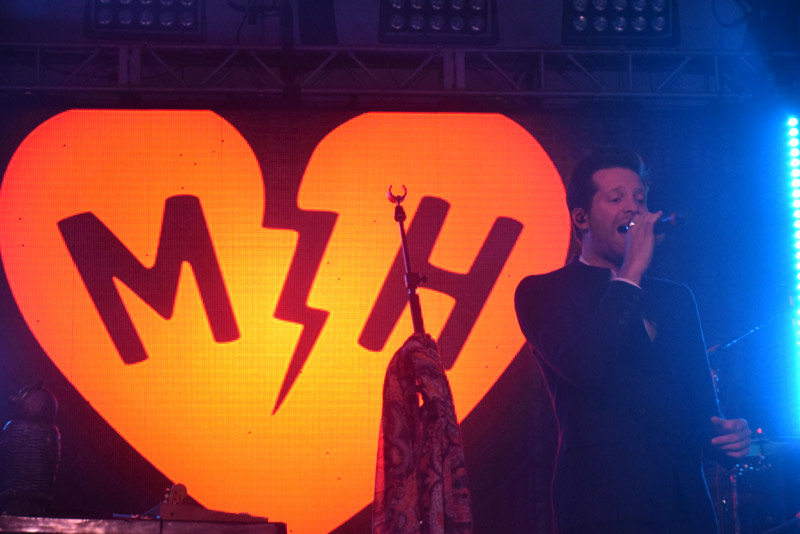 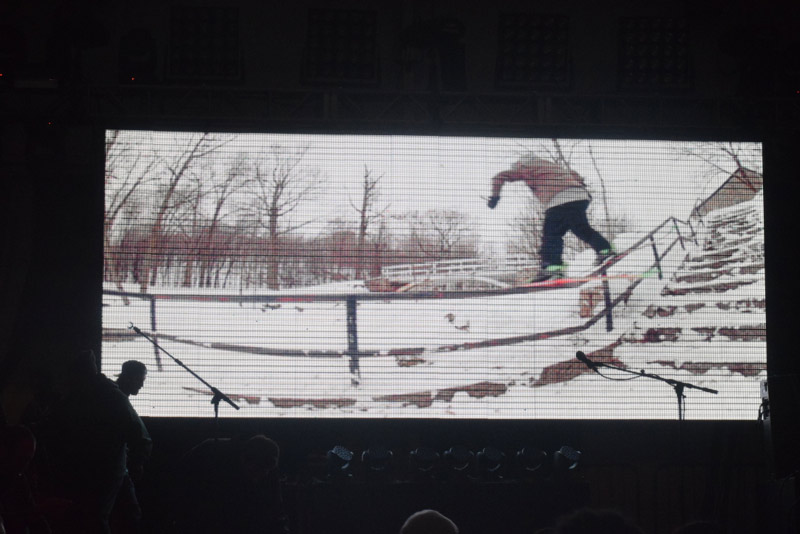 No, Escape Music Festival didn’t go off without a hitch, and if it comes back, it really needs to move location & time of year, not to mention more successfully integrate the two musical genres. But one can’t fault for ambition, or the acts for delivering. 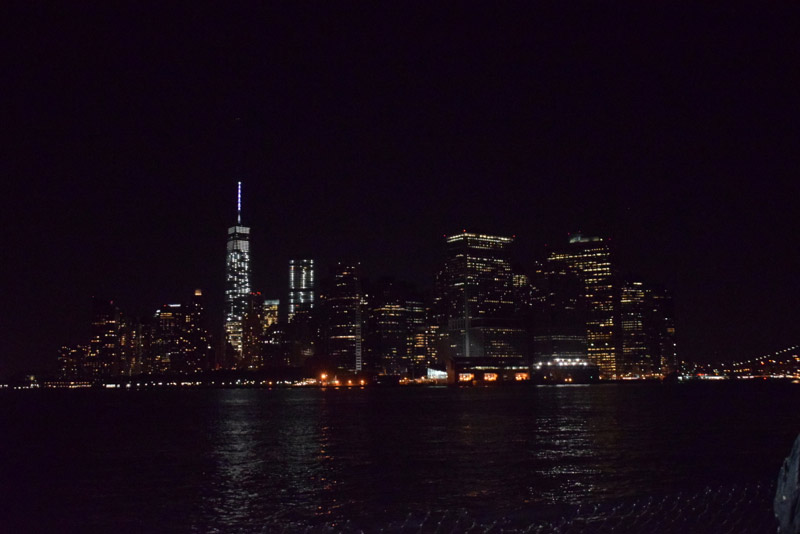