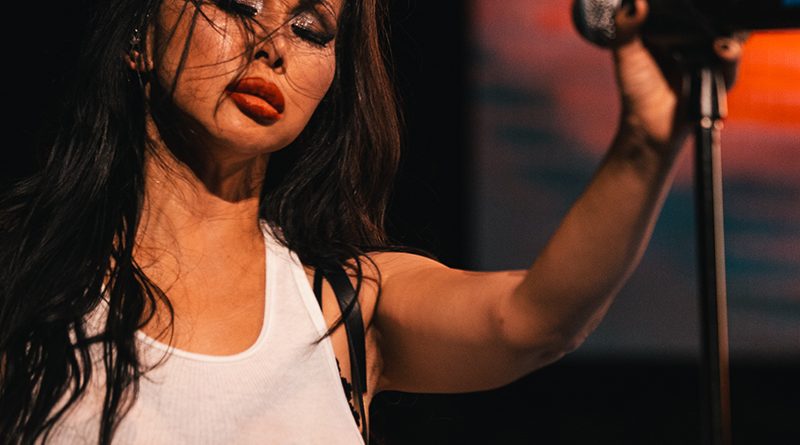 QRO: How have you been holding up these last two-plus years?

Etty Farrell: The pandemic was certainly hard on everyone. On the flip side, I try to look for the silver lining and Perry and I got to spend more time with our kids and each other. We got to work on new music and plan for the launch of Perry’s Imprint Label and my single “He’s a Rebel.”

We certainly missed performing and being with our fans but always had hope that things would get better.

QRO: It was great that Lollapalooza was able to happen in 2021 (QRO recap), and in its regularly scheduled time of the year, no less. Was that particularly hard to pull off?

ET: We were the first major festival back so it was exciting but it was also a test and a lot of pressure to plan. We did everything we could to put in all the right precautions and it ended up being a huge success. We believe it really opened the door for other live music festivals to return. Of course, this year, it was nice to be back to a full scale festival and really spend time with other artists and the audience.

QRO: And now Lollapalooza’s expanding to India! There are Latin American & European versions of Lollapalooza, but this will be the first in Asia. How has Lollapalooza India come about?

ET: The expansion to Mumbai has been in the works at least three years; it started before covid happened and of course the pandemic delayed the process. It was a long, long process. India is a great place to break into Asian audiences. It is a big enough country to sustain a Lolla festival without needing international travel. Our goal is to show both Indian and Western acts – likely 60 % Indian acts and 40% Western or international acts.

It will be great to work culturally with the local artists. We see Mumbai as a first city into Asia, a gateway to expand Lollapalooza there.

We see Mumbai as a first city into Asia, a gateway to expand Lollapalooza there.

QRO: And how do you go about getting ‘local’ acts at overseas editions, when perhaps you’re not as familiar with the artists in India, or Chile, or Sweden, etc.?

ET: When we work overseas we make great effort to bring in culturally relevant and local artists. We do a lot of research and rely on recommendations from other artists we trust.

It would also be great to bring some of those artists to Chicago and other Lollapaloozas, like an International Stage. We are a global brand and have the capacity to do that.

ET: Yes, ten more years in Grant Park! We built something together with Lollapalooza and we consider Chicago our family and home town as well. We could not be more excited about the extension news.

QRO: And speaking of new ventures, what brought about the new Imprint Label?

ET: Imprint is different because there is Perry and he is so involved! It is wonderful to have an artist that has done it and gone through it themselves, that knows the process, not just as an artist but as a producer and promoter. When you have a record label run by an artist there is always that love and care that you might not otherwise get. Also, with Perry being the founder of Lollapalooza, there is that opportunity to then promote these new artists. It’s been in the works for a few years. Perry and I talked a lot about it during the pandemic, and it finally came to fruition. Perry said it best when he announced the label…

QRO: Why start with the Pink Panda remix of your cover of The Crystal’s “He’s a Rebel”?

ET: It was so fun to work with Pink Panda on this remix, and I’m moving more and more into the dance music space. I had released the single earlier this year and the remix just felt like the right fit to launch with Imprint. It’s gone viral and we are so happy it’s been well received.

QRO: And Imprint will be putting out Victor Ruiz & Tim Green remixes of your “Mend”?

ET: Yes, so look out for those!

QRO: How was co-writing “Mend” with the late Taylor Hawkins?

ET: Taylor was family to Perry and I and we miss him every day. We cherish having that time with him. He was such a phenomenal artist and human being.

QRO: And Imprint is connected to the new ‘Heaven After Dark’ event series?

ET: Yes it is. Perry describes the new label best!

“The feeling of finally having my own label is similar to receiving a pilot’s license, and being able to fly your own plane to anywhere in the world. We all can sense that the music industry is heading in the wrong direction. We know that the labels take most of the money, now with music streaming services. Artists are left struggling and forced in desperation to focus on numbers instead of their cherished art form. We wanted to found a culture which allows for maximum creativity. A sort of heaven for listeners. I am able to release song and sound unbridled. Collaborate with and support artists that I respect as well. There are many similarities in attitude with Heaven After Dark, to what we did in 1991 when we launched Lollapalooza.”

ET: It’s been such a unique experience to all be back together after so much time. As they say with true friends and family, it is like no time has past.

QRO: And now there’s word of new music being made?…

ET: You’ll have to stay tuned but we have some exciting things coming.

QRO: And speaking of tours, how did Jane’s Addition tour with The Smashing Pumpkins this fall come about?

ET: This is something we’ve wanted to do for a while so when the opportunity arose it was an easy thing to say yes. We cannot wait to tour with The Smashing Pumpkins to so many great cities across the country and Canada.

ET: Yes and it will be exciting to finish in our hometown at The Hollywood Bowl just before the Thanksgiving holidays.

QRO: And there will be a Kind Heaven Orchestra show in Los Angeles on December 10th?

ET: It’s also my birthday! So it will be an extra special show.

Ambrose Kenny-Smith of The Murlocs

The National – Live at Capitol Theatre