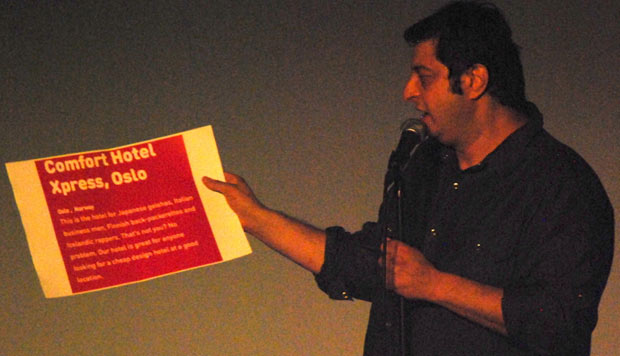 Click here for photos of Eugene Mirman & Friends at Guggenheim on September 25th, 2009 in the QRO Concert Photo Gallery

“We did it!  Put on a bunch of shows – at a place convenient to me…”  So began alternative comedy pioneer & major figure Eugene Mirman opened up the first night of his annual ‘Eugene Mirman Comedy Festival’.  Celebrating its fifth year, the festival ran Thursday-Sunday, September 13th to 16th, at sister venues Bell House (QRO venue review) and Union Hall (QRO venue review) in Mirman’s own Park Slope, and included its regular ‘Star Talk’ with high-profile astrophysicist Neil DeGrasse Tyson on Friday, ‘Uh Oh: Dangerous, Inappropriate Comedy For Teenagers’ on Saturday afternoon, and a film festival on Sunday.  But Night One was ‘We Appreciate Ourselves: The Five Year Anniversary Celebration’, with stand-up comedy from Todd Barry, Jim Gaffigan, Jon Glaser, John Mulaney, Sarah Silverman, and Mirman himself.

In addition to introducing each comic (and more – see Glaser below), Mirman began the night with his own routine.  Working off notes but still engaging, Mirman told stories about meeting a stripper who told him, “You don’t know how many times I’ve manually pleasured myself thinking about interviewing you,” to Norwegian horse welfare.  Given that it’s his festival, and that he’d be appearing at multiple nights (and fans would be at multiple nights), Mirman could have been forgiven for delivering little of his own material, but he’d actually meant to do more – later in his routine, long after the stripper story, he realized that he’d missed something he meant to include in that.  So there’s a variation he could still do next time at the mike. 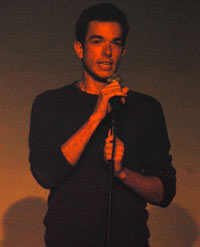 Other than the first-up host, multiple-comedian nights of stand-up roughly hew to music’s ‘opener-headliner’ line of increasing draw with each act, so the youngest performer was also the ostensible first, John Mulaney.  Mulaney actually played on his relative youth (he admitted to being thirty) by starting off on telling how he realized that he was old when he watched the kids on Veronica Mars try to decide which college they’ll go to, and momentarily wondering where he’ll go to college.  He then went into describing the difference between all the rights children have now versus when he was a kid – not to mention now they’ve got the Cartoon Network, twenty-four hours of cartoons, versus the two hours during the day during his childhood that you had to catch, ‘cause afterwards was Donahue.  The high point was retelling how his father responded to John & his three siblings chanting for McDonalds when they saw it on the road, for their father to pull into the drive-thru – and get only a black coffee.  It was impressive that he could make his whole set revolve around a single topic (if a large one), almost like an extended, excellent version of a Craig Ferguson opening monologue on The Late Late Show, minus the talking gay skeleton robot or creepy Secretariat.  Mulaney might have been at least a bit younger & less well known than the other comics that night, but he’s nicely following in their tradition. 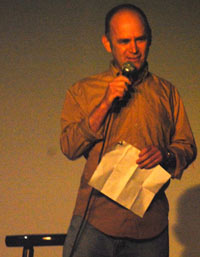 After a one-minute video Mirman made of him using spy video-glasses (which even he admitted afterwards was less than impressive), he introduced a “New York City hero”, Todd Barry.  Barry might be the most ubiquitous presence in the New York comedy scene, so instead of a regular routine he read from – and interject comments on – an article in Esquire called ‘How To Feel Good To a Woman’.  Not only did riff on the obvious inanities of advice like “Have more towels than I’ll need” (“She needs more towels than she needs”) or “Smell like something all the time” (“Seems easy enough…”), but also on how the writer thought that men thought, such as the ‘serendipity’ of going to “A friend’s basement to watch the game and cold beer & hot wings are just within arm’s reach.”  And there were just mock-statements from the article like, “Hands are a Goldilocks dilemma.”  Admittedly, Barry didn’t give the crowd his full-on stand-up routine, but few comedians are as excellent at interjecting even obvious comments, to the point of repetition, and making it funny as Todd Barry. 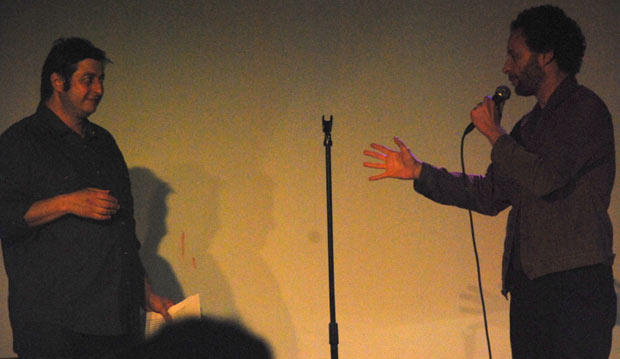 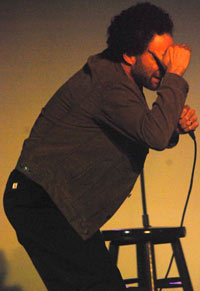 After Mirman introduced Jon Glaser, the star & creator of Adult Swim’s Delocated (and was also the “Pubes” guy on the old Late Night with Conan O’Brien) out came not Glazer but a backstage assistant with a few pieces of paper and a Subway sub (“He looks different…”).  Glaser had sent a multi-page note in apology for being sick and not being able to make it there – and had sent a six-foot long party sub that he really hoped the Subway guy didn’t screw up and just make a foot-long.  Mirman proceeded to read Glaser’s hilarious letter, which was basically a meta-comedy piece in itself (such as Mirman reading Glaser saying the crowd would be a-holes if they hadn’t clapped long enough after he read Glaser’s announcement of formally adopting a baby girl that day), as well as intentional dead horse-beating jokes such as coming up with new lyrics for Jay-Z’s “99 Problems” now that the rapper said he’s no longer going to use the word “bitch” (to the point where the entire crowd knew which word that rhymes with ‘bitch’ was coming up).  The letter was done rather stream-of-conscious (Glaser told the crowd to wait a minute while he Googled something), but he did “treat the audience to one of my patented zingers – or ‘glingers’ as the true fans call them,” wherein he had Mirman go to the front of the stage, find someone who looked like he was either Jewish or an asshole (“It’ll work either way”), and then say, “Look at this guy – he’s either Jewish or a complete asshole!”  The letter closed by Glaser having Mirman read insults at the crowd – and read Glaser saying that he didn’t write that, and it was “all Eugene.”

And then Glaser actually did show up, saying he felt guilty for missing the set and had hoped to get there before Mirman had read the letter, but no such luck.  He chastised Mirman for all of those insults he’d heaped upon the crowd, and then gave one of his “trademark glingers,” “Look at this guy – he’s either Jewish or a complete asshole!”  Then Glaser got the (non-existent) light telling him to wrap up, and exited.  With the rest of the night being ‘traditional’ stand-up (at least by Eugene Mirman Comedy Festival standards), Glaser’s piece was not only hilarious but also a great change of pace – and heightened by Mirman laughing and stammering as he read Glaser’s letter. 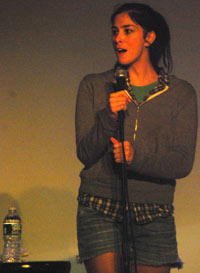 Another change of pace was the following Sarah Silverman.  Not only the sole female on stage that night (not counting the assistant who handed Mirman Glaser’s letter & gift sub), she was also probably the biggest ‘star’, thanks to all of her work in movies and on television.  Her stand-up material was also the ‘edgiest’ of the night, which did lead to some awkward moments (and not just when she called out a guy in the crowd right in front of her for texting during her bit – “But I’m not good at crowd work…”).  It wasn’t the left-leaning political material (the crowd was very blue state), or even the racial stuff (“It’s staggering to think that, every thirty seconds in this country… I say something racist”) that caused a bit of unease, but the sexual stuff.  Let’s see, there was sperm in hooker’s assholes, “Who here has herpes?”, and a long riff on rape jokes.  Seemingly a sort of comedic commentary on Daniel Tosh (of Tosh.0) getting in trouble for making his own meta-jokes about how even rape can be funny (and, when told it wasn’t by someone at a show, Tosh ‘joked’ that it would funny if that woman just then got raped, or something…), it was admittedly way less offensive coming from a woman than a man (doubly so a ‘bro comic’ like Tosh), and she never joked about someone in the audience getting raped – but did say how awful she would feel if a rape victim came up to her after the show and told her, “I thought that joke was insensitive, and inappropriate, and totally my fault, and I’m so sorry…” (“They’re not big complainers…”).  However, mostly it a riff on the idea of ‘rape comedy’ and it being ‘edgy’.  Maybe the best balance was, “Obviously, I don’t think women are ‘asking’ to be raped – I think some women are asking to be motorboated…” 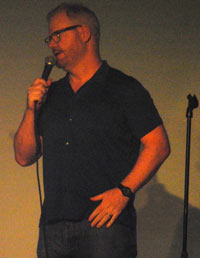 The first night of the Eugene Mirman Comedy Festival had a bill that included a ‘special guest star from L.A.’ (Todd Barry had joked that it was him).  Mirman introduced the special guest as someone “On TV a lot – and the internet…  Narrowing it down yet?  Very light-skinned” – Jim Gaffigan, who immediately joked that everyone was hoping it would be Louis C.K.  Gaffigan has hit it pretty big the last couple of years (big enough to move to L.A., apparently), and it was easy to see why.  His commentary on everyday life is peppered with his impression of a member of the crowd commenting negatively, or at least confused, about what Gaffigan just said, in an audible whisper.  Gaffigan took down people who take baths (including “some good bath-acting”), shampoo, conditioner (“Always identical bottles, for no other reason than to confuse us…”), and other shower “goos” like body-wash (“And yet we all still look like crap…”) and anti-aging cream (“There is something that stops aging – it’s called death”).  His material was a decided change from Silverman, so domestic when he talked about his upcoming fifth kid, or even how we all only reach out to God when we’re in big trouble like cancer, and how annoying it must be (“A joke with cancer and religion – always a good idea…”).  Even his cancer jokes turned into a joke about him having the zodiac sign of Cancer.

The ‘alternative comedy’ scene has blown up in recent years, thanks to the success of people like Patton Oswalt and Zach Galifianakis (especially their ‘Comedians of Comedy’ tours, which took stand-up out of the traditional night clubs and into rock venues like Bell House or Union Hall), and like seemingly everything else alt-, it’s based in Brooklyn.  Eugene Mirman has not only been a mainstay (including replacing Galifianakis in ‘Comedians of Comedy’ tour), but has helped keep it dispersing to the winds as some comics get sit-coms and others struggle to make ends meet.  So here’s to a sixth year and more of shows at a place convenient to him…