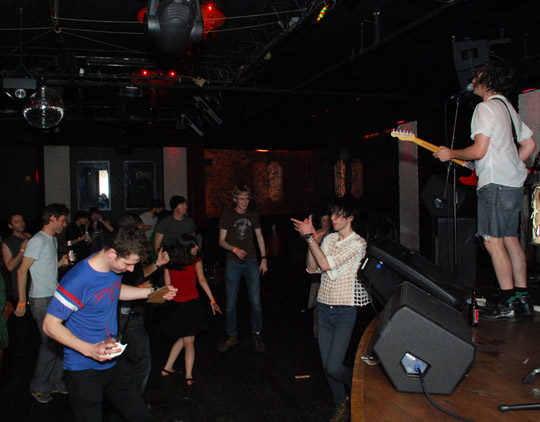 Europa is located on 98 Meserole Ave., Brooklyn, between Manhattan Avenue and Lorimer Street.  It is in the same Greenpoint area as the late Studio B, to the north of Williamsburg venues such as Music Hall in Williamsburg, Public Assembly, and Williamsburg Waterfront.  Europa has also recently begun booking events at Brooklyn Masonic Temple.  It lies right next to a police station, on Lorimer & Meserole.

Europa is actually two venues, an upstairs and ground level downstairs.  The downstairs is a small platform stage, bar, and alcove; the much larger upstairs is the main venue.  Rather plush, upstairs at Europa looks more like a nightclub, with dark-colored cushion-seat/benches along the ways, separated by chainmail-looking curtains.  The stage is in the far corner, but spreading across the corner; raised about four feet, with the stage floor in the middle, the stage is visible from the surrounding seated areas.

While the similarly dance club-looking Studio B stuck mostly to dance music and events, Europa focuses almost exclusively on hard rock, heavy metal, wild shows, and the like.  It almost has the feel of being a ‘Long Island club’ like Crazy Donkey, ‘hard rock’ for the truly bridge-and-tunnel crowd – even Meserole outside feels like the Long Island version of Williamsburg’s Bedford Avenue (it’s also a hike to any subway but the non-Manhattan G).  If you’re not into that kind of music, not a regular or even ever haunt, but if you are, a good place to see it.

-Japanther, with The Pharmacy, May 7th, 2008 (upstairs) – Japanther photos, The Pharmacy photos 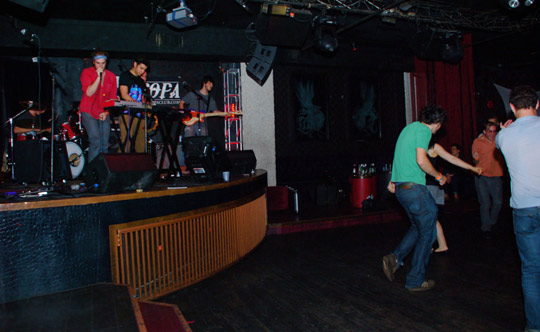