Punk’s not dead, and it was proved to full effect and more in the most unusual of places.  Seminal eighties punk rock act the Circle Jerks converted their annual Fuck Yeah Fest in Los Angeles into the F Yeah Tour (QRO Festival/Tour Guide), taking a whole host of acts on a vegetable oil-powered bus with them as they crossed the country.  And they finished up in New York City on the weekend of July 12th-13th with three shows, including a Todd P Brooklyn party (QRO concert listing) on Sunday, a late-night loft party on Saturday (QRO concert listing), and an early show before that in the last place you’d expect, Manhattan’s Highline Ballroom.

Highline Ballroom (QRO venue review) looks like an ultra-classy place, with excellent sound system and especially light show, expensive drinks (and no tap beers – or water), heavy-handed security in suits, etc.  Yet the new venue is perhaps the most schizophrenic of all of New York’s concert halls, hosting everything from seated singer/songwriter shows (like Bob Mould – QRO live review – and The Eels – QRO live review) to indie-rockers like stellastarr* (QRO live review) to disco-dancetronic acts like VHS or Beta (QRO photos).  Yet it was still a major surprise when the ultra-DIY F Yeah Tour booked Highline, with people from the bands to the bartenders perplexed.  There were, of course, problems, starting with the band’s bus breaking down and virtually everyone missing soundcheck.  There was also a specific time limit, forcing every one of the five bands to shorten their sets.  Punks of all ages were upset over the high cost of anything to drink (many, many asked for a glass of tap water at the bar, only to be told there was only bottled water for purchase – a few wisely reused plastic beer cups to get water from the bathroom).  Yet it wasn’t as much of a mismatch as it could have been, with the punk energy and ethos still there, and the bands mostly policed their own fans, letting the security play it lighter than one might have expected (though, in one case, it all came a little too late…). 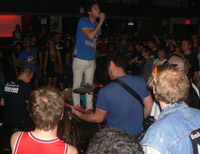 While the early-arrivers waited, comedian Hannibal Buress delivered a great stand-up set from virtually among the audience, and he didn’t tone it down for the all-ages show, or temper his material for fairly lily-white crowd (the African-American comedian even joked about the lack of black punk rock bands – with which someone naturally gave the stock-answer, Bad Brains).  Opening band Team Robespierre played an energetic set right there on the stage floor.  They weren’t afraid of the crowd, in fact inviting them to get closer, saying, “There’s no rules allowed at Highline Ballroom – 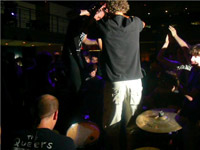 except beers are like ten dollars, I’m sure…”  By the time they finished with “Bad Habits” (one of many pieces played from their debut release from earlier this year, Everything’s Perfect), the audience was so close someone was literally standing on the bass drum (see right).  Unfortunately, the late arrival meant the band only played for about eleven minutes, but those were an action-packed eleven minutes, nicely balancing punk rock energy with a DIY Brooklyn indie-rock friendliness. 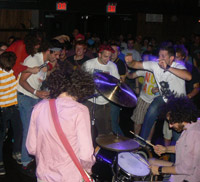 Israeli extreme punks Monotonix only played for about as long (or rather, as short) as Robespierre, but they certainly made an impression – not with their garage noise, but with their crazed antics.  Playing on the floor like Robespierre, this Tel Aviv three-piece started things off with the bearded, wild-eyed singer running around amid the crowd, crashing into his own white-afroed guitarist, and eventually stealing pieces of the drummer’s kit.  Acts from him included putting the bass drum on top of one of the bars (wherein the guitarist climbed up on top of the bar with it, beating the foot pedal while playing – QRO photo), climbing up to the balcony railing and

jumping off (after a crowd had formed to catch him – see right), putting one of the trash cans on top of his drummer while he was playing, jumping in that same trash can after it was shaken off.  The crowd lifted the drummer (on top of his bass drum), his snare, and his high-hat up in the very original ‘drummer crowd surfing’ (with which the singer joined him atop the crowd – see below right), and it all ended by packing as many people into the foyer as possible (the singer pushing to squeeze them in – QRO photo).  While there were a few dopey 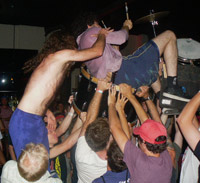 folks trying to slam dance (and at least one fan who took the opportunity to join in on drums, for really too long), it was remarkably easy to avoid getting physically involved in the activity, and just stand back and appreciate it.  What they sound like on their debut EP, Body Language (out later this year), is anyone’s guess, but while Team Robespierre really left you wanting more, Monotonix’s short set really gave you their whole experience.

Local heroes that are blowing up Matt & Kim 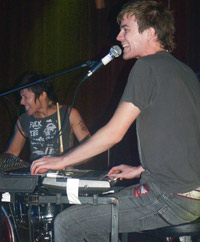 (QRO spotlight) graced the actual stage (albeit right up at its lip) next.  The drums-and-keys duo have all the energy of any punk rock band, but put it into bringing a good time to all.  They’d left the F Yeah Tour to go on their own mini-tour (QRO photos), before rejoining for the final two dates in their hometown.  Like Team Robespierre & Monotonix, their set-time was brief (though, at about twenty-two minutes, it was about equal to the sum of Robespierre’s + Monotonix’s), with the ever-chatty Matt Johnson (QRO interview – with Kim Schifino) having to keep himself in check, for the sake of wanting “as much Dillinger Four” as possible.  They mixed up established tunes with a few new ones off their ever-upcoming new album, as well as throwing in a few instrumentals – including “Cinders”, played “twice as fast as we’ve ever played it.”  Johnson admitted he could play all night, “but some nights aren’t like that,” and they still brought things to a climax with staple finisher “Silver Tiles”.

See also them playing two instrumentals, including “Cinders” in double-time 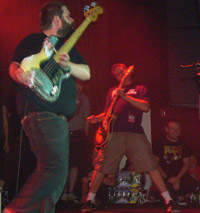 And Matt was right when it came to Dillinger Four.  Proving that, when it comes to punk rock, Minneapolis can do no wrong, Dillinger Four nicely straddled the inspired punk of eighties and early nineties with the more teen-punk of the late nineties through now.  But what was most impressive was bassist and pseudo-frontman Patrick ‘St. Paddy’ Costello, whose humorous stage presence puts him up there with the likes of Electric Six’s Dick Valentine (QRO interview) and Art Brut’s Eddie Argos (QRO interview).  During the band’s roughly twenty-six minutes on stage, he joked about everything from coke heads to baby Jesus to stealing from your boss, but his best was his running gag about wanting to become famous and “leaving this punk DIY shit behind” – and imploring New York, i.e. the ‘guy from the major label’, i.e. the one man in a suit on the stage, i.e. a Highline Ballroom bouncer, to make it happen (even the oh-so-serious security man had to laugh – QRO photo).  With their latest, C I V I L W A R, coming out this year, one can only hope that they can live the dream… 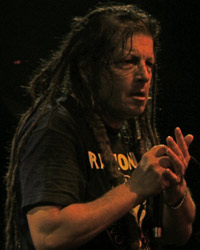 Headlining the F Yeah Tour was the organizers of Los Angeles’ original F Yeah Fest, veteran eighties punks the Circle Jerks.  The only band to play a ‘full’ forty-five minutes, they made every second count with some old-school, still-do-it-best punk rock.  Aging, but still dreadlocked singer Keith Morris joked about the fancy setting, saying how, when they started, there was no such thing as monitors (and asking, “Don’t give the bouncers any reason to be… well, bouncers”).  There was a massive amount of energy from the crowd, with fans continually running on stage and diving off–

And this is where your correspondent has to cut into his coverage, because during the set, some asshole stage-dived straight into my face…  It was all the way over at one

corner, where no one was crowd-surfing, and some idiot ran from one side to the other, leaning over in a tilt of gravity, not jumping up to be caught but rather literally diving down from the stage, putting a mohawked skull right into the bridge of my nose, causing a massive nosebleed (and this was right after someone standing beside said, “I didn’t know anyone stage-dived anymore…”).  The bleeding stopped by the end of the set, and that seemed to be the worst that happened to anyone (there was a cut lip, but when Sick Of It All played Highline, someone broke an ankle, and the kids afterwards took the barriers outside and tossed them on top of nearby cars).  Closing the barn door after the horse had fled (or perhaps in response to what had happened), Morris did eventually ask good-naturedly for a ‘weight limit’ on “portly punk-rock gentlemen” stage-divers (about 190 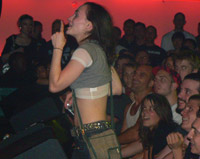 lbs.).  The band’s own security-cum-roadies kept a more-and-more watchful eye on those who climbed onto the stage, making sure they got off fast, and the divers ultimately shrank to a few lighter regulars, especially two skinny girls, one of whom seemed to spend more time crouched on stage than off by the end (see right).  Was it worth it to see Morris, the original singer of ultimate eighties punk rock act Black Flag, belt out Flag’s “Depression”, “Gimmie Gimmie Gimmie”, and others?  Ask again when the swelling dies down…

See also them playing “Wild in the Streets”

That ending aside, the F Yeah Tour was an exciting and certainly energetic reminder of what punk rock is.  It may not have evolved a great deal from the early days of the Circle Jerks, but young Brooklyn acts like Matt & Kim and Team Robespierre are proving it’s still vital, while Dillinger Four are proving it’s still lasting, and Monotonix are proving it can still shock.  And punk can do so in any setting…