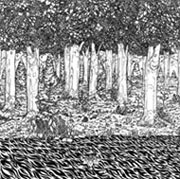 Americana has always had a bit of an uneasy place in indie-dom, not just because of the knee-jerk liberal anti-patriotism of the scene, but because it can too easily slip into easy listening pop-folk (or, horror of horrors, new country…).  But 9/11 and the various wars the U.S. has been involved in since have not only lessened the anti-Americanism of the still-left-of-center alternative music world, but indeed opened the doors for Americana.  Various acts, big and small, have walked through, but one who’s definitely upped their game is Family of the Year, with their charming new EP, Through the Trees.

The California six-piece were always ‘independent’, in the sense that they released their material on their own (and Trees is no different), but last year’s debut full-length Songbook was just some relatively simplistic male-female duet pop-folk.  With the new EP, the XX-XY dual vocals of singers Joe Keefe & Meredith Sheldon are still there, but Family of the Year have significantly improved elsewise, especially in rhythm.  The pace is what lifts opener Hero from straight alt-folk strip, and even gets somewhat indietronic with middle piece, "The Barn".

Family of the Year aren’t the first act to combine the two burgeoning strains of Americana & indietronica, and the bright, wistful male/female strum of "Chugjug" is reminiscent of such outfits (like Savoir Adore – QRO live review – and The Seedy Seeds – QRO album review).  But the band is definitely on the native side of things: "The Princess & The Pea" is nice, if a bit run-of-the-mill, but closer "Stairs" lifts Through the Trees to its greatest heights, an Americana procession with an absolutely catchy chorus (if sung a few too many times).  Bipartisanship may not be working on the political scene, but is in the indie scene.