Fat History Month seems to be continuously touring and recording since their first single, “Safe and Sound” on Bedroom Suck Records.  Between shows in Boston and New York they... 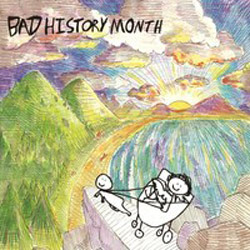 Fat History Month seems to be continuously touring and recording since their first single, “Safe and Sound” on Bedroom Suck Records.  Between shows in Boston and New York they seem to be perpetually in the middle of a northeast tour.  They’ve released countless cassettes and singles to date and the duo of Jeff Meff on vocals/guitar and Bob Hobby on drums have just put the finishing touches on their sophomore full length Bad History Month, a joint release from Sophomore Lounge and Exploding in Sound Records.

The title track and single “Bad History Month” continues where their previous full length, Fucking Despair left off.  Barely audible, gently brushed guitar to the snap of metal strings, feathery high hat vibrations to pounding smack snare hits, these are the extremes in Bad History Month’s dynamics within the first few measures.  They constantly set up an expectation of collapse with off kilter rhythms that can’t possibly remain perched on the edge of this timing.  The reverb is a surf variety of echo but that’s the only effect in this stripped down setup.  These two almost counterintuitively keep things minimal, the highs and lows are executed with the utmost precision of bursts.  Meff sings in Issac Brock’s style of deadpan empathy, layering in a higher register yell, flickering guitar strings while Hobby matches every heavy step, twitching with fills.  They aren’t after the arrangement of notes but rhythm and volume.  They create the calmest of seas that turn in an instant, swallowing the tiny melody whole.  As fast as it blew in, the track fades out.  They’ve been known to take their brand of post rock to incredibly complex places, investigating untested math equations and exotic time signatures, but when they rise to an epic peak, you’ll forget all of these details.

Beginning March 22nd and leaving from The Middle East Upstairs in Boston, Fat History Month embark on a national two month tour in support of “Bad History Month” along with with labelmates Pile.  The two bands travel through the center of the country, out west to California, across the southern states and back up the east coast to end where it all began around the end of April.  The vinyl album is out in an edition of 500 with a 20+ page illustrated lyric sheet the beginning of April.