<img src="http://www.qromag.com/wp-content/uploads/2012/05/fathistorymonthapr16.jpg" alt="Fat History Month : Live" />For all of the delicate intricacies and complex instrumentation of <i>Fucking Despair</i>, you'd be surprised to catch the duo live with... 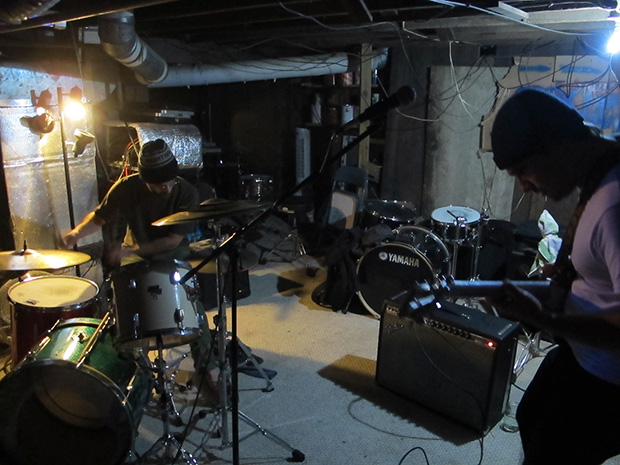 For all of the delicate intricacies and complex instrumentation of Fat History Month’s Fucking Despair on Sophomore Lounge Records you’d be surprised to catch the Boston duo live with nothing more than a stripped down drum kit without a loop or delay pedal anywhere in sight.

This is due to Sean History Month’s ability to put his guitar through it’s paces nightly, able to step out of the van, load in a couple essential pieces of a drum kit and turn on a single battered amp, Fat History Month thrives on their bare bones setup.  Their ability to recreate the ebbs and flows of their math-punk comes from the telepathic mind-meld of a duo, those imperceptible nods or long stares to signal the next big change or abrupt silence.  On stage, it’s an extension of the closeness that comes from miles of travel, a unique kind of codependence to know when that wall of chaos is about to start.

As usual, that’s how they found themselves in the middle of another heavy equation Monday night, April 16th, on the checkered linoleum floor of Brooklyn’s Death by Audio (QRO venue review).  Sean played in a loose fingerpicking style or palmed strumming bursts, emphasizing particular timing shifts, jerking backwards into another band’s gear on the side of the stage.  Leaning into the mic, his vocals shifted as dynamically loud and quiet as the instrumentation.  Mark on drums was bashing on a spiral cut crash cymbal or tapping out subdued jazz timings on a high hat missing chunks off the edges.  Lyrically, Fat History Month explores mundane or downright silly semi-narratives with titles like "Old Lady Smokers" or a new unnamed track about the night roaming of a house cat who ends up under a car tire, and weaves them into abstract epic roller-coasters bursting with the punk energy of Slint or the quiet spaces between notes of Jim O’Rourke.

The real trick is how they make these constantly changing melodies feel loose and improvised.  As much as this math rock genre strives for the perfect stop or impossible time signature combinations, the way they keep the spontaneity live without sounding like they’ve ever lost direction is a delicate balance.  They focus on the central melody and out of control hardcore energy instead of obsessing on the minutiae.  The bigger picture then becomes a mix of soaring bizarre chords and Sean’s vocal coming across with the same reckless abandon as the best parts of Lonesome Crowded West, but any indie ‘90s reference seems to do them a disservice.  There’s such a punk feel to the performance going all the way back to the Cap’n Jazz’s Tim Kinsella’s hoarse vocal with a similar abstract angst aesthetic.  Live, it becomes the contradiction of a single-minded vision from the duo… going way down their own idiosyncratic road.

The perfection and heavy silence captured on Fucking Despair is traded for a more violent free-form rock, and it’s in this translation live that makes them a truly great band.  Completely different than their obsessive recordings, the rolling loops and fret gymnastics are faithfully duplicated but the overwhelming volume and energy they bring to an audience can’t be captured in the studio either.

That’s the kind of hybrid they’ve created, from swaying head banging riffs to simple, three note bottom string melodies… in completely arrhythmic timing.  Their nervous fits and starts can only be appreciated if you don’t have any idea where they’re trying to go.